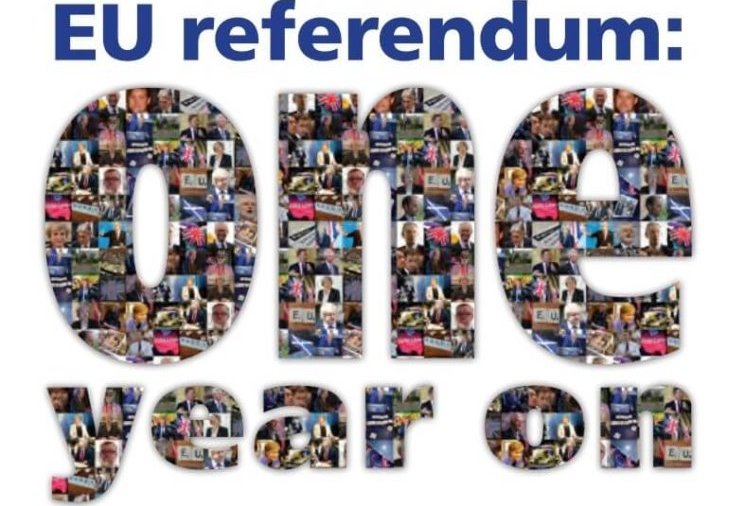 The UK’s decision to leave the EU on 23 June 2016 has given birth to new political identities, a new report by The UK in a Changing Europe shows.

EU referendum: one year on, commissioned by the Political Studies Association, demonstrates how the referendum has produced new political allegiances based on the Leave-Remain divide. A year on, nearly three-quarters of people think of themselves as Leavers (38%) or Remainers (35%) – a similar proportion to those who identify with political parties.

Leave and Remain cut across the traditional class base of Britain’s two party system. It also seems Brexit has paved the way for a return to two-party politics.

During the snap election, a new type of politics sprung-up: “Brexit Blairism” – which saw Jeremy Corbyn seize the centre ground on Brexit, much like Tony Blair did on economic issues in 1997. Brexit Blairism helped blunt the Conservative’s appeal in Leave areas, while allowing Labour to promote a ‘softer’ alternative to ‘hard’ Brexit in Remain areas.

Professor Anand Menon, director The UK in a Changing Europe, said: “Profound and fundamental political changes have occurred since the referendum and it remains to be seen how durable they prove to be.

“It is hard, if not impossible, following the snap election to know how the Brexit negotiations will go. The attitude our fundamentally divided, between and within parties, Parliament will take is crucial and impossible to predict.”

The 62 page, 28 chapter report (attached), written by 38 leading academics, covers politics, economics, public opinion, public policies, the implications for the nations of the United Kingdom and relations with the EU following the UK’s referendum last year.

Brexit has precipitated significant changes in the orientation of domestic economic policy, by reducing the emphasis on fiscal restraint and deregulation of David Cameron’s government. The report finds the May government is arguably the least ‘liberal’ in economic orientation for four decades.

The UK is far more exposed to Brexit trade related risks than any other EU state except Ireland. Germany and the Netherlands will be less affected by Brexit than the UK and many other member states will feel almost no effect. Authors conclude that the economic strength of the UK’s negotiating position is far weaker than the British public understands.

Implications for the UK’s regions and nations

One year on from Brexit, the report shows that there is little to indicate the UK Government has engaged seriously with the devolved administrations. This will be particularly striking when EU powers – or ‘competences’- start to come back to the UK. The UK Government has indicated that it intends to reaffirm Westminster’s supremacy but after nearly 20 years of devolution, Scotland, Wales and Northern Ireland argue that powers that return from Brussels over devolved matters like agriculture must go to them, along with appropriate means to finance them. A constitutional clash over such powers may provoke further moves towards Scottish independence.

Highly sensitive issues have been thrown-up in Northern Ireland following the referendum. The report’s authors note if it is not handled well there is potential for “significant disquiet”, both from staunch nationalists opposed to any physical manifestation of a north-south border, as well as hard-line unionists whose identity demands free movement with the rest of the UK.

The report finds that UK regions that voted Leave tend to be those most dependent on EU markets for their prosperity and are most likely to be exposed to Brexit. Compounding this problem, unlike recently constituted city-regions, these areas effectively have no representation. The final UK-EU agreement is likely to have very different impacts on the UK, potentially undermining efforts towards economic rebalancing.

One year on, there is a growing realisation of the “profound implications” Brexit will have on the UK’s environment, including agriculture, fisheries, climate and energy. Former environment secretary Andrea Leadsom noted a third of EU environment policy cannot be copied into UK law (through the Great Repeal Bill) as it makes reference to EU institutions. It is unclear whether the UK will develop alternative governance arrangements to replace these and whether, in devolved areas such as the environment, these will be centralised or devolved. Determining who decides those standards, and their level, will be politically challenging.

The uncertainty and lack of clarity about what Brexit might mean for British nationals in the EU, authors note, “is profound and is causing significant unease”. The referendum result also came as a shock to many EU nationals in Britain, with evidence pointing to an increase in mental health and anxiety disorders. Following the vote it quickly became apparent that promises from Vote Leave that these groups had nothing to worry about were either ignorant, deceptive or both.

Professor Menon said: “Much has changed over the course of the last year, but there is evidence far from enough has been done to think through the process of leaving the EU and the structures and policies we will need once we have left.”