Brexit: the board game 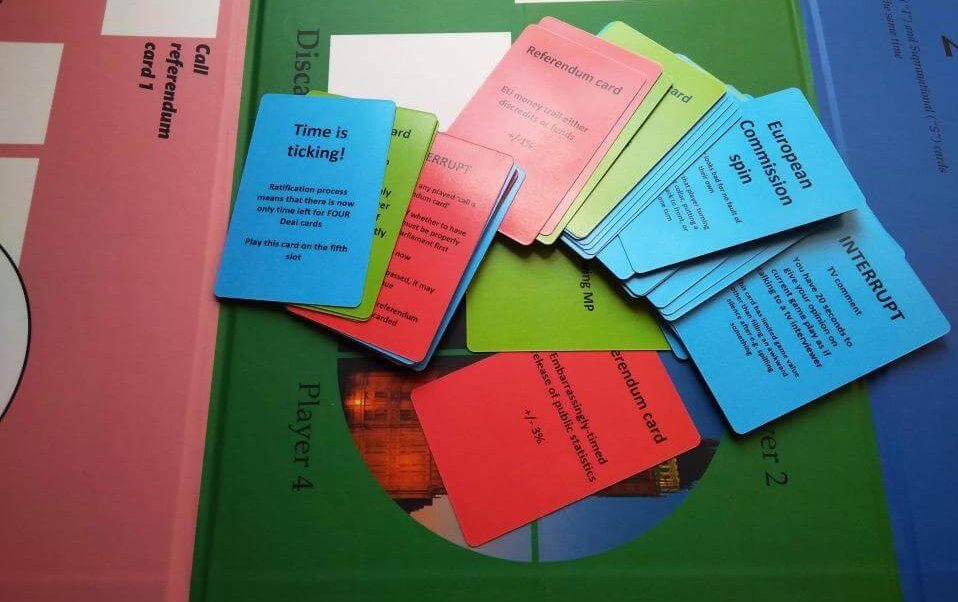 Simonides, when asked by Hiero to explain the nature of God, kept putting it off. When challenged over the reason behind the repeated delay, he answered, “Because the longer I deliberate, the more obscure the matter seems to me.”

Much the same can be said of the EU; and the corollary equally applies to requests to comment on any given aspects of it – or, worse, devise policy.

The topic is really, after all, a bandwidth of subject matter. One can no more be a true expert in ‘the EU’ than one can have a complete grasp of everything on every civil servant’s desk across Whitehall – past and present.

These considerations have inspired an attempt to turn the subject of the Brexit talks into something more generally accessible. The result is a commercially-available product. Brexit the Board Game seeks to replicate what has been going on over the last two years.

The game’s principles are relatively straightforward. Players randomly pick as their objective the type of Brexit end deal they want. Different elements of deal carry different scores, and some are incompatible.

Success is measured by getting a similar number of points cards on the table. By contrast, concluding with zero points cards on the table means a chaotic no deal end scenario, where everyone loses. The board itself is divided into three sections: negotiations at the top; parliamentary machinations in the middle; and at the bottom a section for if a second referendum is called – which is unlikely, but possible.

But does it work? I first road tested it with a journalist and some former colleagues from one of the referendum campaigns. By a quirk, the person who started the game, and who thus had to define what Article 50 was, had sat on the Praesidium that had drafted it so that turned out to be not too much of a challenge. Disappointingly, another attempt to road test it in the Whips Office during a lull in one of the key EU debates was curtailed when the Chief Whip walked in.

In any event, it does work. It also worryingly seems to bring out the worst in people, like the person whose MPs at the last minute blew up a deal out of spite, so everyone lost. I’m hoping that’s not replicated in real life. The cards themselves contain a mixture of elements that inform and amuse, and clearly do get people talking about what is going on both in the game and diplomatically/politically.

Might it be replicable as a mechanism in other academic fields? I suggest it could, subject to considerable constraints – not least of time and effort, and with an added caveat. The Brexit game is printed off on a made-to-order basis and isn’t Poundshop territory.

Board games generally have become very expensive over the last two decades. But there’s a way round this to achieve wider use. Our own aim is to have the proper quality hard copies on the market for serious gamers and for those who want to use it instructionally; and for those with large school classes, we can ensure that the wider classroom can also have access by giving them a way to print off large numbers of an ephemeral but free paper version they can try out too.

We’ve experimented with this model before. While Cameron was angling for a deal that he could peg his promised referendum on, we replicated those talks by coming up with The Renegotiation Game. This was available for free online, for anyone with a printer, paper, scissors, a little sticky backed plastic, and Blue Peter levels of patience. The topicality of that subject matter has not since aged well. But it’s shown the model is possible.

Summer is drawing to a close. The Brexit deal is still months away. If you are looking for a way to pretend to be busy at work while keeping in out of the rain, you can do worse that unleashing the gin and tonic while playing at Olly Robbins.

By Dr Lee Rotherham, Director of think tank The Red Cell, Executive Director of Veterans for Britain and Chairman of the appeal to establish a Museum of Brexit.