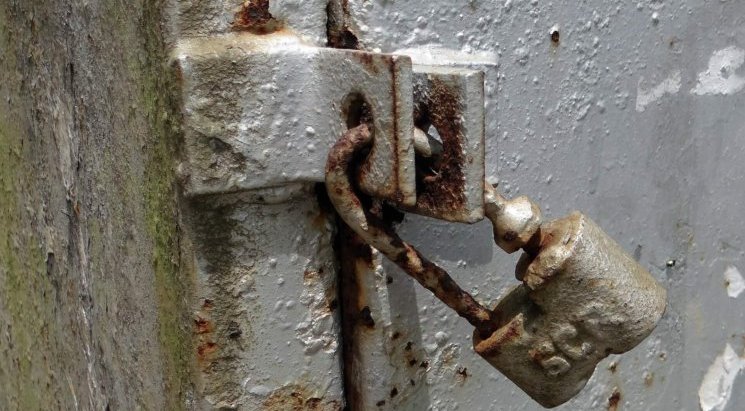 Managing the Brexit negotiations deadlock: Transforming the game from chicken and prisoner’s dilemma to a cooperative game by evaluating the mutually hurting stalemate (MHS)

Brexit negotiations involve several rounds of negotiations and therefore iterated games, i.e. repeated games with memory, are insightful to analyse negotiators’ strategies. In theory, repeated rounds increase the opportunity for cooperative behaviour. Nonetheless, to date we have witnessed strategies associated with the ‘game of chicken’.

In a Brexit negotiation chicken game metaphor, two negotiators are headed for a single-lane bridge from opposite directions. The first to swerve away yields the bridge to the other. If neither swerves, the result is a deadlock and a fatal crash. In this case a no-deal exit. The game is based on rationality and the expectation that the other party is reasonable enough to swerve.

This reflects both EU and UK strategies thus far. So here we are now, standing in the middle of a bridge at a costly deadlock, a breath before no deal. The UK expects the EU to act rationally and proceed to trade talks. The EU expects the UK to settle the bill first and then discuss trade agreements. Besides, the EU negotiates trade agreements only with third countries and the UK needs to be one before trade talks commence. 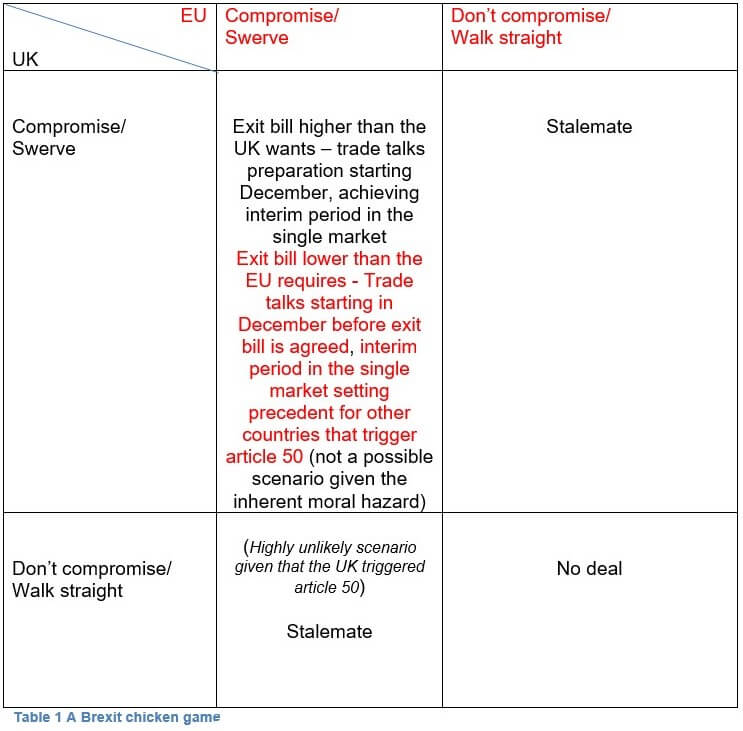 Proof that Brexit negotiations have been played as a chicken game comes from May’s recent speech which revealed her preparedness to walk away without a deal supported by placing Hammond in charge of contingency planning.  Obviously, the chicken game’s underlying ‘logic’ that risky behaviour is bound to be rewarded given the judiciousness of the other, has proved unproductive since we are at deadlock.

Chicken game bargaining is inappropriate for another reason. The possibility for both parties to compromise is eliminated due to what Llewellyn termed, the moral hazard. In other words, that the UK must be seen not to gain by Brexit in order to avoid other member states seeking concessions or considering exit. And the British side has failed from the start to recognise its seriousness.

The model of prisoner’s dilemma is also insightful providing for cooperation that the chicken game does not. The behaviour of both the UK and EU accords with the early rounds of this iterated game showing evidence that more rounds are needed to find a winning strategy. What is interesting in this game is that although it prescribes rewards for cooperation and penalties for mutual non-cooperation, the reward for unilateral non-cooperation exceeds both the benefit from mutual cooperation and the cost of mutual conflict.

Arguably, triggering Article 50 constitutes a declaration of non-cooperation always leading to stalemate. Therefore, cooperative strategies become the only option in this negotiation. They do require, however, a change in mind sets as well as seizing the ripe moment of the mutually hurting stalemate.

According to Henry Kissinger (1974), ‘stalemate is the most propitious condition for settlement’. A stalemate can effectively lead to a ripe moment in the negotiation, which if seized can produce a successful outcome. The concept centres on the parties’ perception of a Mutually Hurting Stalemate (MHS), which according to Zartman (1985) is associated with an impending catastrophe. When the parties find themselves locked in a deadlock that is painful to both (although not necessarily in equal degree or for the same reasons) the costs of the MHS need to be evaluated and the strategies to be developed within the Cooperation- Cooperation sphere.

This translates to a shift away from fixed pie or zero-sum approaches and into a value creating process where payoffs are increased for both parties. This might mean a post-Brexit deal different from the Swiss or Canadian.

Given that reckless and non-cooperative behaviours have led to a deadlock, future strategy should not be associated with concessions. Instead negotiations should become a cooperative game characterised by commitment, trust and the use of mediation to exit the MHS and achieve a more successful outcome. 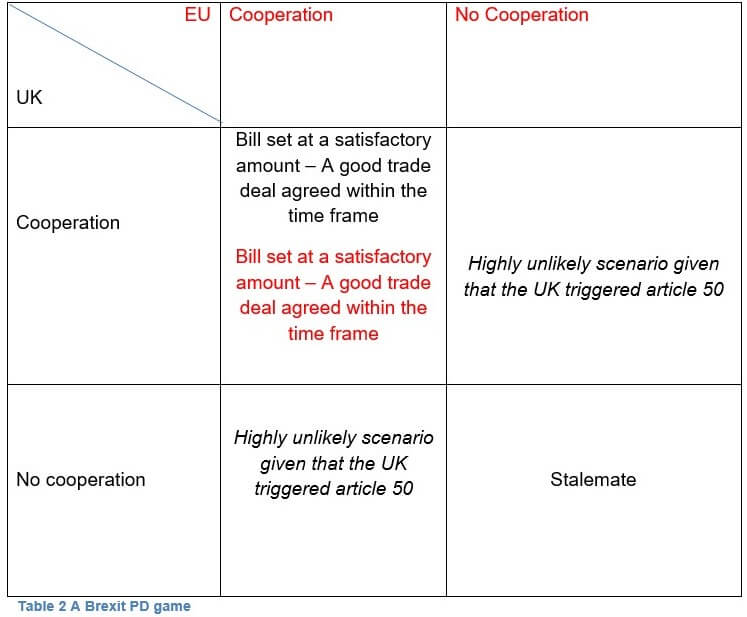 By Elena Georgiadou, research investigator at The UK in a Changing Europe.