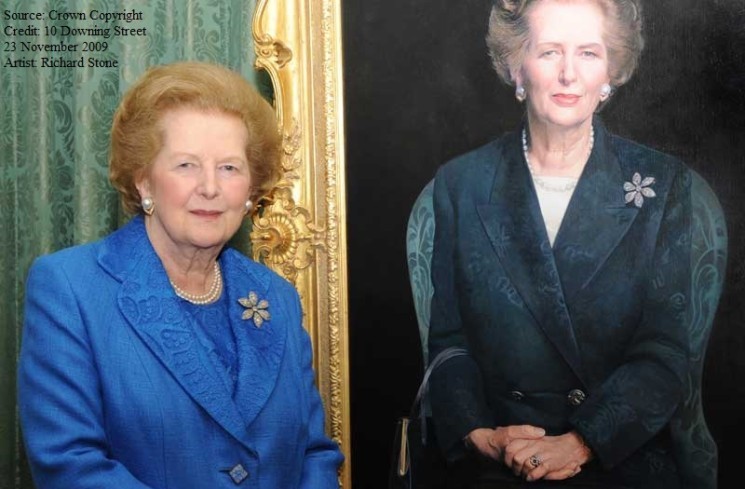 There has been some controversy in recent weeks about what the late Baroness Thatcher would have thought of Brexit. Lord Powell, her private secretary, recently said she would have re-negotiated membership and then backed a vote to remain. Lord Tebbit dismissed this opinion as that of an ‘apparatchik, and not a politician’ – and suggested that the Iron Lady would be in favour of Brexit. But if speculation about Thatcher’s opinion on the EU referendum is to be the order of the day, we should at least base it on a nuanced view of her historic legacy.

Thatcher’s uncompromising and often provocative rhetoric regarding European integration is probably best remembered through three famous public statements: “I want my money back!”; “We have not successfully rolled back the frontiers of the state in Britain, only to see them re-imposed at a European level”; and “No, no, no!”. The first summed up her negotiating strategy during the five-year struggle with her continental counterparts about Britain’s contributions to the European Community’s budget, a fight from which she was to emerge victorious in 1984. The second was the most trenchant sentence in her Bruges speech of 1988 about the future of the European Community. The third represented her adamant rejection in October 1990 of propositions to increase the powers of the European Parliament and the European Commission.

These bombastic statements demonstrate Thatcher’s readiness to fight to the bone for Britain’s national interest within the European Community, and they rather give the impression that she was an aggressive critic of European integration. But these must not blind us to the fact that there was much more to her European policy. The European integration process underwent a significant re-launch during the mid-1980s, after at least a decade of deadlock. By helping to bring about the Single European Act in February 1986 (the first significant change to the Treaties of Rome of 1957) she was, in fact, a central architect of European integration.

The moment to achieve those aims now appeared to have come, because the completion of the single market was also the flagship project of the incoming Commission president, Jacques Delors. His appointment was settled at Fontainebleau, behind closed doors and without Thatcher’s knowledge, between the German Chancellor Helmut Kohl and the French President François Mitterand. While Thatcher was greatly surprised by Delors’ candidacy (she had expected, and been ready to support, a German, but not a Frenchman) she accepted it without quarrel once she was informed about it several weeks later.

She sent the successful businessman and former member of her own cabinet, Lord Francis Arthur Cockfield, to Brussels to work under Delors as commissioner responsible for the Single Market. Cockfield’s appointment was Thatcher’s personal choice, one that she had to defend even to her private secretary, Lord Powell. It was probably also Thatcher’s most significant contribution to the conclusion of the Single European Act. With astonishing speed and impressive thoroughness, Cockfield produced a coherent programme for the completion of the Single Market in the form of a White Paper, which was to form the basis for the new treaty.

Thatcher’s dedication to the idea of a completed Single Market was such that she made considerable concessions during the negotiations to bring it about. The biggest compromise of all from her perspective was to accept that the programme for the Single Market would take the form of a legally binding treaty, rather than a mere agreement. When the majority of the member states called for an Intergovernmental Conference to draw up the treaty, Thatcher was fuming with anger, but she did not walk away from the negotiations. Pressured by Kohl, she even agreed to having monetary cooperation on the European level mentioned in the preamble of the Single European Act, something which she had really wanted to avoid.

The Single European Act had enormous ramifications for the way the European Community was to be run. No only did it provide for the completion of the Single Market, it also simplified the decision-making in the European Council by extending the principle of qualified majority voting to a large number of issues that until then had been decided unanimously.

As a result, it paved the way for the series of integrative measures that were pushed through during the late 1980s, leading to the Treaties of Maastricht in 1992. It was when Thatcher understood these consequences that she began to turn against the European Community in general and Jacques Delors in particular. She had come to realize that the commission president did not share the British hopes for ‘Thatcherism on a European scale.’ Still, Thatcher’s and Delors’ interests had been temporarily aligned for a short and decisive moment, with very lasting consequences for the European Community.

Helene von Bismarck received her PhD in modern history from the Humboldt-University in Berlin. Her first book analysed Britain’s imperial role in the Persian Gulf during the 1960s (Palgrave Macmillan 2013). She is now working on a book about Margaret Thatcher’s relationship with Jacques Delors.