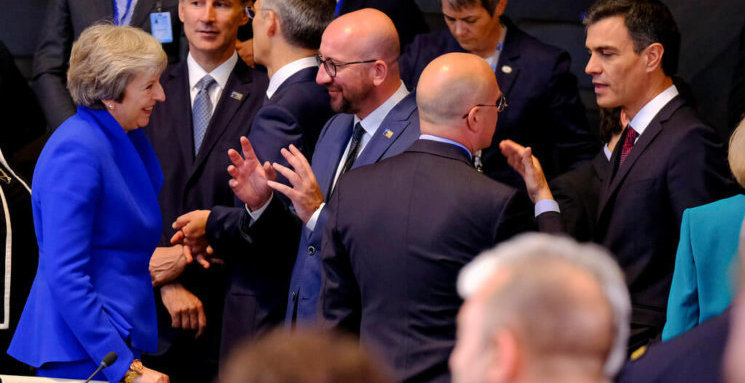 This week’s NATO Summit in Brussels has been about placating the US President, demonstrating to him the value of NATO and the contribution of European allies. But what does this mean for the UK’s future security cooperation options?

Most importantly, it reinforces a growing conviction in British defence circles that relying solely on the ‘special relationship’ is unwise.

After Brexit, the UK will need to find ways of cooperating with its European allies, particularly France. Moreover, the original British rationale for the Saint Malo agreement, which kick-started the EU’s Common Security and Defence Policy (CSDP) – cooperating to gain greater European military capability so that the US would remain committed to NATO – remains convincing. NATO-EU relations are nothing new, but are becoming increasingly important given the challenges facing Southern and Eastern Europe. The NATO Summit communiqué reaffirms that the EU ‘remains a unique and essential partner for NATO’.

Greater emphasis on NATO-EU cooperation has the potential to displace the UK from the front and centre of European security and defence decision making. This is a fundamental challenge to the UK’s military power status.

As a non-EU member state, the UK, it is currently thought, will only be able to participate in the CSDP as a ‘third state’ with no decision-making power. Importantly, this seems likely to exclude the UK and its firms from the European Defence Fund, which aims to increase collaborative armaments cooperation particularly at the development stage.

Brexit also may reduce the attractiveness of the UK as a partner in major armaments collaborations. The Franco-German decision to embark on developing a Future Combat Air System without the British is potentially the first signal of what may happen, particularly if, as Airbus has warned, trade barriers between the UK and EU make trans-European manufacturing including the UK less viable.

As the UK’s closest European defence ally, France is also concerned about the UK’s reliability as a partner both in terms of commitment to operations and in its financial reliability for armaments cooperation post Brexit (an earlier Franco-British FCAS project appears to have collapsed due to British inability to financially commit to the next stage).

Increased defence spending has been a key outcome of this week’s NATO Summit, with Trump also calling for NATO allies to exceed the 2% NATO target and spend 4% of GDP. Despite defence spending being a rather superficial way of measuring commitment to NATO it is nevertheless the one the US President has chosen to focus on.

Germany has been a particular target of Trump’s remarks but the UK too is under pressure, despite meeting the 2% target. The announcement on the opening day of the NATO Summit that the UK would increase combat troops in Afghanistan may have been an attempt to placate an American perception that the UK is not contributing enough but appears to have failed.

A letter last week from US Defence Secretary James Mattis, warned that the UK’s role as a leading military power ‘is at risk of erosion’. Meanwhile Trump has warned that France could replace the UK in the ‘special relationship’ – France has worked closely with the US in North Africa and the Middle East.

Downing Street responded that it remained the biggest defence spender in Europe but could not commit to maintaining the UK’s position as a ‘tier 1 military power’ – Brexit will put a strain on public finances.

In leaving the EU, and with NATO under challenge from a US President who wants to see European allies do more to defend themselves, the UK finds itself increasingly isolated. There is though one initiative that may bridge some of the gaps in Britain’s post Brexit security cooperation needs – the French-brokered European Intervention Initiative (E2I).

The UK, along with eight other European states, has signed up as the initiative will function outside the EU structures. This could potentially offer the flexibility that the CSDP has always struggled to provide.

While details remain sparse, if the E2I does produce deployable European forces, and the political will to use them, it could go some way to countering the more justifiable US complaints about burden-sharing in NATO. It also provides a useful way to keep the UK embedded in European defence cooperation.

The UK’s security cooperation with traditional allies is already under strain, and post-Brexit this will only intensify. The crisis within NATO is a complication as it increases the importance of European defence cooperation.

The pressure from the US for European allies to be seen to be able to defend themselves, has inevitably led to an increased emphasis on NATO-EU cooperation.

For the first time perhaps, the UK’s position as a leading NATO member is under threat because it will remain a member of only one of these organisations. Moreover, Brexit will do nothing to placate US perceptions that the UK is not pulling its weight on defence spending.

There is one area of hope, if E2I comes to fruition the UK’s involvement may mitigate such outcomes and maintain the UK’s role in European defence cooperation. Alternatively, as May warns, the UK may need to accustom itself to no longer being a ‘tier 1 military power’.