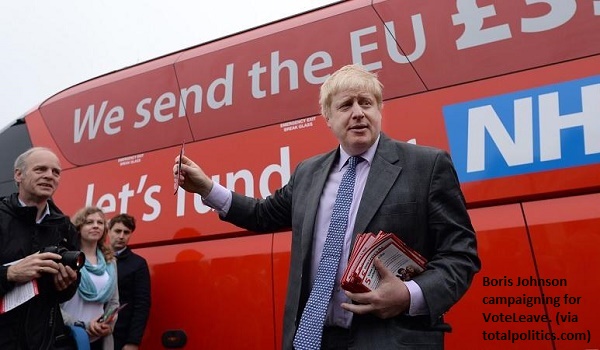 Remember that red bus with the promise of £350 million per week more for the NHS? Like so many bus services, there might be quite a long wait and a far from negligible risk of cancellation. Quite apart from the post-referendum admission by prominent Leave campaigners that the amount promised was always a bit of a porky, the negotiations around EU budget contributions could be far harder than has so far been acknowledged. They are a ticking-bomb that, if it explodes, could wreak severe damage.

Four distinct issues arise, in addition to the fact that even under the most optimistic scenario, the direct benefit to the UK tax-payer would be barely half the £350 million, as explained in previous UK in a Changing Europe and IFS analyses.

First, there will unavoidably be transitional costs associated with leaving the EU. The UK has made firm commitments to fund current EU spending programmes, some of which will last well beyond the Brexit date of Spring 2019 implied by the Prime Minister when she announced that the UK would trigger Article 50 no later than March next year. Because Article 50 sets a two-year time limit (unless the 27 other EU members agree to extend it), the UK will still be a full member of the EU until the conclusion of a Brexit deal and thus liable for its share of funding any EU projects agreed before the deal is implemented. As highlighted in an article in the Financial Times on 13 October, some of these commitments could last as long as 2023. Some sort of deal will also have to be done to divide up EU assets (buildings, equipment and so on) and liabilities, ranging from the pensions of retired staff of EU institutions to possible calls on guarantees on lending by the likes of the European Investment Bank.

Second, depending on the future arrangement for UK access to the EU single market, there may be a club membership fee to be paid, as is currently the case for the three EEA countries and, to a lesser extent, for Switzerland. For Norway, these payments include a sizeable contribution to supporting economic development projects in the countries of central and eastern Europe, as well as participation in EU research and student exchange initiatives. Paying any money into the EU after Brexit will not be understood by, let alone popular with, voters who were persuaded by the red bus. Yet there may be a compelling case for the UK to continue to participate in EU programmes, including those covering research, security or Europe in the world.

The third dimension of public finances is how they are affected by the economic consequences of leaving the EU. Tax revenue is, as a rule of thumb, proportional to GDP, accounting for around 37%. Any change in GDP will, as a first approximation, lead to a corresponding change in tax revenue and there will also be some change in automatic public expenditure, such as on benefits linked to unemployment. Most projections published prior to the referendum indicated that there would be some loss of GDP compared with what it would otherwise have been, but with quite a wide range depending on the future trade regime and changes in how the UK is regulated. If these projections are accurate, the UK’s public finances will suffer.

How Brexit affects the finances of the EU is the fourth, arguably under-appreciated, issue. The departure of Britain will mean a reduction of up to the full UK gross contribution to the EU’s revenue, depending on whether the future relationship includes some continuing fi­nancial contribution. To put it in perspective, the loss of the British gross, post-rebate contribution is equivalent to most of the budget line entitled ‘Competitiveness for growth and jobs’. It is also the same order of magnitude as the gross contribution of all twelve member states who acceded to the EU in 2004 and 2007.

Some spending from EU programmes accrues to Britain, such that the net con­tribution is lower, but the loss of the UK payment would still leave a big hole to be filled, prompting an obvious question: will the other net contributors agree to pay more, or will today’s net recipients be obliged to accept lower EU expenditure? Formally, the EU’s spending plans are embodied in the Medium-Term Financial Framework (MFF) in which the agreed expenditure determines how much member states have to con­tribute. Unless the current MFF is over-ridden, the net contributors (not least Germany) will face a high­er bill for the EU at a time when this could prove po­litically awkward.

The implications of all this for the Brexit negotiations and the underlying politics are twofold. Within the UK, the promise of a ‘Brexit dividend’ releasing resources to spend more on the NHS will, at best, either be postponed until well into the next Parliament or will entail a large exit bill in the year in which Brexit happens. Even then, the amount ‘freed’ will fall well short of the headline total of £350 million per week and if the UK agrees to make some payments into the EU along Swiss or Norwegian lines, the sum would be lower still. Moreover, this best case could be negated or even reversed by any GDP loss.

The effect on the rest of the EU, though, risks being much greater for two reasons. There will, first, be an immediate need to replace the UK contribution, pitting net contributors against net recipients. Second, by the end of 2018, the EU will already be in the initial stages of bargaining about the plans for the next MFF, covering 2021-27. From past experience these are fraught negotiations which make agreement on other matters all the more difficult. For both reasons, the UK may find itself blamed for the resulting acrimony and that does not augur well for the Brexit negotiations.

As the punchline in one of the catchier songs in the film Cabaret put it: ‘Money makes the world go round’. Or not…