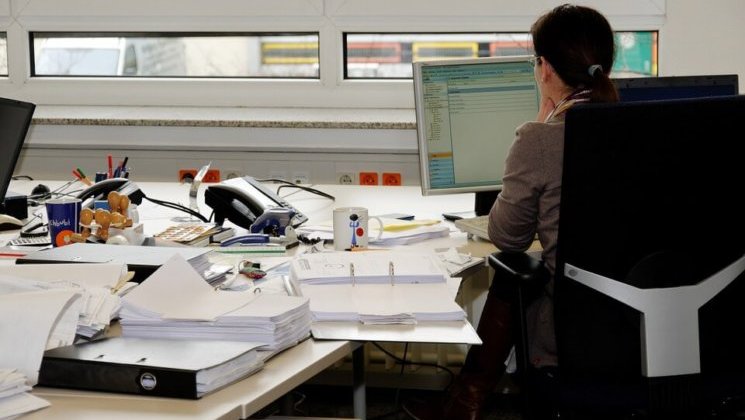 The Prime Minister is fond of repeating her ambition to create a fairer and more prosperous Britain. Jeremy Corbyn, for his part, speaks of the need to deliver a ‘jobs first Brexit’. Yet in keeping with much of the contemporary political debate in this country, we remain none the wiser as to how either of them intend to achieve their respective aims.

Indeed, no-one knows for sure what the impact will be of Brexit on jobs across the UK’s regions. However, economic modelling I have carried out provides us with significant findings.

We can predict the impact of Brexit on jobs by comparing two scenarios: one where Brexit has no effect and one where it will reduce inter-regional trade.

This Brexit effect is based on an assumption that trade between EU and UK regions only falls by 2%, the rationale being that if even this small reduction produces an appreciable job shortfall then we can be assured that larger, and possibly more realistic, trade reductions will have a correspondingly larger impact.

Job shortfall is not the same as job loss. It measures the jobs that new trade arrangements would need to generate to make up for any Brexit effect. For example, by 2025 assuming a 2% reduction in UK-EU inter-regional trade, the job shortfall for Greater Manchester is predicted to be 0.6%, which amounts to 5,800 jobs fewer than would otherwise be the case with no Brexit effect. For Inner London, the corresponding figures are 1.7% and a 66,500 job shortfall.

Looking across Europe—covering 255 EU regions, including 37 UK regions—there are quite diverse effects.

Figure 1 below shows the job shortfall in 2025 across the UK and Ireland. The UK regional impact is focussed squarely on London and the greater south east of England, as well as major conurbations such as Manchester, Birmingham and towns and cities in west Yorkshire.

Figure 1: % job shortfall in the UK and Ireland 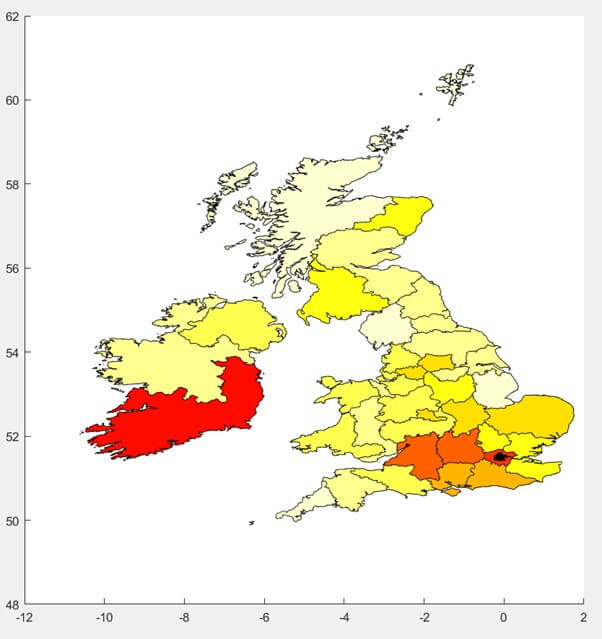 More peripheral and rural UK regions fare much better because they are less embedded in UK-EU trade flows.

Figure 2 shows the distribution of the scale of job shortfall in each region. While inner London is predicted to see a job loss of 1.7% by 2025, most regions—especially outside the south east of England—will only experience 0.5% or less.

Figure 2: the distribution of the job shortfall 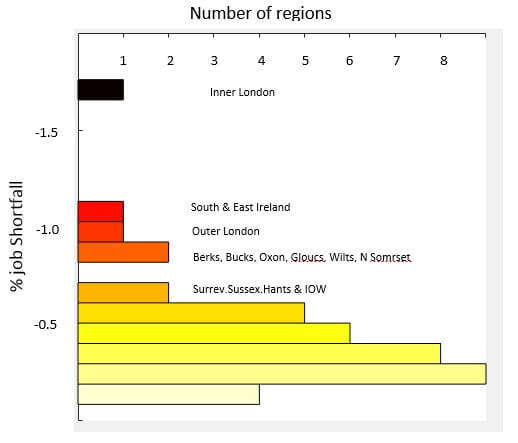 The data for Ireland has also been included because it is the worst-affected EU region. This conclusion is also supported by work done at the City REDI Institute, which has found a similar high exposure for Ireland in terms of GDP. The job shortfall predicted for the southern and eastern region of Ireland is approximately 1%, on a par with the second-worst UK region, which is outer London.

Generally, doubling the assumed trade reduction doubles the job shortfall in turn, so there is a close relationship between the scale of trade reduction and jobs that would need to be made up by other means.

For example, if EU-UK inter-regional trade fell by 4%, London’s predicted job shortfall would be 3.4%, with corresponding decreases across all regions. Incidentally, these are modest numbers compared with the magnitude of trade reductions that can be found in the literature, as evident in the work of Swati Dhingra.

But whatever the magnitude of the impact of Brexit on trade, the map would look the same, but with deeper shading.

The data just described assumes trade reduces by 2% across all sectors, industries, services and the rest. However, services are most important for the UK economy.

The picture that emerges when focussing on services is more extreme in terms of regional diversity than when we consider all sectors.

To measure the impact solely on services, we can compare the effect on employment of a 2% reduction of EU-UK regional services trade with trade patterns as they are currently. The outcome is mapped in Figure 3 and summarised in Figure 4.

Figure 3: % job shortfall due to services 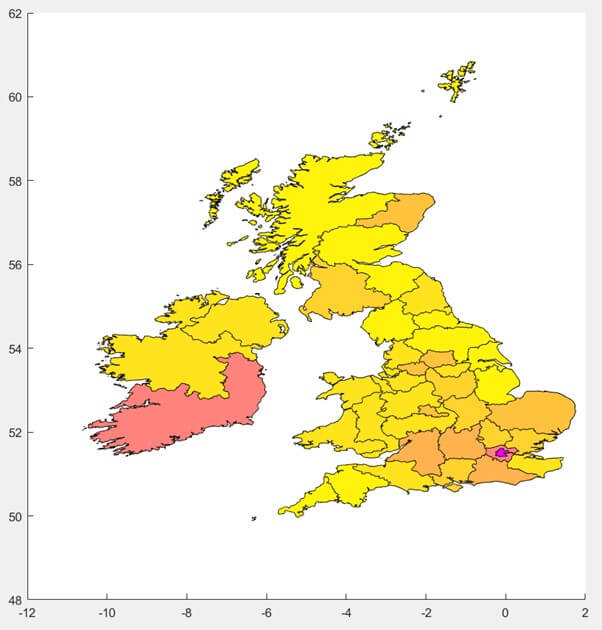 Figure 4: the distribution of the job shortfall in services 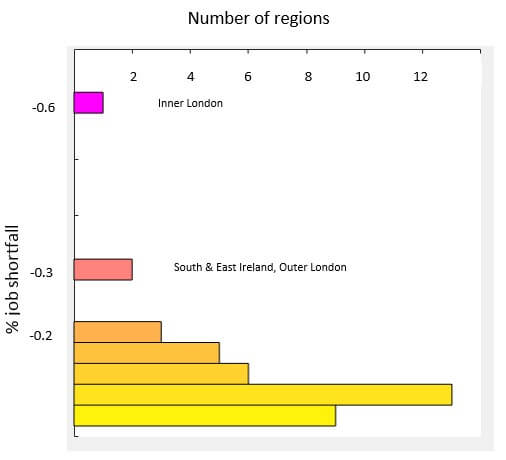 The percentage job shortfall is less than the overall picture because this considers only part of the economy. Nevertheless, reduced services trade leads to a 0.6% job shortfall for inner London. Outer London has half this level, and all other UK regions are below 0.2%.

Also included on the map is the worst-affected non-UK regions, which are again the southern and eastern regions of Ireland, also with a 0.3% job shortfall. However, the fact that an EU region is as badly affected as Outer London is misleading because most EU regions are unaffected. In fact, over 200 of the 255 regions considered have an almost zero affect due to service trade reduction.

The impact of Brexit due to services sector trade reduction is focussed very much on Inner London, much more so than is the case with trade as a whole. This has considerable implications for the kinds of policies that should be pursued in order to offset a negative Brexit impact.

Manufacturing exports might be stimulated by monetary policy involving a weaker pound, enabling freer access to foreign markets for industrial products. However, this is unlikely to help services sector employment as much.

Regions specialising more in manufacturing may benefit from access to non-EU markets in terms of employment, but it is possible that negotiations relating to the freer entry of services into foreign markets will be more complex than for goods, and it is less certain that service jobs can be so easily protected. 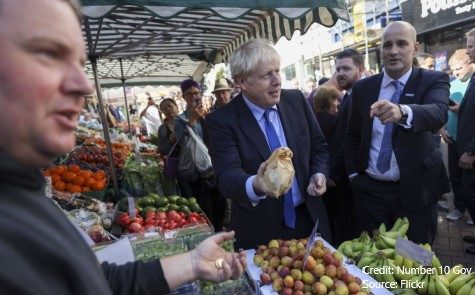 Why Britain’s values divide should matter to Labour 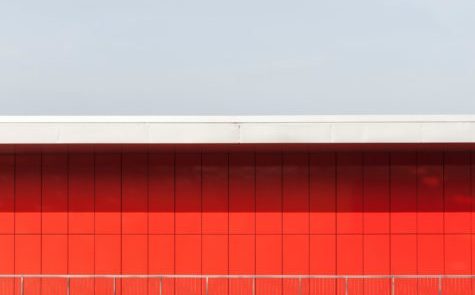