The UK’s place in the world and EU membership 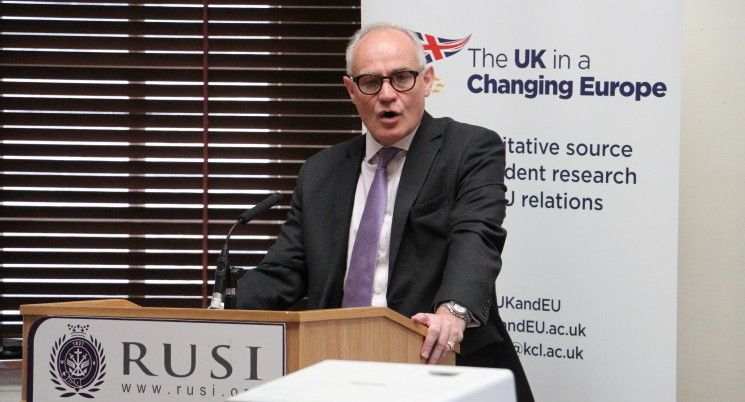 “The referendum on membership of the EU offers the UK a once-in-a-generation opportunity to assess critically its role in the world today, and to decide what kind of foreign policy actor it seeks to become in future.” That is the message that all members of the House of Commons Foreign Affairs Committee agree on in its latest report on the implications of the referendum on EU membership for the UK’s role in the world.

As Chair of the Committee, and with a membership split down the middle (5/5) on the issue, the objective I set was to produce a balanced, unbiased analysis, presenting both sides of the argument. Addressed to the electorate rather than government, I hope that the report can inform debate around whether and how the EU helps or hinders the UK in achieving its key foreign policy objectives and the impact of UK withdrawal from the EU on our international relations and trading relations.

The report sets out the key issues and potential risks and opportunities, and it poses the central questions. However, because of the spectrum of views among the members of the Committee – and, indeed, because of the difficulty for both sides in accurately predicting what a ‘Brexit’ or ‘Bremain’ would mean for the country’s future – the report deliberately doesn’t give answers or recommendations.

The report asks some key questions. How far does UK membership of the EU affect the UK’s international standing and help multiply UK influence? Does withdrawal mean the UK will be perceived, rightly or wrongly, as more isolationist? Alternatively, would it present an opportunity for the UK to affirm a unique role as a foreign policy player close to, but independent from, both the US and Europe?

These are questions which required us to look at UK influence over EU foreign policy, UK interests regionally and globally, and how – and how well – the EU acts as a foreign policy player.

We explain the distinction between the Common Foreign and Security Policy (CFSP) and Common Security and Defence Policy (CSDP), where the EU acts only on the basis of unanimous agreement, and other EU instruments and competencies which can influence state security and state behaviour, such as development assistance and trade agreements. In these areas there is qualified majority voting and a challenge in coordinating policies between the European External Action Service and different directorates of the Commission. There is also the role that enlargement has played and could still play in encouraging candidate countries to pursue democratic and economic reforms.

In developing a CFSP and CSDP, the UK and other EU member states, try to get ‘the best of both worlds’ in the sense that they can use the ‘multiplier effect’ of the EU to build support and resources around a common position, but they can ultimately veto any proposal which runs counter to national interests.

This flexibility has meant the UK can act alone or through other alliances in military interventions, such as in Iraq, Afghanistan, Libya and Syria, but we can work through the EU on other issues. Iran, sanctions against Russia, and civil-military operations such as the anti-piracy mission (Atalanta) off the coast of Somalia were highlighted as examples in evidence to our Committee.

In trade, development, energy and the environment, the decision making process is more complex with more institutional players (the European Parliament has a formal role and the European Court of Justice is the final arbiter). This presents practical difficulties for coordinating actions under each of these competencies in pursuit of a bigger ‘macro’ foreign policy objective. Nevertheless, we heard from High Representative Federica Mogherini that she is making an effort to improve coordination.

She gave the recent climate change negotiations as a good example, which she cited as a model for the future: “We developed last year… a common climate change diplomatic action plan, which we discussed, together with the Foreign Ministers, the Environment Ministers and the Commission. We adopted a common plan that we implemented everywhere in the world, with common messaging … which all 28 member states felt comfortable and strongly committed to. You cannot imagine in how many places in the world I have met Foreign Ministers, and even Presidents and Prime Ministers, who have told me, ‘The real difference came when it came to our own national position in climate change negotiations because of the strong, co-ordinated message we received from not only the EU delegation but all the member states of the European Union… this had a huge impact on our own national decision’.”

The report also discusses the ‘trade-off’ in trade negotiations, where the EU has an advantage in being able to exercise more clout than individual nations, but where there is a necessity for internal compromise between differing approaches and priorities towards different industries and sectors. In the report we recognise that what the UK might lose in collective weight, it could gain in flexibility and adaptability, becoming a ‘more nimble power that focuses on pursuing its core interests and alliances’.

The Committee was keen to invite voters to think about the long-term evolution of the EU and the UK’s interests either inside it or on the outside. On the one hand, there is the argument that, by staying in the EU, the UK can shape its evolution in a way that protects UK and transatlantic interests in European defence led by Nato and supporting stability, democracy and market liberalisation in our immediate neighbourhood. By being in the EU, as the third largest member state and with its military and diplomatic clout matched only by France, the UK can play a leading role in shaping EU foreign and defence policy, ensuring for example that a separate defence identity does not duplicate or, worse, undermine Nato in Europe.

On the other hand, there are concerns about the UK’s ability to influence developments and protect its interests as the eurozone ‘core’ needs to increasingly integrate politically as well as economically. It is unlikely that in the coming decades the UK is going to be prepared to fully sign up to the political integration which could underpin a more effective EU foreign policy and defence, including a European army. Therefore, the UK could be better off stepping aside to allow the rest of the EU to organise itself more effectively and to concentrate on pursuing an independent foreign policy, which would be, in all probability, in any case closely aligned with European and American policy, interests, and shared priorities.

Instead of reaching any conclusions, the report touches upon these and other issues which we believe voters should be considering, and assigning their own weight to in terms of their importance: from managing the UK’s trading relationship with the rest of the EU and the rest of the world, in or out; to managing the UK’s international representation and reputation, in or out; to considering the ways in which the EU and the EU’s external policies might develop with or without the UK in the EU. I hope the report will serve as a useful analysis as these issues continue to be debated throughout the referendum campaign.

Crispin Blunt is the Member of Parliament for the Reigate constituency and Chair of the Foreign Affairs Select Committee.