What MPs really think will happen after a no-deal Brexit

Theresa May is bringing back her Brexit deal back to parliament this week. She is doing so in the hope that MPs will come back from the season of goodwill primed to shower her with some of it, that compromise will be the order of the day and that her own troops at least might be willing to go along with her plan. Her hope, however, looks likely to prove forlorn.

Each year we at The UK in a Changing Europe, in collaboration with the Mile End Institute and Ipsos Mori, conduct a survey of MPs’ attitudes to Brexit. Our findings this year will not make for comfortable reading in Downing Street.

Indeed, our data suggests that, far from the Christmas break having softened parliamentary attitudes, the prime minister will encounter a House of Commons even more uncompromising than it was. 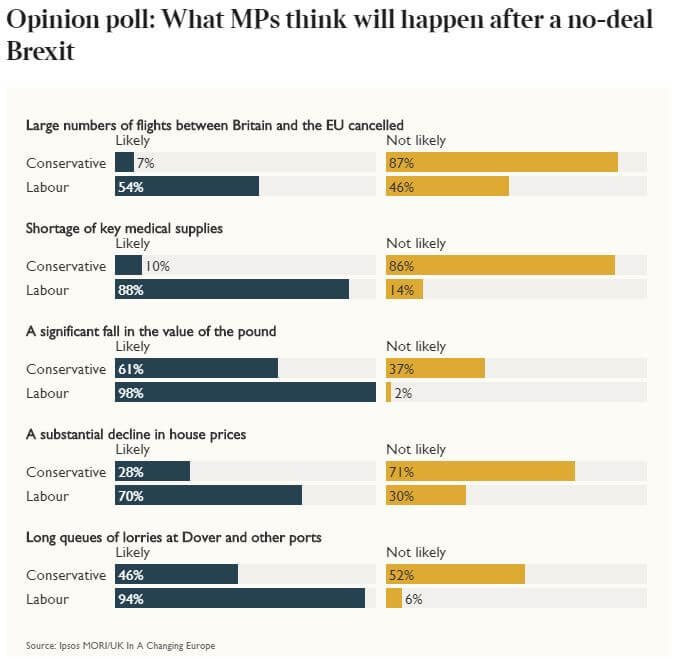 Since the prime minister’s fateful speeches at the Conservative conference of 2016, when she laid out a vision of a hard Brexit, she has rowed back. Chequers marked a significant softening of her position. However, MPs have not made that journey with her.

In large part, this is because Conservative MPs remain bullish about Brexit and in no mood for compromise. Some 70 per cent of Tory MPs are optimistic that the UK will be able to quickly sign trade deals with major powers, such as China and the US. And 85 per cent of Conservative MPs, and 95 per cent of MPs who voted Leave in the referendum, are convinced these deals will compensate for any loss of trade with the EU.

Indeed, 58 per cent of Conservatives believe these new trade opportunities are likely to more than compensate, leaving the UK economically better off outside the EU. Given this, the prime minister’s deal, which limits the UK’s ability to negotiate such deals, was always going to face significant opposition from her own side.

The prime minister argued on Sunday that the government’s moral obligation to the people of Northern Ireland made the backstop necessary. Yet, again, her own MPs simply do not agree.

The vast majority of MPs who voted Leave – 86 per cent – believe difficulties over the border are being exaggerated as a negotiating tactic. Indeed, only 30 per cent of Conservative MPs accept the premise that “there are genuine difficulties in finding a solution to what happens to the Northern Irish border after Brexit”.

Given all this, one option would be for the prime minister to accept that the hard core Brexiters are a lost cause and to tack towards a softer form of Brexit to rally the necessary support, particularly among Labour MPs.

However, our data reveals that this approach is also likely to run into the sand. MPs calling for EEA membership, Norway Plus – or, in its latest manifestation, Common Market 2.0 – are also likely to be disappointed.

What is more, single market membership has become significantly less popular in parliament since our survey 12 months ago, when a majority of MPs, including 90 per cent of Labour MPs, supported such an outcome.

Opposition to the single market seems linked to unease about the obligations that a Norway-type Brexit would imply. When it comes to free movement, which single market membership implies, a significant majority of MPs, including both remain and leave voters, have reservations.

Two-thirds of the Commons, including 54 per cent of Labour MPs, believe that giving nationals from other EU countries the automatic right to live and work in the UK would not respect the referendum outcome.

Another route towards a softer Brexit would be permanent membership of a customs union – a core Labour party demand. Here again, however, the parliamentary arithmetic looks tight.

By a margin of 50-46 per cent (with a further few don’t knows), MPs think membership of a customs union would not constitute leaving the EU or honouring the referendum. Some 80 per cent of Conservative MPs are of this mind. Attempting this, in other words, might well lose the prime minister as many Tory votes as she gains Labour ones.

The prime minister must shoulder a significant amount of the responsibility for this state of affairs. Her own position has shifted, but she his signally failed to bring people with her, not least by failing to be honest about the trade-offs that Brexit might imply.

She has surreptitiously rowed back on her misleading claim that frictionless trade is compatible with leaving the single market and customs union, but without bothering to explain to her MPs or the public why she has done so. Little surprise, perhaps, that she now confronts a parliament that is struggling to face up to the choices it will soon have to make.