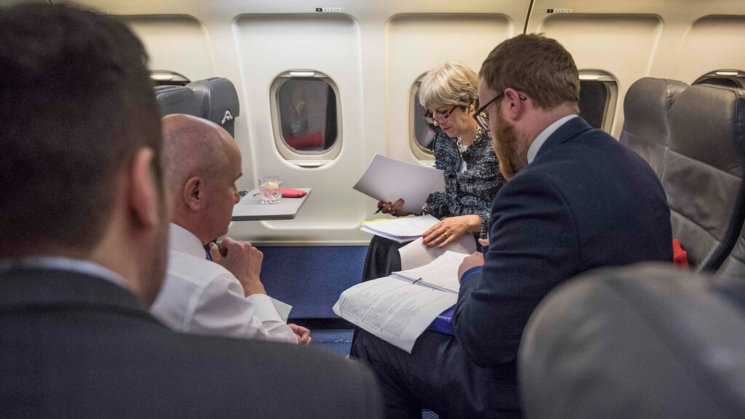 Plus ça change. 2017 roiled our politics. Strong and stable became weak and wobbly. Jeremy Corbyn lost an election and tightened his grip on his party. Twitter fell in love with the idea of a new party, while Nick Clegg, not to be outdone, urged voters to join (almost) any but his own. Yet amidst the hullabaloo, Brexit, like the eye of the hurricane, proceeded serenely on. Battered from all sides, it remained on track, heading in precisely the same direction as was set for it as the year dawned.

Little of this has felt smooth or orderly let alone both, despite the PM’s recent claim to the contrary. The year dawned with Sir Ivan Rogers resigning over the way Brexit was being handled. It continued with a defeat for the Government in the Supreme Court. It heated up still further as Labour were trounced in the locals and the Prime Minister came unstuck in the general. The negotiations with the EU stuttered.

The Prime Minister flopped at conference. Sufficient progress was not made. Ministers came and went with remarkable regularity. Both Houses of parliament threatened  – and in one case amended  – the Government’s Brexit related legislative programme.

Yet, here we are. With a political agreement on stage one. With the Prime Minister’s plan to take Britain out of both the Single Market and Customs Union intact. Indeed, it has been reinforced by the European Council’s acknowledgement of the fact in its guidelines (para 7) for the next phase of the talks.

Now don’t get me wrong. Clearly, much of what was said in that statement of Brexit principal all those months ago has been proven to be the nonsense. The idea that the period between March 2019 and the entry into force of a new deal with the EU would be one of ‘phased implementation’ appears even sillier now than it did then. The Government has self-evidently not kept its discipline.  Nor – still – are there any signs that ‘the country is coming together’.

My point is a broader one about the direction of travel regarding the eventual nature of Brexit. It was back in January when Theresa May, voice intact and background quite solid, laid out her approach amidst the splendour of Lancaster House. Looking back, it is revealing to note how well her substantive points have stood the test of time.

Britain still intends to leave both the single market and the customs Union. For all the sound and fury, for all the (remarkably consistent) forecasts from reputable economists as to what this might mean, this key plank of Government policy has been retained.

Continuity also means that the tensions and contradictions inherent in the government’s approach remain unresolved (and in some cases unaddressed). At Lancaster House, the Prime Minister declared it to be her intention to achieve ‘the freest possible trade in goods and services between Britain and the EU’s member states.’ She hinted strongly that the Government hoped to negotiate privileged ‘access’ to the single market rather than membership of it.

Informed observers at the time commented that the idea the EU would allow a little bit of single market membership for selected sectors was pie in the sky. And, only a week or so ago, Michel Barnier concurred: “We won’t mix up the various scenarios to create a specific one and accommodate their wishes, mixing, for instance, the advantages of the Norwegian model, member of the single market, with the simple requirements of the Canadian one. No way. They have to face the consequences of their own decision.”

So, the UK will either be in the single market – like Norway – or won’t– like Canada. The Prime Minister has ruled out the former. The latter rules out ‘the freest possible trade in goods and services’. When will the Government come clean?

As Britain heads towards Canada, the European Union is basing its planning on this scenario. And this in turns renders other contradictions that have long haunted the Government’s approach still more acute.

Most obviously, a solution to the issue of the Irish border appears as elusive as ever. There was no mention in the Lancaster House speech of this tangled question, apart from a stated desire to maintain the Common Travel Area. But Dublin have has ensured it is now front and centre.

Consequently, the joint report on phase one of the negotiations not only stipulated that there should be no ‘hard border’ (a phrase open to interpretation). It went still further, and in so doing created an enormous rod for the Government’s back. London has signed up to a commitment to the avoidance of ‘any physical infrastructure or related checks and controls’.

This, however, rubs up against something that was promised at Lancaster House – the ‘guiding principle’ that ‘no new barriers to living and doing business in our own Union are created.’ If the UK leaves the single market and customs union there has to be a border somewhere. Either in Ireland itself (excluded by the joint report). Or in the Irish Sea (excluded by Lancaster House).

An so, as the ship of state maintains its course, the Captain has still signally failed to achieve her first objective from that landmark speech – certainty. Almost one year on, profound uncertainty persists. How will the various Brexit circles be squared? Who will the Prime Minister choose to betray? The Republic of Ireland? The DUP? Half her own Cabinet?

I argued in my review of 2016 that 2017 would be the year when talk of Brexit process would be replaced by debates over Brexit substance. How wrong I was. As another new year dawns, the process still dominates and the choices are still to be made. It’s been a hell of a year. But the next one promises to be more febrile still.

By Professor Anand Menon, Director of The UK in a Changing Europe.