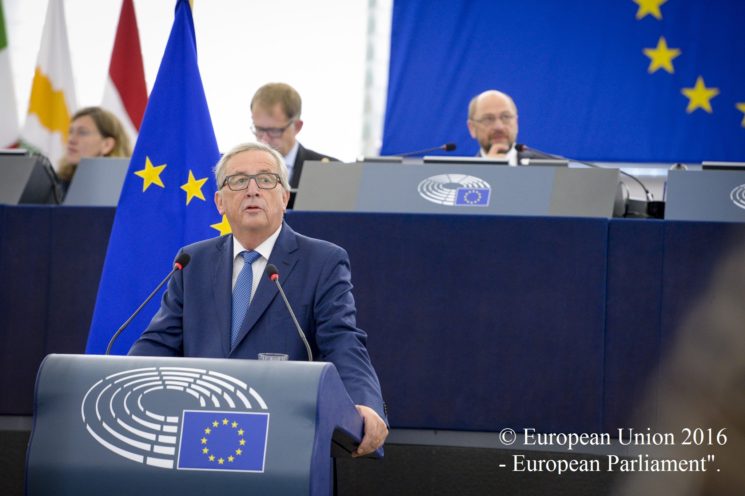 So President Juncker has spoken. And, happily not for as long as we might have feared. Dire warnings, before he stood, of a 90 minute peroration were hardly reassuring. When he stopped short of an hour, therefore, it was hard not to feel profoundly grateful.

And as such speeches go, it was perfectly fine. Though that, of course, is partly because the bar is set pretty low. And necessarily so. To put it mildly, this is an incredibly difficult speech to deliver, not least, as the title chosen for it leads to inevitable comparisons with its namesake in the United States.

Two glaring differences spring to mind. First, power. This speech was delivered by a President lacking the power to deliver what he seeks.

Second, there is language. As President Juncker spoke in German, it felt like an endless wait for a verb. Even when he switched to English it was hard to feel moved by words delivered in what was obviously not a native tongue.

Turning to substance, the speech struck me as sensible, restrained, and sensitive to the problems confronting today’s EU. There was a lack of ambitious pledges – indeed a lot it dealt with past achievements rather than future priorities. And there was a nod towards the politics of the member states – notably France with Juncker voicing support for a revision of the hated posted workers directive, which allows workers from another member state to be employed at conditions inferior to those enjoyed by domestic workers.

Last but not least, there was relatively little about Brexit. Some old tropes were rehashed: we regret but respect the decision; we’d like you to launch the process of leaving as soon as possible; and, crucially, single market membership means accepting the four freedoms.

Yet we also got an insight into what the EU hopes to do when it loses its noisy northern neighbor. Crucial to this agenda is defence. Juncker made clear his desire to see the Union get its own Operational HQ – something that may well happen once the British veto is no more. In addition, he laid out plans for the creation of a European defence fund by the end of the year to stimulate research and innovation. Coming hard on the heels of the Franco-German defence proposals, it seems clear this is an area the EU might try to progress in the months ahead.

Equally interesting are the ways in which issues on the EU agenda will impact on the nature of Brexit and vice versa. If the EU is serious about bringing in automated borders and identifying travelers planning to enter its territory, this will have profound implications for Brits visiting member states once Brexit has occurred. The idea of a European ESTA-(US visa application) most probably implies the need for us to fill in forms prior to travel.

Equally too, there are certain EU initiatives that Juncker alluded to that will be far less effective without the UK. The digital single market will not be as successful without the member state most addicted to online retail. Perhaps more significantly, a capital markets union will have significantly less impact without London playing a full role. And of course it remains to be seen whether, for all their planned institutional innovations, the 27 manage to create an effective defence capability without arguably their most powerful military partner.

Interdependence, then, means that Brexit will have impacts on both sides of the channel. Juncker hinted at, even if he did not directly address, many of these. Watching the speech, would a Brit have felt regret at what it is leaving behind? Absolutely not. But then again, the real impact of European integration has always resided in what the EU does, not what its leaders say. Indeed, a failure to distinguish between the two is one of the reasons why the UK voted to leave in the first place.

By professor Anand Menon, director of The UK in a Changing Europe.