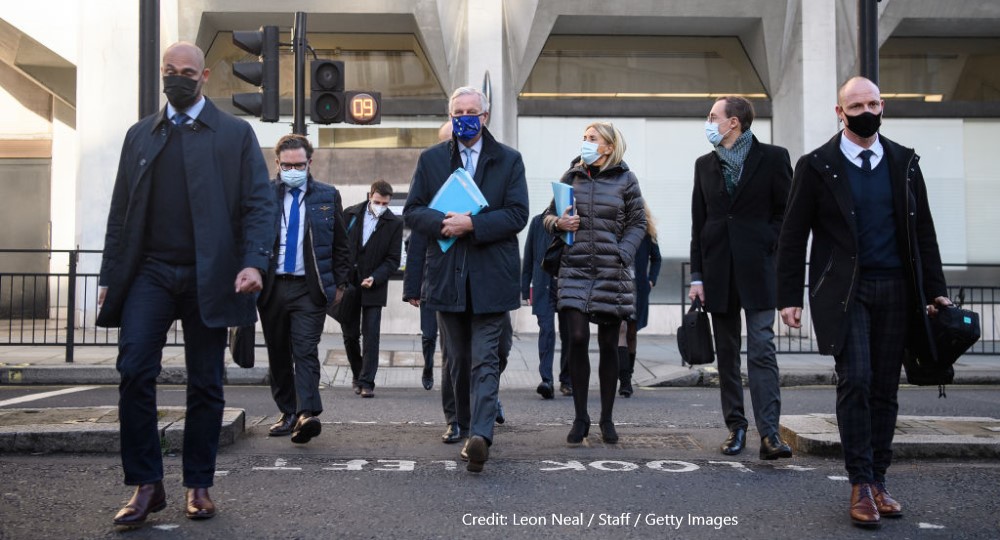 “We want a comprehensive free trade agreement, similar to Canada’s”, the Prime Minister said at the beginning of the negotiations on the future trade deal between the UK and the EU. Well, it turns out that a Canada-style relationship is indeed what’s on offer – but something that looks much more like Canada’s relationship with the US.

And it is the UK’s failure to understand that this was always the likely outcome of the negotiations that explains not just some of the frankly hysterical rhetoric now flying around but the current political impasse.

The claim is that the EU’s proposals – unlike those in the EU-Canada trade deal – would infringe the UK’s ‘sovereignty’ because, under some circumstances, if the UK chose to change its domestic regulations, or perhaps refused to align with the EU’s own changing regulations, the EU would be entitled to impose tariffs on UK goods.

This is a novel and frankly incoherent definition of sovereignty. As Ursula von der Leyen said, the UK would “remain free – sovereign if you wish – to decide what they want to do.” Equally, the EU would retain the (sovereign!) right to raise tariffs.

The argument, then, isn’t really about sovereignty at all. It’s about whether it’s somehow unfair that the EU wants the UK to sign up to a deal where the UK might face the uncomfortable choice of conforming to rules made in the EU or losing tariff-free access to the EU market.

And the short answer is that it is unfair. Because the fact is that although these provisions will no doubt, as Mrs von der Leyen also said, be reciprocal – we’d have the same formal, legal rights to raise tariffs on EU goods – we almost certainly wouldn’t use them.

But international trade negotiations aren’t about fairness. And this is where Canada comes in. There is a bizarre illusion that somehow the EU is unique in using its greater economic muscle to impose conditions on trade deals.

A representative illustration came from Tom Harwood, who noted, “Canada is close to America. No one expects that those independent countries be forced to ‘dynamically align’ with rules set by their neighbour. The EU’s stance is so plainly hostile.”

So what does Canada’s deal with the US look like? Does the US expect Canada or Mexico to ‘dynamically align’ with its rules?

Well, Donald Trump was elected on a promise to renegotiate or cancel the North American Free Trade Agreement (much, indeed, as Bill Clinton was in 1992) and he did just that. Faced with the threat of losing tariff-free access to their largest market, Mexico and Canada made a number of concessions.

For example, Mexico agreed to major reforms of its labour laws, including external monitoring and enforcement, and a minimum wage of $16 per hour for car workers – not something that even as an EU member state the UK would have been obliged to accept.

And as for sovereignty, the new US-Mexico-Canada Agreement actually gives the US an effective veto over any possible future Canadian or Mexican free trade deal with China.

Nor, it should be noted, is there anything uniquely Trumpian about this approach. The changes had bipartisan support, and there’s no prospect of the Biden administration taking a very different line.

The USMCA comes up for review in six years – not a long time in trade policy – and it is a racing certainty that new US demands will be on the table, whoever is in office.

And why do Canada and Mexico accept being treated like this? The answer is obvious. Canadian exports to the US make up a fifth of its output. By contrast, US exports to Canada make up only about 1.5% of GDP.

The outcome is simply the natural and predictable result of the different economic weight, and hence asymmetric negotiation leverage, of the two sides.

So the idea that somehow the EU is behaving in a uniquely heavy-handed way – still less that it is engaged in an unprecedented effort to interfere in the UK’s internal affairs – is nonsense.

The EU’s demands may be unfair. They may be uncomfortable. They may even be unacceptable. But nobody should be remotely surprised.

And – deal or no deal – we should be under no illusions that this will change. We’re not quite as dependent on the EU as Canada is on the US, with exports to the EU accounting for ‘only’ about 13% of our GDP.

More broadly, the UK has somewhat more leverage with respect to the EU than the US does with Canada. Our trade is genuinely more globally oriented. But the asymmetry remains huge and will do so for the foreseeable future.

So we will – either now, or sometime in future – get a Canada-style deal with the EU. That is to say, our trading relationship with the EU will look similar to that of Canada’s with the US.

It will be complicated, uncomfortable and subject to the vagaries of political developments on both sides of the Channel. But because it will remain economically vital to the UK, yet a ‘nice to have’ for the EU, it will also be asymmetric and unfair.

We will, under any normal or rational definition of the word, be sovereign. But it may not always feel that way.

By Jonathan Portes, senior fellow at UK in a Changing Europe and professor of economics and public policy at King’s College London.