A customs cock up 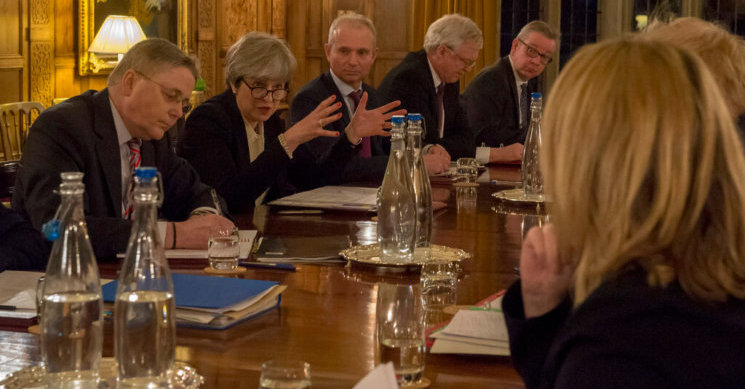 From the ridiculous to the absurd. Whatever side of the Brexit debate you’re on, presumably we can agree the UK’s exit from the EU is a big deal and should be taken seriously? In which case, the current debate about customs arrangements is simply not fit for purpose.

Neither of the alternatives that were discussed in the Brexit cabinet committee last Wednesday is practical.

Take the “customs partnership” that the Prime Minister proposed in her Mansion House speech. This would involve the UK acting on the EU’s behalf when handling goods from the rest of the world. Essentially, the UK would apply EU duties at its borders on those goods destined for the 27, while applying its own rates for products intended to remain within the UK.

Quite apart from the fact that both Brexit minister David Davis and the EU’s lead negotiator Michel Barnier have both rejected this option, it would be nothing short of a bureaucratic nightmare.

More specifically, it would create endless opportunities to undermine the tariff systems of both the UK and the EU. There would be little to stop importers who wanted to avoid high tariffs on either side from sending them to the other first and passing them back over the border. The only way to prevent this would be to track the movement of every good imported into the UK, which at last count amounted to some 280 million tonnes.

The EU, understandably, would never sign up to an arrangement that so thoroughly undermined its tariff system. Apart from which, it would impose significant costs on its own member states. Some 40 million tonnes of the UK’s trade passes through Rotterdam each year.

Does our government seriously think Brussels (let alone the Hague) would welcome the administrative and fiscal costs of dealing with our customs arrangements being dumped onto the Dutch?

If the facts were not clear enough, consider the politics. Any initiative that manages to unite Jacob Rees-Mogg and Michel Barnier in opposition must, we’d suggest, have something wrong with it.

Mr Rees-Mogg is quite right to argue that if the EU is to rely on the UK for managing some of its imports, the two will have to be fully aligned on product regulation. This makes the customs partnership incompatible with the long-held government ambition of leaving the single market.

The second option, maximum facilitation, or “max fac” in Whitehall speak, is equally, if not more, unworkable. At its most basic, it involves the use of technology – “global best practice”, to use the jargon – to ease the movement of goods across borders through things like pre-approval and trusted trader schemes.

But, very simply, this would require some infrastructure on the Irish border—something the government has ruled out in the draft Withdrawal Agreement and which the EU is insisting on. Any proposal that breaks this principle would probably mean the negotiations fail.

And let us be clear. Brexiters referencing Norway-Sweden or Canada-US or Switzerland-EU as examples of “frictionless crossings” are simply wrong. The simple fact is that much of the technology needed to make this kind of system work has simply not been developed yet.

As significant as EU disquiet about the proposals is the fact that the government itself does not know what it wants.  Cabinet Brexiters believe in max fac. They also oppose the customs partnership, increasingly seeing it as a back door way of remaining within a customs union. Meanwhile, many of their Cabinet colleagues see things very differently.

Nor is the EU blind to the fact that what the Prime Minister says may not be what she ends up presenting in Brussels. The Cabinet is divided. And no one can say with any certainty how parliament will vote when it comes to the crucial votes on amendments to the trade bill insisting on the negotiating of a customs union.

But all this is academic (in the pejorative sense of the term) anyway. Cabinet ministers have reportedly been told that neither option will be ready by the time the transition period ends in December 2020.

So, quite apart from deciding which of the two unworkable solutions the government wants to waste its time pursuing, it would also need to figure out a way to extend the transition period to avoid a customs cliff-edge.

Finally, and perhaps the ultimate irony, the kinds of arrangement being mooted by the Government, regardless of their technical, temporal or political practicality, depend on a significant amount of trust between the parties.

This, to say the least, is in short supply. It undermines the UK’s credibility to continue promoting obviously unworkable solutions and damages good will in the negotiations. The government’s continued insistence that a trade deal will be completed by October—an absolute impossibility—is another instance of it insulting the intelligence of anyone taking the negotiations seriously.

The Irish government in particular is not going to take a punt on the UK figuring out the details later. “Don’t worry, we’ll use technology” is not something any trade partner might be expected to take at face value.

And the EU is even less likely to do so as the British Government is currently up in front of the European Court of Justice charged with failing to crack down on customs fraud by Chinese clothing importers.

The Commission statement that preceded the launch of formal proceedings was hardly a vote of confidence in Britain’s willingness or ability to keep its side of even the exiting customs union arrangement: “Despite having been informed of the risks of fraud … and despite having been asked to take appropriate risk control measures, the United Kingdom failed to take action to prevent the fraud”.

Almost two years after the referendum, we do not know what we want, the ideas we have suggested are unacceptable not only to the EU but to half the Cabinet and a large number of MPs, and we still are not even talking about potential outcomes that are practically possible. This is a farce, but could easily turn into a tragedy.

By Professor Anand Menon, Director and Matt Bevington, researcher at The UK in a Changing Europe. This article originally featured in the Independent.