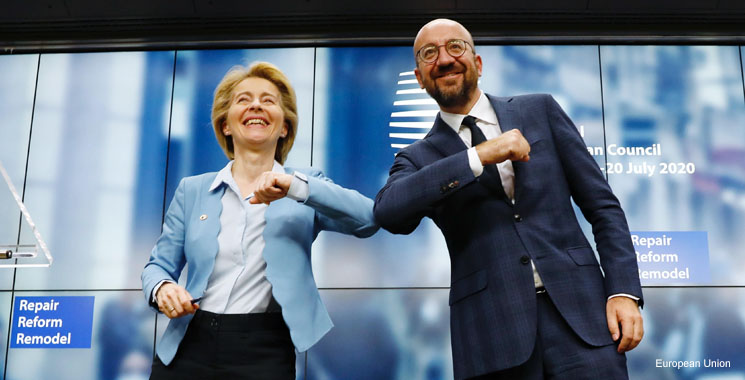 In the end they did it. After a marathon meeting, stretching from Friday 17 July until the wee small hours of Tuesday 21 July, the European Council at last reached agreement on the next multi-annual financial framework (MFF) for the EU budget and on the Next Generation EU package of measures to support economic recovery (NGEU).

The two key decisions were to settle on a headline total for the MFF of €1,074.3 billon, barely different from what had been rejected in February 2020, and a recovery fund of €750 billion. This is the figure originally proposed by the Commission, but with a split of €390 billion for grants and €360 billion for loans, instead of the initial 500/250.

Awkward disputes arose over such diverse matters as which spending programmes to cut, rebates, ‘rule of law’ criteria for allocating money, and whether to impose conditions on the receipt of grants. As always, national pride and hard-headed calculations of net positions were at the heart of the battle, though concerns about solidarity and the European ‘project’ were just occasionally in evidence.

The only remaining question, apparently leading to a fresh dispute between the Dutch and Italian Prime Ministers according to the excellent running commentary on the Politico website, is whether or not it is the longest ever EUCO meeting. It turns on when, precisely, the meeting started: on one reading, at 91 hours and 45 minutes, it matched the Nice EUCO twenty years ago; on another, it fell 25 minutes short of the record.

As always in such negotiations, all sides have reservations about the outcome, although one certainty is that when the heads of state and government resurface in their national capitals, they will be quick to claim the deal as a vindication of their tough stance and negotiating prowess. Dutch Prime Minister Mark Rutte may well revel in, rather than deplore, being called the new David Cameron in a jibe from Emmanuel Macron.

In the immediate aftermath of such fractious negotiations, it can be hard to work out who won and lost. Certainly, the frugal four plus one (Austria, Denmark, the Netherlands and Sweden, with Finland supporting them) fought hard to water down the recovery plan and succeeded in improving their net positions. Rebates, much to Macron’s dismay, have survived.

The southern countries can look forward to a sizeable boost to their economies as they try to emerge from the economic downturn. Their spending plans will face more scrutiny than they would have liked, but less than the hard-liners wanted. Similarly, Hungary and Poland will be quietly content about having seen off the more extreme demands for ‘rule of law’ conditionality on their receipts from the EU budget.

Germany, especially, and France had to make significant concessions, and some will wonder whether the outcome represents a decisive repudiation of Franco-German leadership. Yet it is important to highlight one facet of the agreement which could mark a sea-change in EU governance. By allowing the EU level to borrow directly from the markets to finance the NGEU recovery plan, a Rubicon has been crossed.

The ‘frugals’ may have succeeded in scaling down the additional grants under the EU budget, but it could prove to be a pyrrhic victory. With the principle of EU borrowing established, it will be hard to dis-establish, despite the careful wording in article A4 of the deal about it being ‘exceptional’ and ‘limited in size duration and scope’.

Some of the details of what had to be included to sweeten the deal verge on the comic. They range from envelopes of money for particular countries on the basis of imaginative, but dubious, criteria to well-tried tricks to ease the burden on certain member states.

Thus, paragraph 66 reveals that ‘to recognise the challenges posed by the situation of island Member States and the remoteness of certain parts of the European Union’, Cyprus and Malta will be allocated an additional €100 million each, as will Northern Finland. Ireland must be the wrong kind of island and northern Sweden must be chafing…

As an illustration of how little side-payments made a difference, a comparison of this paragraph in the final agreement with the previous version (tabled late on Monday 20 July by EUCO President Charles Michel after exhaustive consultation), is revealing. Estonia managed to secure €50 million, the Czechs gained €550 million and Slovenia €50 million more, while Germany grabbed an extra €150 million.

An especially convoluted formula is explained in paragraph 64: where the ‘population of a Member State has declined, on average, by more than 1% per year, between the periods 2007-2009 and 2016-2018, that Member State shall receive an additional allocation equivalent to the total fall in its population between those two periods multiplied by EUR 500’. Surely you understand this one, no?

On the revenue side, rebates will continue for Germany and the ‘frugals’, and the aim set out in the original Commission proposals on the budget of progressive reductions in these rebates has been abandoned. The Dutch will also regard the increased ‘collection’ fee – at a rate of 25% – for customs duties, known as ‘traditional own resources’, as a win for them.

Is it all done then? Not so fast: the European Parliament has to co-decide and several of its prominent members have been muttering on the side-lines about aspects of the deal they dislike. Some national parliaments may also be difficult. Politico reports that Greta Thunberg, Marine le Pen and Geert Wilders are all unhappy with it.

The President of the European Parliament (EP), David Sassoli said on twitter (shortly after the deal was announced) ‘we must now work to improve these instruments, we won’t give up on a more ambitious MFF’. He had earlier asserted that if the deal did not respect the EP’s priorities, ‘then the @Europarl_EN will not give its consent’.

In previous MFF cycles, the EP has huffed and puffed but, in the end, made little difference. This time cuts to the research and green transition budgets, the continuation of rebates, as well as the limited provision for establishing genuine new own resources are all provocations for the EP. But is the Parliament really prepared to prolong the agony and face the wrath of citizens?

Bismarck, no stranger to European deal making, is well known for the aphorism ‘laws are like sausages, it is better not to see them being made’. What would he have to say about EU finances?