A Scottish independence vote: a win-win for Johnson 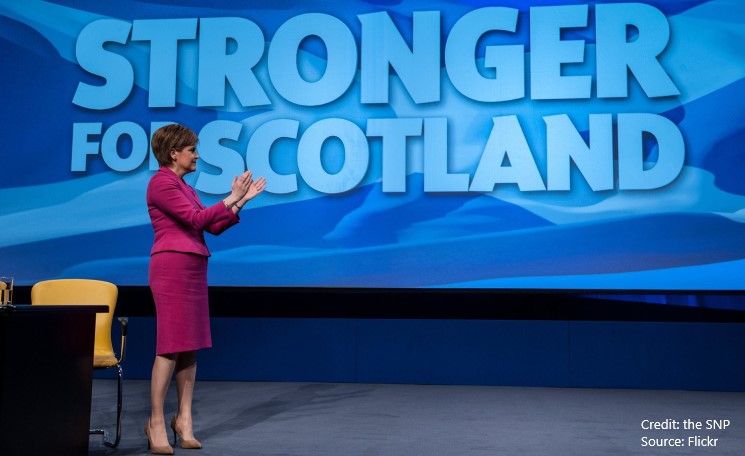 Of the many unions that Boris Johnson has been involved in, the union of England and Scotland is by far the oldest, but it is now the union most at risk of breaking up.

The Conservative Party won almost two-thirds of the seats in England but was reduced to barely one-tenth of those in Scotland.

The Scottish National Party won 48 of Scotland’s 59 seats at Westminster, and only 25% of Scottish voters backed the Conservatives.

However, this can only be done lawfully if the British government gives its approval to a vote on independence.

In a phone-call the day after the election, Johnson re-affirmed that he would refuse the First Minister’s demand for a ballot on Scottish independence. Sturgeon tartly replied that it was the right of the people of Scotland to determine their own future.

If Boris Johnson remains true to maintaining the Union, he will escalate a crisis of the future of the United Kingdom and boost the SNP’s chances of winning an absolute majority at the 2021 Scottish Parliament election.

But why should he want to jeopardize his reputation for flexibility when an independence referendum would offer him a win-win opportunity?

In a straight vote on Scottish independence, there is a fighting chance that the remain side would win.

In last week’s election, the pro-UK parties collectively won more than half the vote and Scottish opinion polls often show a majority for remaining in the United Kingdom, albeit the lead can be within the margin of sampling error.

Defeat would destroy the SNP’s claim to speak for the people of Scotland. By leading the campaign to remain in the UK, the Scottish Conservative & Unionist Party would have a chance of returning a majority of Scottish MPs to Westminster.

Since nothing is certain in elections nowadays, the Prime Minister would risk Scotland voting for independence. This would require the Scottish government to negotiate a withdrawal deal with Johnson’s government.

The Johnson government would hold the same dominant position vis-à-vis Scotland as the EU has done in negotiating the UK’s withdrawal from Europe.

At the top of the agenda would be the same issues that the British government has had to deal with in negotiating with Brussels: finance, citizenship and trade across a new English/Scottish border.

While the Treasury would want to share the British debt with Edinburgh, Scotland would want to claim reparations for use of the revenue from Scotland’s oil to keep Britain’s debt down in the decades when oil gushed money into the British Treasury.

Citizenship would be no problem. Unlike the Republic of Ireland, the SNP makes residence in Scotland the definition of who is a Scot for such political rights as voting and paying taxes.

The withdrawal of Ireland from the UK has made British citizenship a silly putty concept that can be shaped as convenient to circumstances.

Since Scotland will cease to be part of the European Union after the UK withdraws on 31 January, trade between two independent nations would be a matter of negotiation between London and Edinburgh.

Since Brussels would not be immediately involved and there is no economic or political incentive for either government to create trade or financial barriers between the two nations.

However, a post-Brexit Scottish application to join the European Union faces a big problem.

For consistency with the EU’s requirement of a border in the Irish Sea to protect its member states from trade competition from a non-member state, it should make a land border between Scotland and England a condition of Scotland becoming an EU member state.

Whatever arrangement is agreed about trade between England and the Republic of Ireland is the best that the SNP may hope for.

The big political winner from the break-up of the United Kingdom would be Boris Johnson. The removal of Scotland from the Westminster Parliament would increase the government’s overall majority from 80 to 127.

If a referendum in Northern Ireland led it to re-unite with the Republic, the Conservative majority at Westminster would rise to 145 and make it all the harder to dislodge him from Downing Street in 2024.

After presiding over a referendum leading to the break-up of the United Kingdom, the Conservative Party would need to keep its majority in England. In last week’s election the Conservatives won 345 English seats, almost double Labour’s share.

If Johnson has trouble satisfying his constituencies in the north of England when the realities of Brexit become evident he can compensate by satisfying the SNP’s demand for an independence referendum.

By Richard Rose, professor of politics at the University of Strathclyde Glasgow and a fellow of the Robert Schuman Centre at the European University Institute Florence.