A Scottish standard: the focus and language of the SNP manifesto 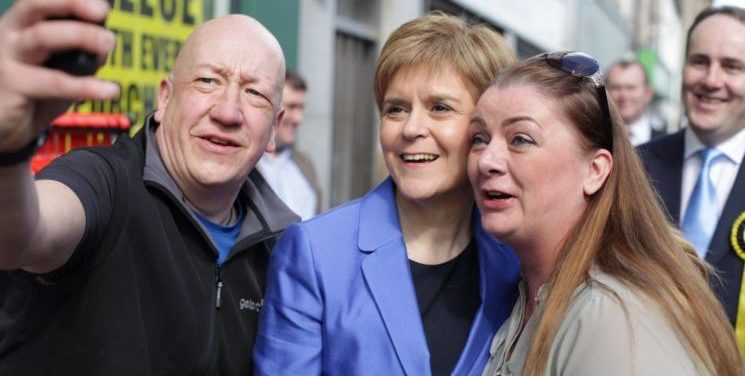 The SNP manifesto was launched on 27 November with the title ‘Stronger for Scotland’.

Overall, it holds few surprises and follows a tested pattern for the SNP both in terms of language, focus and aims.

It has many statements and claims but three messages are clearly established: the SNP manifesto is anti-Brexit/pro EU, pro-independence, and anti-Westminster

One aspect of it may well not appeal to all SNP supporters and potential voters, and that is the unequivocal support of the SNP for remaining in the EU.

However, it is clearly a risk, and a small risk at that, which Nicola Sturgeon, First Minister of Scotland and SNP party leader, is willing to take.

The risk is because of the generally- accepted argument that roughly one-third of those Scots who voted Leave in 2016 were SNP supporters.

But the risk is small because while the SNP may have a clear message on Brexit – which is that a ‘vote for the SNP is a vote to escape Brexit’ – they have plenty of other objectives and ideas.

These other ideas will clearly appeal to supporters of Scottish independence and even those who may not wish for independence but will nonetheless vote for the SNP.

Prime among those non-Brexit ideas is, unsurprisingly, independence for Scotland, framed as ‘the democratic right of the people in Scotland to decide their own future’.

Other key policy pledges include more money for the NHS; an end to austerity and an increase in public service investment; changes to the pension system, especially to support ‘WASPI women’ (Women Against State Pension Inequality) and also to preserve the triple lock; devolution of powers to Holyrood in other areas such employment law and migration; and at the end of the list a favourite goal of SNP activists and leadership alike, the scrapping of Trident.

It is this last point that is perhaps often missed in discussion, but it could be one of key importance if the election does indeed return a hung Parliament without a clear winner.

In such a scenario, the SNP may well be kingmaker, and kingmaker for Labour or a Labour-led coalition.

It is highly unlikely that the Conservatives could count on SNP support if they sought to establish a minority government.

Yet, Nicola Sturgeon emphasised during her manifesto launch speech that scrapping Trident would be a red line issue for her party.

While Jeremy Corbyn is most assuredly not a fan of Trident, Labour support for the nuclear deterrent remains official party policy.

The last thing Labour needs is another leader-party cleavage. That the SNP are not seeking to do any favours for the two main UK parties should not come as a surprise.

Even while the SNP may be more disposed towards supporting a minority Labour government than a Conservative one, the language of the SNP manifesto makes it plain that the party is not a fan of Westminster.

Whether it be on membership of the EU, immigration control, or taxation and social security, the SNP manifesto has plans for how to make policy work better for Scotland as a part of the UK, but it also makes plain the argument that the best outcome and answer is for these powers to exist in an independent Scotland.

There’s a clear rhetorical drive for a Scotland not subject to Westminster control, and the manifesto states that an ‘SNP election victory will be a clear instruction by the people of Scotland that a new referendum should be held next year’.

Attacking Westminster is a core thread of the SNP manifesto, and again, this is not surprising, as it is a long-established behaviour of the SNP in general.

The manifesto also makes key statements about Scotland’s economic strengths, positively linking these to the benefits of membership of the EU, and of an SNP run Scottish government.

So, in this age of political spin and post truth, how well do the SNP manifesto claims hold up to scrutiny?

When independently fact checked, the document is fairly robust in the veracity of its various claims.

There are a few arguable points, and one slight , which the SNP has amended for the online version, and stated was an error in the original printed version, but the bottom line is that the document makes few outlandish claims – and unlike other 2019 manifestos it does make clear statements about both policy and objectives.

While the SNP manifesto does mainly address reserved issues (those which remain under the control of the UK government), there are of course, crossover issues, which is bound to happen.

While health may be a devolved matter, the call for increased spending on health at Westminster would mean more money for Scotland too.

Also, the SNP have clearly stated they would support an NHS Protection Act, which would establish and protect the NHS as a publicly owned and operated service.

So, while the SNP manifesto is mainly about the positives of independence and the negatives of Brexit and Westminster, that tested pattern of greater devolution and greater investment is also evident.

What we can be sure of is that we will see these messages again in 2021, at the next election to the Scottish parliament.

By Dr Murray Stewart Leith, Reader in Politics at the University of the West of Scotland.  His co-authored text ‘Scotland: The new state of an old nation’ will be published by Manchester University Press in April 2020.