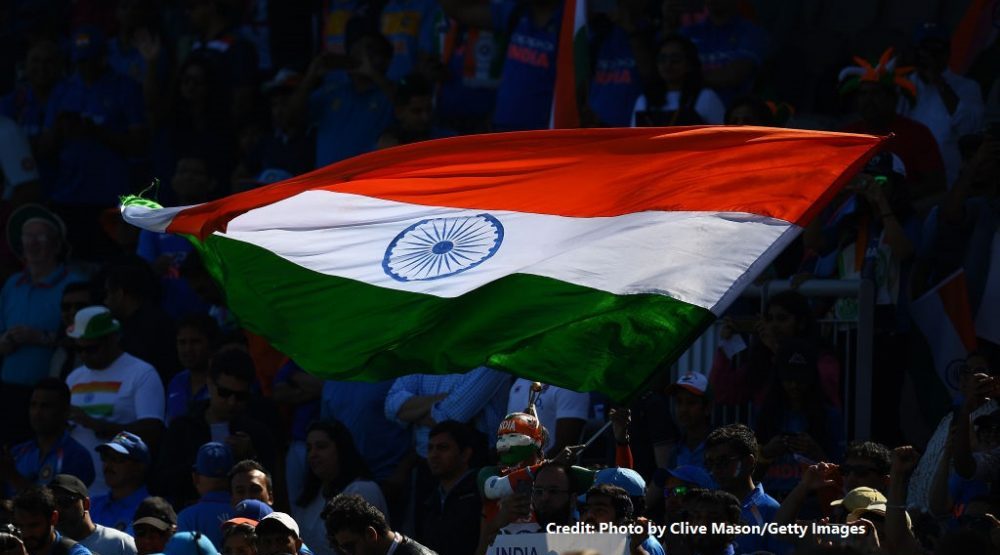 On 4 May, India and the UK announced a new trade agreement worth £1 bn. The agreement focuses mainly on Indian investments into the UK, the flagship announcement being the Serum Institute’s £240 million investment to augment its presence in the UK including a new sales office.

Other investments cover multiple sectors including infotech. Between them, these are expected to create jobs in the UK — at least 6,500 — besides facilitating UK exports into India including medical products, chemicals and technology.

£1 billion is not insignificant in absolute terms, but it is rather modest as a proportion of either country’s trade.

This echoes the wider backdrop: despite strong historical and present-day links, India’s share in the UK’s trade remains very modest.

The UK’s share in India’s trade is relatively larger, but it is still less than half that of China’s (see graph). 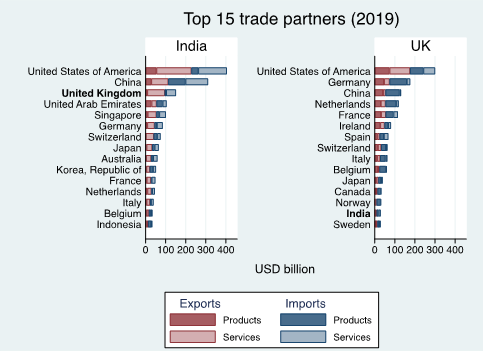 Source: Data on India’s services exports and imports are estimates from the WTO Balanced International Trade in Services (EBOPS); all other data from ITC Trade Map.

Both the UK and EU want to sign free trade agreements with India, but negotiations have been slow.

From India’s point of view one consistent sticking point has been hesitation to ease access for Indian workers to the UK and EU, though with Brexit there might be change on the horizon so far as the UK goes.

With the EU, part the reasons include India’s protectionism, for example in favour of the domestic automobile and alcohol industry.

Nonetheless, this deal and the resumption of EU-India trade talks are the result of strong pulls and pushes on both sides.

Pull factors include India’s trade attractiveness as a large market with significant potential given its large and growing consumer class.

Equally, exports are a priority for India. They have grown consistently from the 1990s onwards and are now worth about 18% of India’s GDP (2019), even though this proportion has decreased somewhat from a high of 25% in 2013.

Push factors include rising concerns about China on both sides. For the EU and UK these include trade dependence, IT security (read Huawei) and human rights violations in Xinjiang. India, too, is concerned about China.

Besides recent tensions along the border shared by the two countries, India has been consistently concerned about competition from Chinese firms.

In 2019 it abstained from the 16-country Regional Comprehensive Economic Partnership (RCEP), which would have otherwise strengthened access to east Asian, Australian and Chinese economies.

The timing of the agreement suggests a desire on both sides for continuity in efforts to negotiate closer relations amidst difficult circumstances brought on by Covid-19.

It’s announcement following a virtual meeting between Prime Ministers Modi and Johnson reflected the reality of the Covid-19 outbreak in India, which led to Boris Johnson cancelling first his visit in January as India’s Republic Day chief guest, and later a second attempt to visit in April.

Equally, the fact that the Serum Institute of India features prominently is no coincidence: the vaccine manufacturer has risen to unforeseen global prominence on the back of demand for the Oxford AstraZeneca vaccine, while maintaining pivotal position in the domestic vaccine supply chain.

The company’s owner has substantial personal investments in London, and India-made vaccines have supported the UK’s vaccination campaign.

From late-April onwards the still-unfolding Covid tragedy in India that has been allowed to take place has seen the UK ship oxygen-manufacturing equipment and other supplies to India after appeals on both sides, again evidencing strong diasporic and cultural links.

Unfortunately, the Covid-19 situation may yet have longer-run economic implications that are hard to predict.

Unlike the first Covid-19 wave, where they were relatively untouched, the second wave has hit India’ middle classes hard.

The same goes for small export-oriented manufacturing firms in India that have suffered both from the collapse in global demand as well as the loss of skilled labour as workers headed back to their villages.

Maintaining growth and a strong consumer class in the short run will depend on substantial, long-lasting and well-targeted government support across economic and social classes of a kind that so far seems unavailable.

Perhaps it therefore makes most sense to view this agreement not so much in terms of content, as much as a signal of the desire and willingness to continue engaging and negotiating.

A substantive trade deal must facilitate bi-directional investment in both countries, job creation on both sides, tariff reductions and market access as needed, and enhanced freedom of movement of the sort that India rightly demands but both countries would stand to benefit from.

On the latter, recent moves to lengthen the duration of post-study UK work visas to the benefit of Indian students, as well as UK universities, perhaps signals a slight thaw in the UK’s stance on migration.

At the same time, India’s protests at the prospect of debates on India’s farm laws in the UK Parliament suggests that strong cultural ties can sometimes have awkward consequences.

Yet the fundamental factors that draw the two economies together remain unchanged and are more permanent than the powers negotiating these deals.

Equally, India and the UK (and the EU) will all continue to watch China’s growth and dominance with a sense of caution.

While a free trade agreement of the kind both sides desire may yet be some distance away, it would seem likely that successive negotiations will continue to bring that ideal closer.