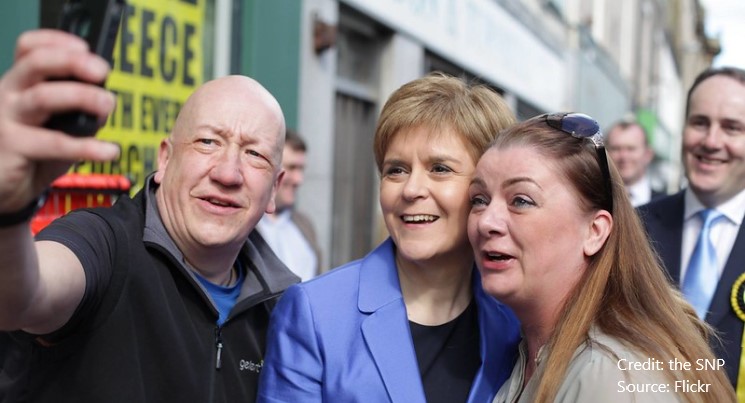 General elections north of the border have always had a distinctive flavour. But the dynamics in Scotland this time feel very different, in two ways.

First, it is perhaps the only part of the UK where Brexit may not be the defining issue of the campaign. At least as important is that other big constitutional divide that dominates Scottish politics: the debate between independence and union.

Second, there is no one who would bet against the Scottish National Party (SNP) emerging yet again as the dominant force. The only doubt is over the size of its winning margin.

In 2017, the SNP won 35 Scottish seats—more than the other parties put together. It was by some distance the SNP’s second best ever performance in a general election.

However, coming hot on the heels of a staggering performance in 2015, the loss of 21 seats was a profound disappointment, which led the First Minister, Nicola Sturgeon, to press pause on the independence process.

The finger on that pause button has now been well and truly lifted.

The SNP leader has put the demand for an independence referendum at the heart of the SNP’s election campaign. While that might mobilise the base, it’s a high-risk strategy.

Recent opinion polls suggest that support for independence—when posed as a binary yes/no question—is at an historically high 50%, around 10 percentage points higher than the SNP’s forecast vote share.

But this tells us little about whether support for independence runs deep enough to drive vote choice beyond the party’s base.

It also gifts the Scottish Conservative Party the campaign it craves: to lead the defence of the Union, a strategy that helped them win 13 seats in 2017 and a vote share not seen in a general election in Scotland since 1979.

Prioritising independence could also be a gift to the Liberal Democrats if it means allowing them to define themselves as the party most identified with opposition to Brexit.

Nonetheless, the SNP has high hopes of making gains in the election, and the pre-campaign opinion polls suggest it is on course to do so.

While not reaching the dizzy heights of 2015, a Panelbase/Sunday Times poll in early October (the most recent Scotland-only poll) suggested it is comfortably ahead of the other parties.

Its share of voting intentions was slightly higher than its vote share in 2017 but its lead over the others appeared markedly greater.

Support for the Scottish Conservatives was 8 percentage points down on its 2017 performance (it was even lower in polls earlier in the summer, when the Brexit Party’s intended vote share was higher).

The recent departure of the popular Ruth Davidson as the Scots Tory leader makes it all the harder to claw that support back.

By a similar margin, Scottish Labour’s vote share was also down on its 2017 performance. Its leader, Richard Leonard, has failed to make much of an impression on the Scottish electorate and the party has largely lost its distinctive Scottish identity.

Scottish voters will, of course, be exposed to the broader dynamics of the British campaign, but the two big British parties seem less focused on Scotland than in previous elections, perhaps reflecting low expectations of electoral rewards.

All that said, predicting election outcomes in Scotland is made especially difficult by the number of marginal constituencies. There are 31 seats across the UK with majorities under 1%—less than 5% of all seats.

However, 12 of these are in Scotland, some 20% of all Scottish seats, and eight of them are held by the SNP.

Four of these had majorities of less than 100, including North East Fife which had a majority of just two. That seat, held last time by the SNP’s Brexit spokesperson Stephen Gethins, will be a prime target for the Liberal Democrats.

Brexit will, of course, feature prominently in the campaign in Scotland, as it will elsewhere.

The Scottish result could have implications for Brexit prospects, especially if losses make it more difficult for the Conservatives to secure an overall majority or if the SNP holds the balance of power. Moreover, the centrality of the independence issue is inextricably linked to Brexit.

That the UK seems set to take Scotland out of the EU despite the clear and consistent majority support among Scots for Remain, provides the justification for demanding a new independence referendum so soon after the previous one.

It is notable that the modest increase in support for independence in recent months has been driven by those who voted Remain in the EU referendum.

Ahead of an independence rally in George Square on 2 November, Nicola Sturgeon declared, ‘This election is Scotland’s chance to escape Brexit and to put our future in our own hands.’

The increased salience of the independence issue is a reminder of the strains that leaving the European Union is putting on the future of the UK Union.