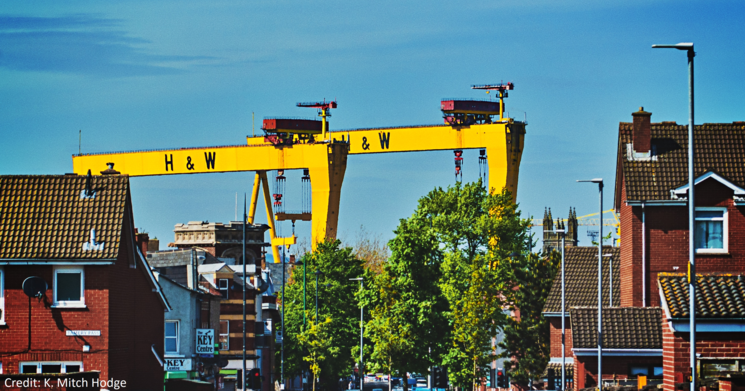 As the UK general election campaign gets into full swing, it would be easy to overlook over the next five weeks the implications for politics in Northern Ireland.

Historically, general elections in Northern Ireland have been dubbed ‘headcounts’ of voters from the unionist and nationalist communities. There may be seat changes between unionist parties, and between nationalist ones, but usually no more than two seats cross communities per election.

There may be a breakthrough for the Alliance Party

There’s reason to think this election may be different. The Alliance Party, which is neither unionist nor nationalist, has got the big M—momentum.

First, in early May the party won 12% of first-preference votes in local elections, a 5 percentage-point gain on the previous comparable result in 2014, gaining 21 councillors, a two-thirds increase in seats.

No other party gained more than 1 percentage point. Local elections in Northern Ireland, where turnout was 53%, are a better gauge of public sentiment than in England, for instance.

Alliance increased their share of first-preference votes to 18% in the European Parliament elections at the end of May. The party’s leader, Naomi Long, was duly elected—their first ever MEP—and by the time the count had concluded (in round five of the single transferable vote system) Alliance had won the most votes.

This all points to a historical high water mark for the party.

Now the bad news for Alliance.

The party’s successes have been achieved through the single transferable vote system, which allows voters to cast ballots for several candidates in order of preference.

Alliance doesn’t get the most first-preference votes, but its success is built on being the most transferred-to party. And their votes come from both communities.

The first-past-the-post system used in general elections significantly blunts this advantage. Rather than drawing soft support from all sides, it can mean the party gets squeezed.

In 2017, the party stood still in terms of vote share, coming fifth behind the four main unionist and nationalist parties. To break through, Alliance would have to become a firm first choice in the minds of many SDLP and UUP voters in seats like North Down and Belfast East.

A Lucid Talk MRP poll conducted in August suggests that this might well be on the cards. Alliance is on 20% of the vote, placing them in contention in at least four seats.

If this support transpired on election day, the party would become a direct competitor to both the DUP and Sinn Féin, and it would be a credible threat in six currently DUP-held seats. This would be an earthquake in Northern Irish politics.

However, we should maintain a healthy degree of scepticism.

In Belfast South, for instance, the particular dynamics of the seats are crucial. Sinn Féin have stood aside, despite a substantial vote share at the last election. This gives the SDLP’s Claire Hanna, a high-profile MLA, a strong chance of taking the seat ahead of Alliance, which is coming from third.

In South Antrim—the party’s second best chance according to the Lucid Talk poll from August—the party is coming from fourth, needing a near 16% swing from the DUP. To win, Alliance would have to swallow the vast majority of the UUP vote and hope the DUP fell back.

Belfast East is perhaps the party’s most plausible chance, having held it in 2010, but this still requires a 10% swing from the DUP.

Other seats could change hands

Regardless of Alliance’s performance this could be a remarkable election in Northern Ireland. Since the Good Friday Agreement, no more than two seats have crossed communities in any single election (either between unionists and nationalists, or between either and the Alliance or independents).

In addition to seats where Alliance may be competitive, Sinn Féin holds the hyper-marginal Fermanagh and South Tyrone, where the UUP are within a less than 1% swing. The DUP have stood aside here to aid the UUP’s chances. The SDLP are also close behind Sinn Féin in Foyle.

Changes in these seats could fragment the electoral landscape.

In an 18-seat election, even four seats changing hands would be substantial. This would amount to 22% of the total—the equivalent in Great Britain would be 139 seats (just 66 changed hands in 2017).

Although what happens in Northern Ireland will by no means be the main story of the election in the UK as a whole, small margins in the House of Commons may make every Northern Irish seat all the more important.

And none of this takes account of the fallout of the DUP throwing in their lot with Boris Johnson’s Conservatives, who then negotiated a deal with the EU that unionists find hard to stomach. If the UUP make inroads into their unionist rivals, this could open up the electoral landscape even more.

The result may mean both more Northern Irish MPs in the House of Commons and a more representative group. If either of the two vulnerable Sinn Féin seats are taken by the UUP or SDLP, Northern Ireland will have more than its current 11 MPs at Westminster.

It would also mean the end of the DUP’s near monopoly of Northern Irish representatives: only Lady Sylvia Hermon, an independent who is standing down at this election, represented a different position. That would mean that the next parliament would better reflect the diversity of views in Northern Ireland.

What might this mean for Brexit? Even a small number of pro-Remain MPs from Northern Ireland could bolster a Labour-led ‘Traffic Light’ coalition. As representatives of a part of the UK that voted decisively for Remain, they would be entirely comfortable supporting a second referendum position.

The DUP won’t formally support any government that proceeds with a Brexit deal along current lines. Nor could they support a Labour government led by Corbyn, who has a long association with the nationalist cause.

Another hung parliament in which they held the balance of power might once again give them an effective veto over both.