A view of “Global Britain” from East Asia 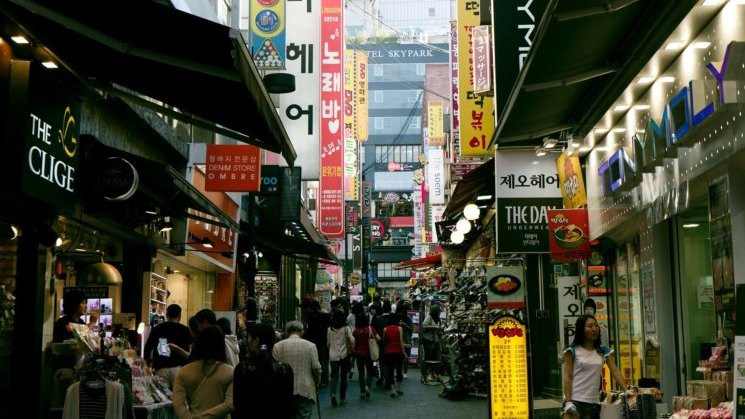 Theresa May has set out her vision of a “Global Britain” outside the EU, as “the strongest and most passionate advocate for free trade right across the globe”.  This vision assumes that the UK will be able to agree new trade deals with countries outside Europe, and that these deals would reap new economic benefits for the UK.  How realistic are these assumptions? 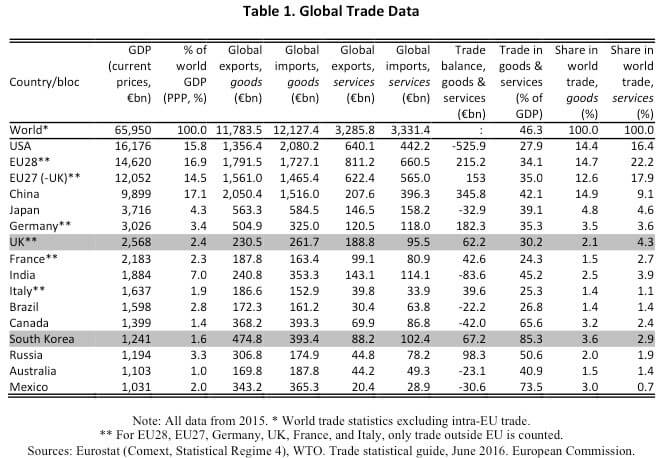 To shed more light on the UK’s prospects, let us consider the situation from the perspective of South Korea, which will be a similarly-sized trading power to the UK.

South Korea already has an FTA with the EU, which hence currently covers the UK.  The EU-South Korea FTA entered into force on 1 July 2011, and is the most ambitious of the 30 or so trade agreements the EU has signed so far, in that it covers a larger volume of bilateral trade than any other agreement between the EU and a third country.  It is also one of the most comprehensive trade agreements signed between any two partners anywhere in the world.

From the UK’s point of view, a comprehensive FTA with South Korea would be attractive.  As Table 2 shows, South Korea is the UK’s 11th largest trading partner (treating the EU27 as a single bloc). In fact, apart from Norway and Turkey, South Korea is the UK’s third largest trading partner outside the EU with which the UK currently has a trade status as a member of the EU.  The US, China, Hong Kong, Japan and India will be high on the UK’s priority list, but any negotiations with these states would need to start from scratch, whereas potential agreements with Switzerland, Canada and South Korea could start from the terms of the current EU agreements with these three countries.

Two other issues will also be significant in any new UK-South Korea agreement.  First, in terms of services trade, under the current EU-South Korea agreement, each party is required to extend to the other any market liberalisation that it may grant in any future FTA with a third country. So, South Korea cannot agree any further services market access to the UK without also extending it to the EU. And, if South Korea extends market access to the UK, the US may demand a similar level of access under its agreement with Korea.

Once the UK leaves the EU, any components from the EU will be considered to be from outside the UK.  Currently, the percentage of UK components in British-built cars is 41% on average, which is lower than a 55% local contents requirement if the terms of a UK-South Korea FTA replicate the EU-South Korea FTA.  This would mean that UK-built cars exported to Korea would suddenly be subject to an 8% tariff (the current WTO most-favoured-nation level).

In short, Global Britain does not look quite as attractive from Seoul as it might initially seem from London.  The UK outside the EU will be a ‘second tier’ player when it comes to negotiating free trade agreements, considerably weaker than the ‘big three’: the US, the EU, and China.  It will be easier for the UK to sign trade deals with the 53 countries with which the UK already has free trade agreements, via its current EU membership, and one of the countries high on this list will be South Korea, which has a comprehensive FTA with the EU.