A way through the Brexit impasse? a pilot Brexit peace poll

In my series of blogs on Brexit I have suggested that a peace poll is needed, that much of the polling done on Brexit has been partisan and misleading, and that given Brexit has created deep divisions in society pollsters should use conflict resolution best practice to analyse their data.

With this in mind, I have completed a pilot Brexit peace poll to show how this can be done. To be clear, too much weight should not be put on the specific findings of this pilot. It was conducted on 2-4 February via Google Surveys with a small sample size (N=100).

A larger survey is needed with input from the parliamentarians who wrote the amendments tested here. Nevertheless, it does demonstrate how peace polls can help to build consensus on deeply divisive issues.

Firstly, the questions in a peace poll should be agreed and drafted with the cooperation of the parties to the conflict. In this case that means MPs. For this pilot, I took the amendments from the House of Commons Order Paper for the votes on Theresa May’s statement last week as the options.

From a conflict resolution perspective, the amendments can be characterised as substantive elements of an agreement or procedural elements for reaching an agreement.

In the pilot, I tested nine solutions against each other for resolving the parliamentary impasse on Brexit, with a further question asking if respondents would vote ‘Leave’ or ‘Remain’ if a referendum were held today (see a sample in Table 1 below, the full results can be found here).

I was then able to compare the opinions of Leavers and Remainers and see if a compromise could be found that they might both be able to agree to. 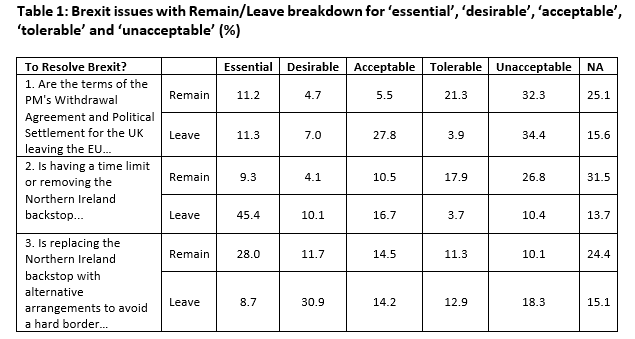 As an indication of the sample for this part of the pilot, the results of the referendum question were as follows: Remain 57.6%, Leave 31.7% and I prefer not to say 10.7%.

Leavers also do not want a referendum to leave or remain in the EU (82 per cent ‘unacceptable’). So there is little agreement on these. I also did the same process for nine procedural issues (the results can be found here).

However, if we look at what Remainers and Leavers each consider to be ‘essential’ (see partial results in Table 2 below), we get a slightly different picture. The top priority for Remainers is ‘a permanent customs union’ approach, with 48 per cent seeing this as ‘essential’.

The same item is third on the Leavers’ list and is considered ‘unacceptable’ by just 20 per cent, which may suggest some scope for compromise. 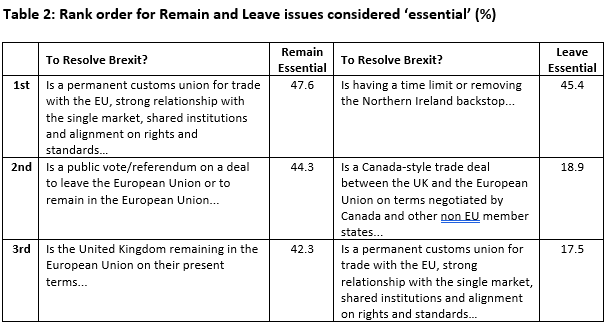 Other options include a Canada-style deal and a Norway-style deal, but these presently require a Northern Ireland backstop, which Leavers want removed. Interestingly, even 27 per cent of Remainers consider the backstop ‘unacceptable’.

On the other hand, the ‘permanent customs union’ approach partially obviates the need for a backstop, so this may be considered the lesser of the evils given its general ‘acceptance’ by Leavers, at 31 per cent.

With regard to the procedural issues (see partial results in Table 3 below), Remainers seem to be more keen on the options available.

Some 46 per cent see a public vote on any deal agreed to by MPs as essential, 43 per cent want MPs to vote on the various options (a so-called indicative vote) and ‘ruling out a no-deal scenario and preparing for a People’s Vote with an option to remain in the European Union’ is seen as essential by 42 per cent.

Interestingly, when phrased in this way, a majority of Leavers (56 per cent) considered this form of referendum to be ‘desirable’.

Not surprisingly, though, Leavers are far less enthusiastic about the various procedural options on offer.

By Dr Colin Irwin, research fellow at the University of Liverpool. This piece originally appeared on the Peace Polls blog.