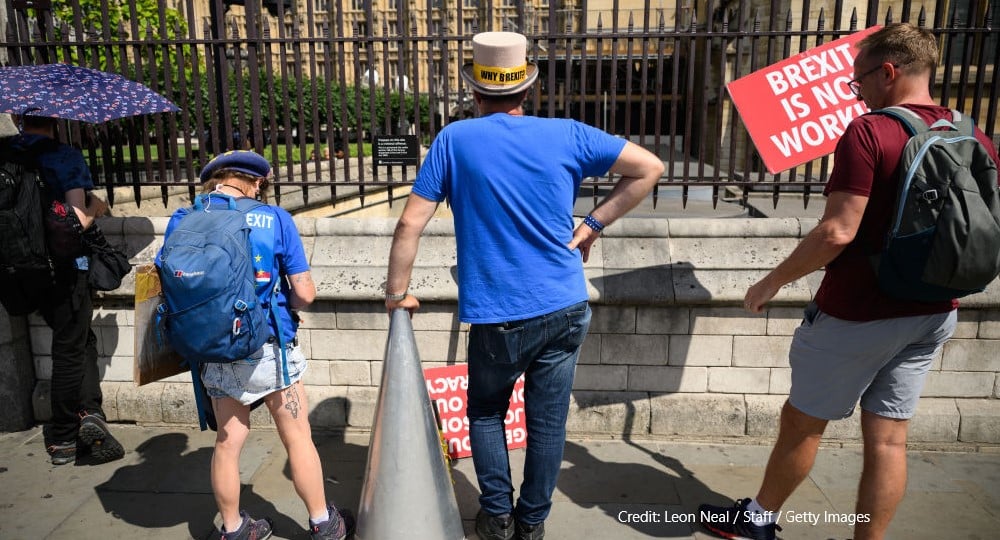 Sophie Stowers and Alan Wager look back on a year in Brexit, using the UK in a Changing Europe/Redfield and Wilton Strategies Brexit tracker poll to highlight five key trends in attitudes to Brexit in 2022.

From 2016 through to the 2019 general election, Brexit dominated British politics. Since then, myriad crises – some global, others created in Westminster – have driven political events. In 2022, the number of people saying that the UK’s relationship with the EU was one of the most important issues facing the country continued to fall: in fifth place in the public’s list of concerns in January, and out of the top 10 altogether by the end of the year.

That being said, recent evidence of a growing number saying that leaving the EU was the wrong decision has triggered some debates about where attitudes to Brexit are likely to go next.

Using our regular Brexit Tracker which measures public sentiment across all aspects of Brexit, here we highlight five key trends in attitudes to Brexit in 2022.

Throughout most of 2022, voters became increasingly likely to say that the UK’s economy is weaker outside of the EU than it would have otherwise been inside. Yet, in December, the public’s pessimism about the post-Brexit economy partly reversed. 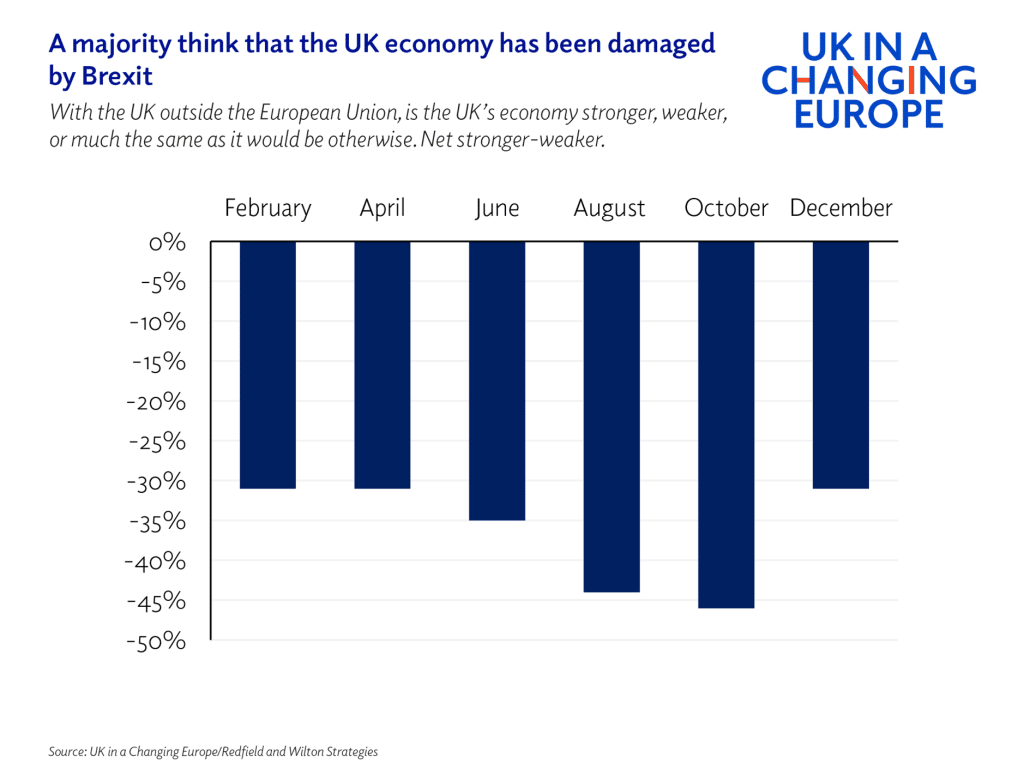 This is part of growing evidence that perceptions of Brexit rise and fall with the wider fate of the government. As James Kanagasooriam has illustrated, from 2016 through to 2020 views on the rights and wrongs of Brexit were largely independent from satisfaction with the government more generally. Now, views on Brexit are tied to the government’s fate. When Conservative fortunes (and economic stability) reached a nadir under Liz Truss, perceptions of Brexit’s economic impact suffered too. Sunak’s partial recovery has created less doom about Brexit’s impact on the economy.

This also means that Leave and Remain voters’ positions on the economic effects of Brexit now rise and fall at roughly the same rate: in October, this peaked at 35% of Leave voters saying that the UK economy is worse off than it would be otherwise with the UK outside the EU (down to 30% in December).

At the beginning of 2022, our respondents were much more likely to say that the UK should prioritise cooperation with the United States when it comes to relations with Russia. In the aftermath of the outbreak of war in Ukraine in late February, voters seemed to change their minds. In February, 30% of voters said that it was more important for Britain to align with the EU on Russia. By the end of the year, this had risen to 41%. 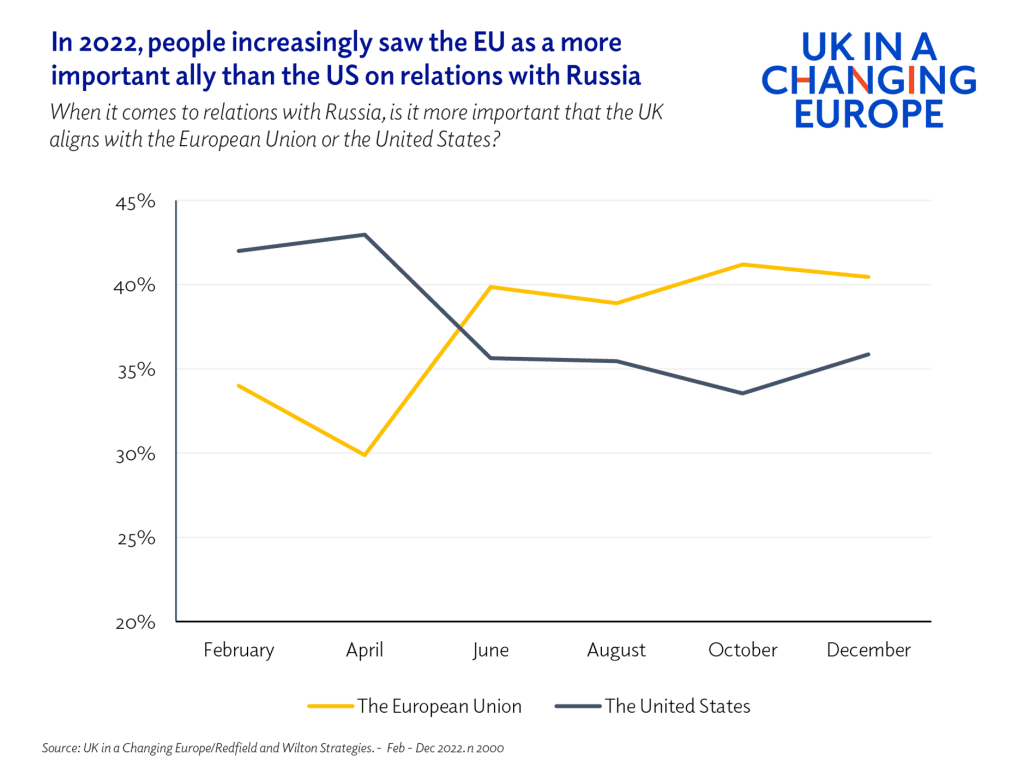 Interestingly, however, when asked if Brexit has strengthened or weakened the UK’s ability to respond to the situation in Ukraine, the public have tended towards saying that Brexit has led to a stronger response, or at least no weakening of the UK’s position: in our latest polling 31% say that the UK’s response to Ukraine’s invasion has been stronger, 34% say the response is similar – just 17 % say weaker, as a result of Brexit.

Voters remain highly uncertain about where the parties stand on Brexit

The public – and understandably so – do not have a very strong idea of where the parties stand on Brexit. Labour’s reluctance to say the B-word means that, by year end, 34% say that Labour would seek a closer relationship with the EU than the one we have at the moment. This is fewer than identified this as Labour’s policy at the start of the year. 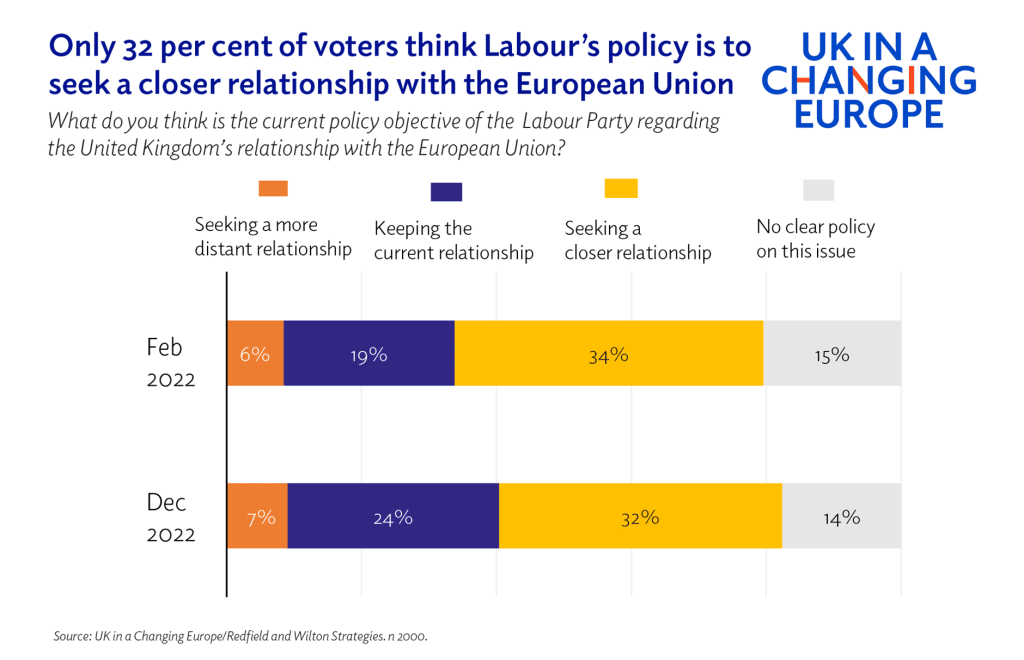 In the aftermath of its disastrous performance in the 2019 election, particularly in Leave-voting seats in the Midlands and North of England, Keir Starmer has been keen to get across to voters that Labour will ‘make Brexit work’ and is not seeking to re-join the European Union. There are some signs they may be having some success with that message. On top of questions about the party’s current position, we asked a different, binary question of whether respondents think Labour’s longer-term policy objective is to re-join or stay out. While 47% of Leave voters at the start of the year felt Keir Starmer’s long-term aim was to re-join, that had fallen to 40% by the end of the year.

The growing support for rejoin is coming mainly from younger voters

There is no short or medium-term prospect of revisiting the question of EU membership. However, as a route to understanding sentiment around Brexit, our tracker continues to ask respondents whether they would hypothetically support re-joining or staying out of the EU in a referendum. Our polling found that support for the idea of rejoining the EU has drifted up throughout 2022: from 49% in favour of rejoining in February, to 56% in December. 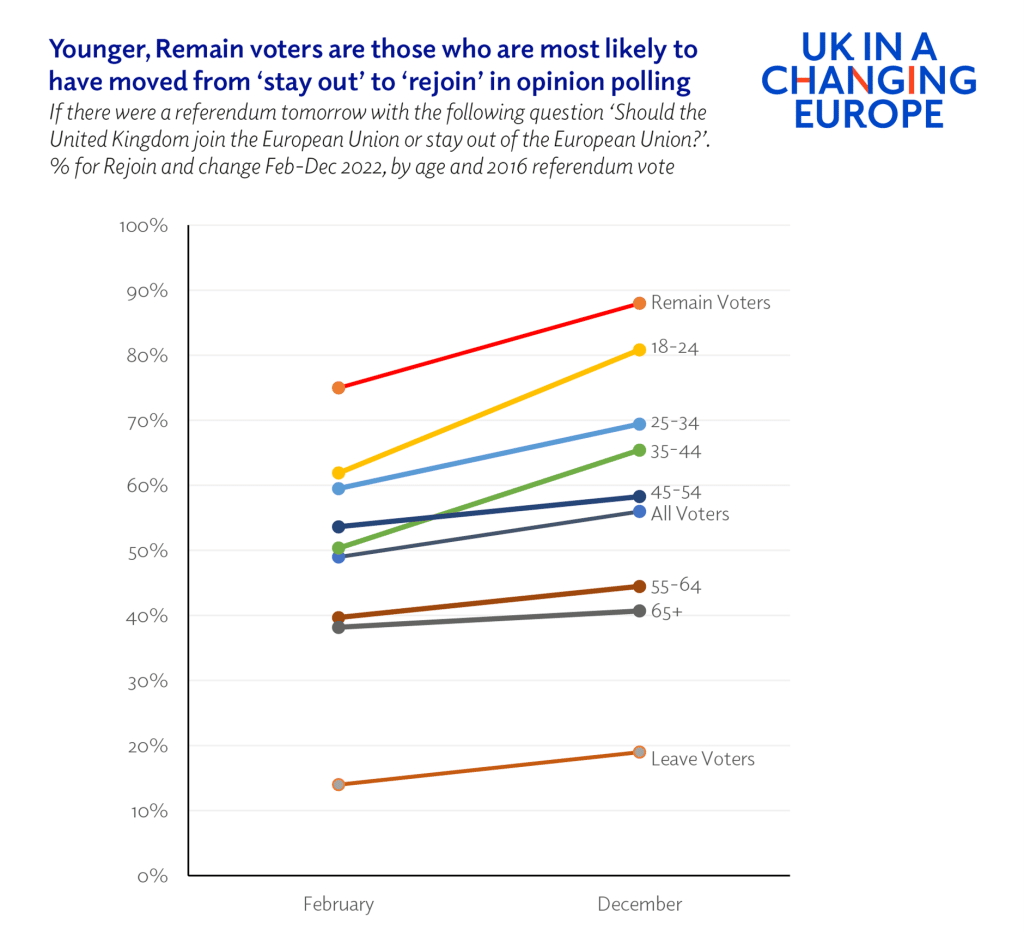 When we look under the bonnet at this data on rejoin, we find significant differences by age: support for rejoin has risen sharply among voters under 45, while older voters are much less likely to have changed their mind. Currently, just under one in five (19%) of 2016 Leave voters say they would hypothetically back the idea of ‘rejoin’; 12% of Remainers would opt to stay out. Those who did not vote would back rejoining by a ratio of 4:1. As Simon Hix and colleagues recently showed, a key part of this is younger voters replacing older voters within the electorate.

Finally, a steady trend throughout 2022 which accelerated between October and December has been a growing number of respondents (rising at an equally steady rate among those who voted Leave and Remain) who say that illegal immigration into the UK has risen since the UK’s departure from the EU. 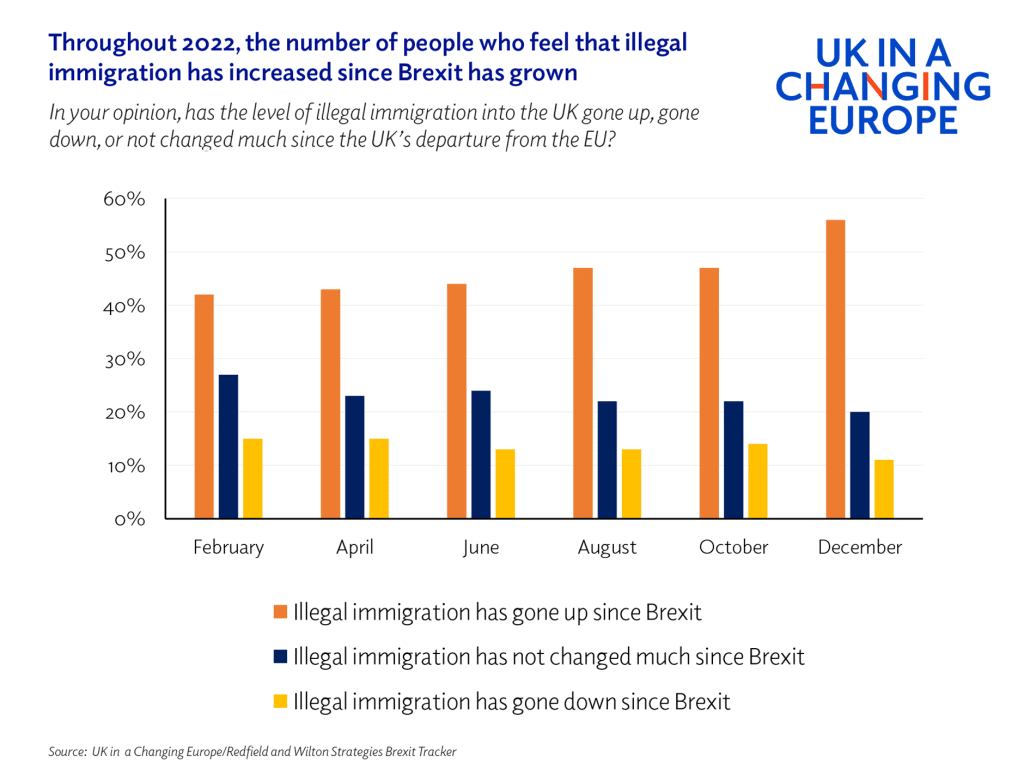