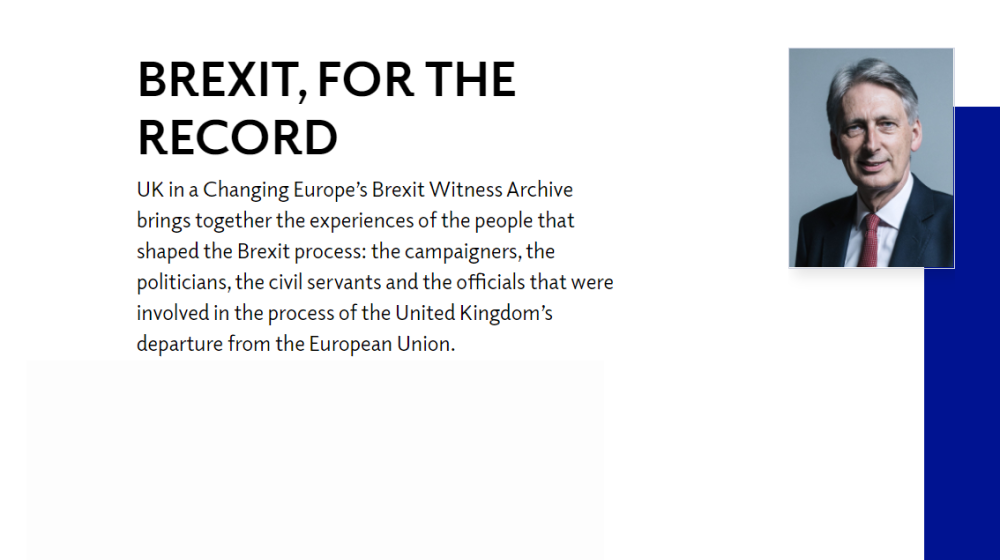 Another day, another Brexit anniversary. It’s a year since the UK left the European Union. A year since Nigel Farage addressed the crowds outside parliament, while a projection of Big Ben bonged 11 o’clock on the wall of No 10.

A year also, of course, since Public Health England discovered the first case of a mysterious virus in this country. Which goes some way to explaining both why that year feels like a lifetime and why we have spent so little time discussing Brexit.

The pandemic will clearly affect our ability to think clearly about the impact of Brexit. Partly, this is because distinguishing one set of economic impacts from another will prove incredibly difficult. Partly, too, the sheer scale of the short-term impact of

of Covid-19 overshadows the rather slow burn, although ultimately more damaging, impact of the end of the transition period.

This can, in the short term at least, only work in favour of the prime minister. For all the straightforwardly incorrect claims Boris Johnson has made, both about the Northern Ireland Protocol (no checks in the Irish Sea) and the Trade and Co-operation Agreement itself (no new non-tariff barriers), the Brexit deal he negotiated will have a huge impact on UK trade with the European Union.

Our own modelling suggests that the impacts on trade between the UK and the EU, and hence on the UK economy, will be significant.

In other words, for as long as attention is diverted away from Brexit and on to a pandemic that has been imposed upon us without choice, the government will be able to talk down any Brexit impact.

Of course, the converse is also true: once the public health crisis is over, and trade and travel return to something approaching pre-pandemic levels, the challenge facing the government in this regard will become greater.

And of course, at a certain point in time, the attention of journalists, commentators and academics will turn to figuring out how it was that we arrived at the situation we are now in. After all, the Brexit that Johnson has delivered is, by any measure, on the “hard” end of the spectrum.

How this happened is, as Jill Rutter and I have argued, something of a mystery. In 2016 most people assumed, and most MPs supported, a far softer variant involving far closer links and far less disruption to trade.

We have had attempts at an explanation already. Excellent books by Tim Shipman, Anthony Seldon, and Gabriel Pogrund and Patrick Maguire have told parts of the story. Necessarily, though, these accounts are somewhat partial and the sources they draw on tend to be anonymous.

Which is why, to try to set the record straight, and for the benefit of future generations of historians, social scientists and, yes, even journalists, we at the UK in a Changing Europe are launching our Brexit Witness Archive today.

This features a number of interviews, which we will keep adding to, initially every week, with key participants in the Brexit process giving their recollections of what happened, and when and how.

There are some fascinating insights. There is Philip Hammond’s horror, seated in the audience in Birmingham at the 2016 Conservative Party conference, at the speech his prime minister was making that set the course of her premiership (“All I remember thinking was, ‘there will be a television camera in your face. If you move a muscle, it will be the story on the front page of every newspaper tomorrow’”).

Chris Grayling was, on the other hand, ”the only person in the cabinet doing active preparations for no deal in the face of intense opposition from some others in government, particularly the chancellor”.

Both men served in the same Cabinet till the end. Perhaps the only other perspective they have in common on Brexit is disillusionment at the failure of the Theresa May government to successfully manage the process through to a resolution.

On the Leave side of the referendum campaign, Paul Stephenson, communications director for Vote Leave, makes it clear just how serious the vote back in 2016 was.

Politics, he remarks, “is a contact sport” and the “reality is you were fighting a campaign which was a fight to the death”.

That kind of raw passion contrasts starkly with the recollections of Caroline Lucas, the only Green MP, about the Remain campaign: “Tthe whole focus . . . was on such a transactional economic basis.”

Of course, we go back further than the campaigns to look at the causes of that vote to leave. Baroness Stuart of Edgbaston tells us that her Euroscepticism came about as a result of Tony Blair’s failure to reshape the European Union via what became the Lisbon Treaty.

Stuart argues that “if you wanted to find the roots of the Brexit vote, for me, it was actually the Iraq invasion and Blair taking his eye off the ball”.

All in all, and particularly as we supplement the archive in the months to come with voices from the EU side, we aim to produce a resource for all those, now and in the future, who wish to try and understand the remarkable events of the last five years.

Pandemic or not, Brexit reshaped our politics and will, in the years to come, reshape our economy. We hope that we can contribute to an accurate understanding of how it came about.

By Professor Anand Menon, Director of the UK in a Changing Europe. This piece originally featured in Times Red Box. You can read the first six interviews from our Brexit Witness Archive here.