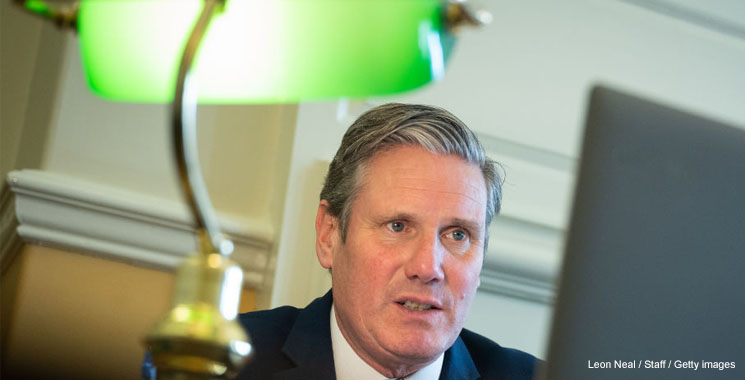 Leading the opposition is an extraordinarily difficult job. In fact, it’s at least four different jobs at the same time, each of which needs different skills.

First, there’s the immediate task of opposition: challenging the government, holding it to account and scrutinising legislation.

That role is particularly sensitive at a moment of national crisis, but it is also especially important. At a time when government has been vested with unprecedented powers, it is more necessary than ever that someone holds those powers to account.

The second key job is party management. As leader of the Labour Party, Keir Starmer has to run a large organisation with a long history of fratricidal warfare.

He needs to keep half a million members engaged, while negotiating some kind of peace between Labour’s warring factions.

He must also lead the party’s response to the report of the Equality and Human Rights Commission into anti-Semitism.

Third, there’s a campaigning role. A leader of the opposition must always be preparing for the next election: building popular support, energising the party and moving public opinion onto Labour ground.

Finally – if everything else goes well – the leader of the opposition is a PM-in-waiting. He or she must be ready to govern and must build a compelling programme for government.

So leading the opposition isn’t so much a job as a multiple personality crisis. It’s a difficult role at the best of times, and the combination of a hostile media environment with the party’s long enthusiasm for conspiratorialism makes it especially challenging for a Labour leader.

It is perhaps not surprising that only four leaders in Labour’s history have made the transition from leader of the opposition to Prime Minister. At least two are now widely regarded by the party as traitors.

Of the four main tasks confronting Starmer, the priority is the immediate job of opposition. That is a delicate task when the Prime Minister has recently come out of hospital, but Labour should not be embarrassed about it.

Despite the authoritarian vapourings of the tabloid press, opposition is not ‘sabotage’ or ‘treachery’. On the contrary, constructive opposition is a public service, and one of the best safeguards we have for good government.

If there is one political lesson that Britain needs to relearn, it is the case for constructive opposition. Ministers are currently being asked to make decisions that will determine whether people live or die, and that will reverberate through the economy for decades to come.

A cabinet of angels would not get all those decisions right. Having someone whose job it is to ask uncomfortable questions; to make sure that information is in the public domain; and to give a voice to those who might have been shut out of decision making is not a distraction from government; it is how we get good government.

Labour has a lot to contribute here. Its links with the unions, with healthcare workers, with voluntary organisations and with poorer and minority voters allow it to bring a lot of important voices to the table.

These are voices with real expertise in healthcare, procurement and economic management, who can speak with authority on subjects like the crisis in care homes and the challenges of returning to work – both raised to good effect by Keir Starmer in recent Prime Minister’s Questions.

Labour should be working to amplify those voices in national decision making, as a means not only to challenge government policy but to help improve it.

Opposition is not just a public service; it is a democratic duty. Britain is in danger of taking too seriously the ‘winner-takes-all’ rhetoric of Westminster elections, and of assuming that the government alone has a democratic mandate.

Yet in a constituency system, the opposition has its own democratic legitimacy. Every MP in the Commons has the same democratic mandate: they have each won an election in their own constituency.

As the party that won a majority of seats, the Conservatives have the right to form a government; but the opposition parties have a democratic duty to represent the principles for which their constituents voted. Opposition is a part of the democratic process, not an attack on it.

Alongside the immediate business of opposition, Labour must also plan for the longer term. This will involve both detailed policy work and careful ‘story-telling’.

Covid-19 will reset the course of British politics for years to come, but we do not yet know how. In the past, Labour has too often convinced itself that big, external shocks would move British politics to the left, only to watch in amazement as the opposite happened.

In 2008, for example, when the global financial crisis struck, many on the left anticipated the end of neo-liberalism and the emergence of a more social-democratic settlement.

Instead, it was the Conservatives who produced the most politically-effective account of what had happened.

A crisis in the private sector was recast as a crisis of public spending: and the result was a decade of austerity and Conservative government.

If Labour wants the legacy of this crisis to be social-democratic, it will need to shape how people understand what is happening and how they remember it.

It will need a compelling story about why the economy was so vulnerable to a shock of this kind, why the burden fell so unevenly, and about the people and values that were mobilised to tackle it.

Labour will also need an inspiring account of how to build a more hopeful world afterwards – probably in more straitened financial circumstances. The Labour Party did that very effectively during the Second World War and laid the foundations for the Attlee governments.

The Conservatives did it skilfully after the Winter of Discontent and the financial crisis. It is now Keir Starmer’s task.

The ability to marry good storytelling with good policymaking is perhaps the greatest challenge of Opposition. If politics is only about story-telling, the result is a PR strategy instead of a government.

But a party that can tell a story that links the present to a better future, and that sets out a credible policy route for getting there, can do big things in office and build lasting democratic consent.

That is the challenge for Labour today. It is also its opportunity.

By Dr Robert Saunders, reader in Modern British History, at Queen Mary University of London. Dr Robert Saunders spoke at the UK in a Changing Europe’s webinar on how Labour should oppose during a national crisis.