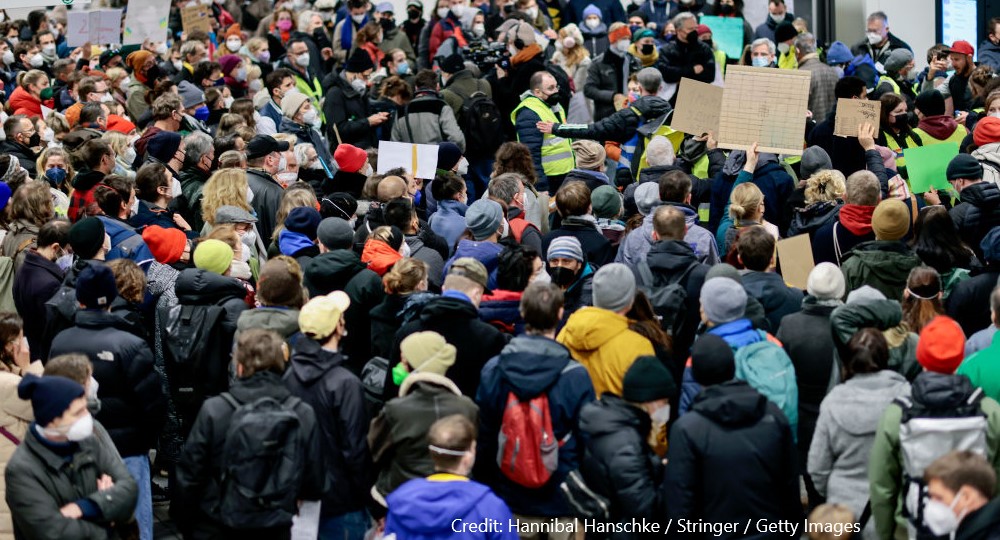 On 21 October 1941, the Wehrmacht was within seven miles of Kharkiv. Over the summer, German forces had overrun vast swathes of Soviet territory, quickly capturing all of Ukraine. The Soviets applied a scorched earth policy, devastating Ukraine, and evacuated 3.8 million people. Following standard tactics, the Wehrmacht launched a bombing raid, followed by an artillery barrage. They took complete control of the city on 24 October.

By then, the population had shrunk to 300,000 people. Kharkiv would be the site of two more battles between the Red Army and German forces, including urban warfare in which merciless SS troops fought house-to-house in the Spring of 1943. By the end of the war, the city was a blackened shell.

Eighty years ago, it was unimaginable that one day Russian forces would launch an artillery barrage on Kharkiv and that Ukrainians would defend themselves with German arms. But that is now our world. Ukraine in 2022 is, as the Foreign Secretary observed, like the Ukraine of 1941.

It is so in two ways. The most obvious is as the victim of an unprovoked, illegal, and brutal assault. The less obvious is as the source of what the UNHCR claims will be ‘the greatest refugee crisis this century.’ The claim is possibly hyperbole – 12.5 million forcibly displaced Syrians exceed the projected 10 million Ukrainians.

Some definitions are in order, as commentators throw the term ‘refugee’ around loosely. Under Article 1 (2) of the 1951 UN Convention relating to the status of refugees, a refugee is one with a ‘well-founded fear of persecution for reasons of race, religion, nationality, membership of a particular social group, and political opinion, [who] is outside the country of his nationality and is unable or, owing to such fear, is unwilling to avail himself of the protection of that country.’ An asylum seeker is one seeking formal recognition of this status.

Conservative politicians often demonize refugees because they are not technically fleeing persecution, and the Convention definition allows such a critique. Bombs and bullets do not, as such, persecute. For this reason, among others, the principle of non-refoulement, an obligation not to return someone to a place where they ‘face torture, cruel, inhuman or degrading treatment or punishment and other irreparable harm,’ is more important for refugees than Article 1 (2).

There is no right to refugee status under the Convention, but article 33, supported by multiple other Conventions, creates a state duty of non-return where people face harm. A refugee is thus a person facing a well-founded fear of harm.

This understanding of a refugee also better fits the facts since war, rather than political persecution, produces most population displacements. It always has. World War II resulted in the flight or expulsion of at least 70 million people. Today, the top-five refugee-producing countries are Syria (6.8 million refugees), Venezuela (5.4 million), Afghanistan (2.8 million), South Sudan (2.2 million), and Myanmar (1.1 million).

These five countries account for almost two-thirds of the world’s total refugee population of 26.4 million people. In every case except Venezuela, they are fleeing war. For four decades, the world’s largest refugee outflow was the product of another Russian (well, Soviet) invasion: of Afghanistan in 1979.

The mass arrival of Ukrainians in Hungary, Poland, Romania, and Slovakia was eased by visa-free travel from Ukraine to the EU, but the vast majority of refugees always end up in contiguous states: most Afghans fled to Iran and Pakistan; most Syrians to Turkey, Jordan and Lebanon; most South Sudanese to Ethiopia, Sudan, and Uganda; and most Burmese to Bangladesh.

This fact is, on one level, unremarkable: refugees do not want to leave but they need safety, and they seek it in the first country they find. That country generally accepts them. For all the anti-refugee rhetoric, hate speech, and occasional horrendous attacks on refugees, most countries respect the non-refoulement principle. They allow refugees from neighboring states to enter, and, despite intermittent threats, they do not forcibly return them to places where they face harm.

The EU’s openness to Ukrainian refugees is not, as hysterical, hard-left Twitter would have us believe, the product of Aryan solidarity but rather the basic exigencies of mass influxes. When millions of people move en masse towards a country, its government has two choices: open the border or open fire. States, democratic and undemocratic, Convention signatories and non-signatories, generally open their doors.

Although Syria is hardly contiguous to Germany, Berlin faced a similar choice between doors and bullets. This choice, not Angel Merkel’s naivety, as right-wing commentators would have us believe, led Germany to accept one million Syrians.

Bombs, bullets, missiles, and shells certainly harm, and Ukrainians fleeing the country are refugees. However, the status granted by the EU to them falls short of the full refugee recognition accorded to Syrians. To manage the influx, the EU dusted off a long-forgotten directive, which allows them to grant Ukrainian refugees three years’ temporary protection.

The US federal government regularly accords this status to refugees from Latin America, but it is rare in Europe, last used for Kosovar refugees. EU member states, who have jurisdiction over migration policy, can deviate from the directive in a more liberal manner, as Ireland has done.

Whether Ukrainians graduate to full refugee status or not depends on the outcome of Russia’s war. The hope is that Ukrainians will return home and temporary protection will cease, but the precedents are not encouraging.

If Moscow wins this war, EU member states should transform temporary protection into full refugee status and integrate Ukrainians into their educational systems, labour market, languages, and societies. Hannah Arendt’s oft-cited claim that citizenship is the right to have rights is, in fact, wrong; resident foreigners have all sorts of rights. But there is nothing better than citizenship, for refugees and everyone else.

By Randall Hansen, Director of the Centre for European, Russian and Eurasian Studies, the Munk School & Canada Research Chair in Global Migration, Department of Political Science at the University of Toronto. He is the author of Disobeying Hitler: German Resistance in the Last Year of World War II (Faber, 2014), Fire and Fury: The Allied Bombing of Germany and Japan (Faber, 2020), and War, Work & Want: Global Migration from OPEC to Covid 19 (OUP, 2023).