Another European Council, the same dance 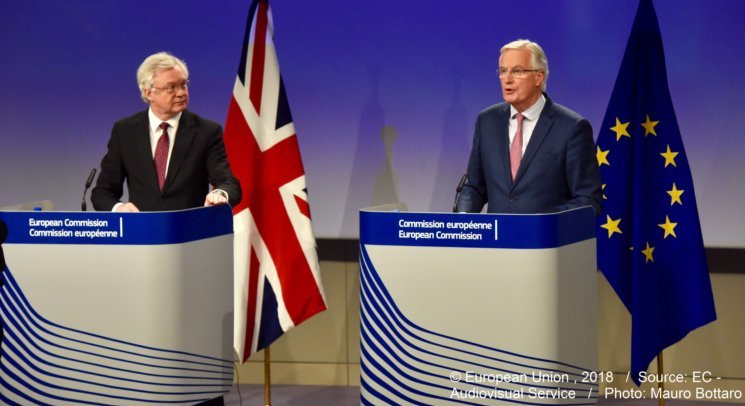 The lead-up to the March European Council has followed a by now familiar pattern: early defiance from London, accompanied by a charm offensive involving trips to select national capitals to explain the UK’s position to key governments and potential allies with few tangible results; a response from Donald Task or Michel Barnier that mixes expression of regret at the result of the referendum and a wish for the UK to remain a close friend and partner, with a firm reminder of the principles underlying the EU’s approach to the negotiations; and concessions on the part of London in the face of EU unity before the decisive moment.

Despite the early confidence of some of its ministers, the May government has found the Article 50 negotiations difficult. The EU moved decisively and early, and has been able to control the process.

In the past, the UK government was able to mobilise one of the most highly respected administrative systems in the EU, but the reorganization of machinery to support its European policy has made the UK less formidable, despite the high respect in which the officials running its negotiations are held.

For these negotiations, the EU has been able to draw on the extensive expertise of Commission departments and the Council Secretariat.

Moreover, at the political level, divisions within the Cabinet, as well as within the wider party, have reduced the PM’s room for manoeuvre. Theresa May’s failure to secure a sweeping victory in the 2017 elections has not helped strengthen her authority.

However, the EU side has also been stronger and performed better than many expected. First, the leaders of the main EU institutions have worked closely together. The usual inter-institutional rivalries have been scarcely evident since the referendum.

Second, as we reported in October and the Institute for Government has confirmed, the EU27 have been far more united for far longer than observers had anticipated. The member states have very different relationships with the UK and will be differently impacted by its departure.

For the Netherlands, Austria, Belgium and especially Ireland, the economic toll of Brexit will be significant. For the countries of Central and Eastern Europe, as well as Spain, the fate of their nationals residing in the UK is a prime concern. For Luxembourg, financial markets are key.

Yet, despite the costs from Brexit that they will bear individually, the countries of the EU27 have made it clear that the EU’s integrity and stability is of higher value. Even with respect to financial services, where it appears that the hard line advocated by France has been successfully contested by Luxembourg, leading to an addition to the draft negotiating guidelines, differences have been contained by an insistence on ‘mutual equivalence’.

Third, with the recovery of the European economy, there is a greater confidence among the EU27 than there was two years ago. Euroscepticism is not generally the threat that it was in 2015.

As a result, the UK has found it difficult to find allies. It has also discovered in its bilateral contacts with EU partners that Brexit is not a top priority for the EU27 individually or collectively, who now see the UK’s departure as a technical issue where it is important to find a stable and satisfactory solution.

Finally, there is an understanding among the EU27 and the EU institutions that Brexit, to paraphrase Christian Lequesne, ‘is a legacy of the past that needs to be resolved quickly’, so that the EU can move on.

Alongside the preparations for the Article 50 negotiations, the political leaders of the EU27, and the European Commission, have been discussing the future development of the Union.

The sense in national capitals across the EU is that Brexit is a technical issue. Since the best option – the UK’s continued membership of the EU – is not possible and the UK seems unable to grasp the consequences of the red lines that the May government itself has declared, the process is one of damage limitation that needs to be brought to an orderly conclusion in compliance with the principles that the President of the European Council announced at the beginning of the negotiations.

Short of unexpected developments, the leaders of the EU27 will adopt the draft guidelines proposed by the President of the European Council on 7 March, outlining the mandate for the negotiations of the future relationship with the UK.

That will set the scene for the June European Council, where the EU27 will be looking for the UK to come up with a solution to the question of the Irish border if the backstop is not to come into play.

The call for ‘intensified efforts’ and reiteration of the point that ‘nothing is agreed until everything is agreed’ will only put further pressure on London.