Anti-immigration attitudes are disappearing among younger generations in Britain 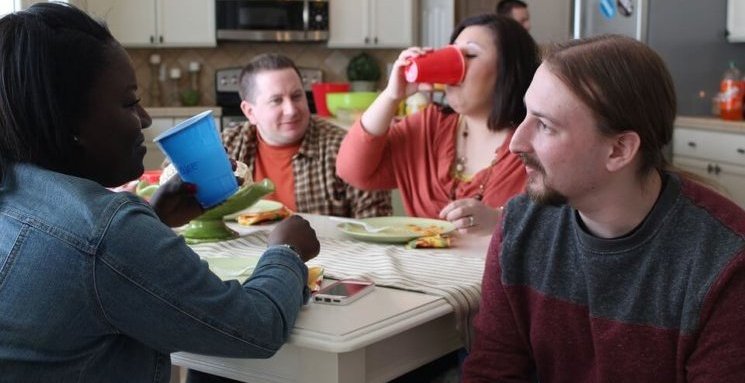 Britain’s long-running drama of exiting the European Union has revealed stark generational differences. Among some of the explanations suggested for the 2016 referendum result was how people perceived the issue of immigration.

Our research, published in a new working paper, looked at how views on immigration change over time among different age groups. Our findings – that there are significant, persistent differences between generations when it comes to their attitudes to immigration – are particularly relevant in the context of the UK’s Brexit referendum.

Long before the Brexit referendum, we began investigating whether people in Western democracies that had experienced large-scale, post-war immigration might be growing more tolerant of living in a more diverse society. Some research suggests such a shift is unlikely, as people tend to respond to increases in diversity by feeling threatened and hostile. Others, however, predict that more diversity may lead to more contact between groups of people from different ethnic origins, which may eventually increase tolerance and acceptance.

So far, much of the existing research on attitudes to immigration has largely ignored the potential importance of generational differences. Yet other research has found these different generations have different views on various social issues, including valuing individual freedom over order and environmental protection.

Researchers have long contended that such generational differences are likely because the conditions when people “come of age” politically and socially – generally thought to be between the ages of 15 to 20 – are instrumental in shaping their opinions, attitudes, and behaviours later in life.

In our research, we used a public opinion dataset that spans 2002-17 to follow the attitudes of several generations of British citizens. We looked at how their attitudes to immigration shifted over this period and whether the views of some generations were persistently different from one another. 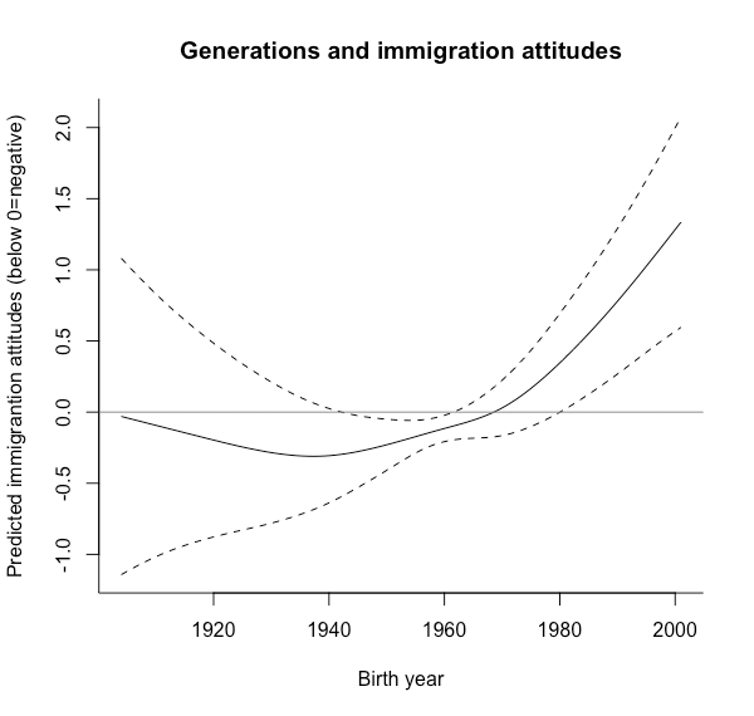 The solid line is the average immigration attitudes across birth cohorts, controlling for factors including education, gender, individual economic circumstances, and survey year. The dashed lines are the range of confidence surrounding these averages. Source: McLaren et al., Author provided.

The Impact of diversity

This trend tracks post-war increases in levels of diversity in the UK. As the country has become more diverse, and more open to immigration, younger generations who’ve grown up with this increased diversity are the most positive about it. So something about the experiences of these younger generations appears to be leading them to different conclusions about immigration compared to their elders.

One possibility is that the younger groups are experiencing far more contact with immigrant minorities than their elders, and our research shows that this is indeed the case. It’s also possible that younger generations came of age at a time when public debates around immigration were changing and social norms along with them – and people were becoming more intolerant of intolerance.

Exposure to more affordable international travel and to friends and relatives who’ve worked abroad may allow these younger groups to empathise more with being a “foreigner” than their parents do, or maybe they feel more like “citizens of the world”. Other researchers are also finding major generational differences in other social attitudes over long periods of time, with younger generations having more socially liberal attitudes.

But society remains dominated by generations born before 1970, where anti-immigrant attitudes are most prevalent. These older generations still make up the bulk of the population, vote in the largest numbers and – whether in politics, media, business, or culture – dominate key positions in society.

Our findings highlight the possibility of growing tolerance of diversity in the UK as a result of “generational replacement”, as those born after 1970 become more central to society in the coming decades. This makes it more likely that continued diversity brought about by immigration could soon be met with more positive reactions.

This is clearly relevant in relation to the promise by Brexiteers to “take back control” of immigration in the context of the UK’s relationship with the EU – and one of the main drivers for the 2016 referendum in the first place. These findings therefore seem crucial to the UK’s impending departure from the EU. In the not-too-distant future, a key element which drove the vote to Leave – concerns over immigration – may carry far less importance.

By Lauren McLaren, Professor of Politics, University of Leicester; Anja Neundorf, Assistant Professor in Politics and Research Methods, University of Nottingham, and Ian Paterson, Lecturer, University of Glasgow. This article is republished from The Conversation under a Creative Commons license. Read the original article.