Are Leave voters less knowledgeable about the EU than Remain voters?

Since the UK voted to leave the EU, there has been much debate about whether voters were sufficiently well informed prior to casting their ballots. One frequently heard claim is that Leave voters were less well informed than Remain voters.

For example, in a short segment for BBC Newsnight, the scientist and commentator Richard Dawkins characterised the Leave vote as “a slender majority of an ignorant and misled public”.

To test this assertion, my colleagues and I conducted a study comparing levels of knowledge about the EU among Leave and Remain voters. We gave a 15-item EU knowledge quiz to a nationally representative sample of the British population via an online survey.

Assessing whether Leave voters were less well informed than Remain voters is obviously of interest, given that one might view an electoral outcome as less legitimate if those who voted against it were substantially more knowledgeable than those who voted for it.

The political scientist Jason Brennan has defended what he calls the ‘competence principle’, namely that ‘political decisions are presumed to be unjust if they are made incompetently or in bad faith, or by a generally incompetent decision-making body’.

Our study did not seek to establish whether the electorate overall was sufficiently well informed to satisfy this principle; rather, it sought to establish whether there was a significant disparity in knowledge between Leave and Remain voters, something which might also be considered grounds for questioning the legitimacy of a referendum result. 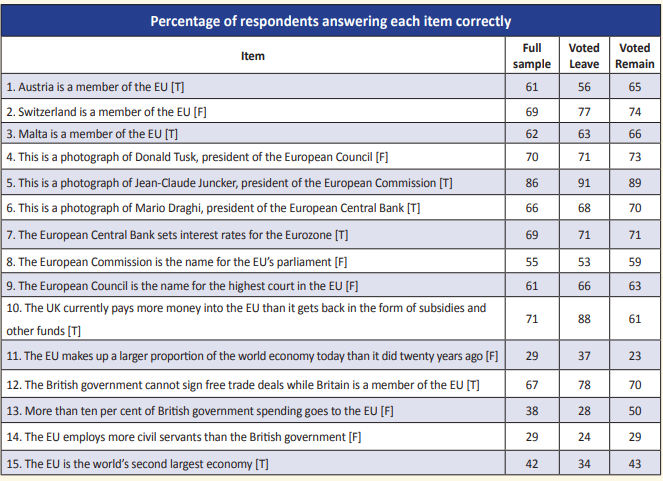 Our quiz comprised nine ‘ideologically neutral’ items, as well as six that we deemed more ‘ideologically convenient’ for one side or the other. Each comprised a positive statement, followed by the question ‘True or false?’.

For example, one read: ‘The British government cannot sign free trade deals while Britain is a member of the EU. True or false?’ The correct answer is ‘true’, and since being able to sign free trade deals is generally seen as a good thing, we deemed this item more ‘ideologically convenient’ for Leave voters.

Another item read: ‘More than ten per cent of British government spending goes to the EU. True or false?’ The correct answer is ‘false’, and since spending less on something represents value for money, we deemed this item more ‘ideologically convenient’ for Remain voters.

Our study uncovered three key findings: First, despite the fact that Remain voters scored higher on a short test of probability reasoning (a result that accords with what has been previously reported), there was – contrary to Dawkins’ claim – no average difference in EU knowledge between the two groups.

Second, both Leave and Remain voters were more likely to answer correctly on items that were ‘ideologically convenient’ for them. There are two plausible explanations for this.

Respondents may have engaged in ‘motivated reasoning’: when confronted with an item to which a particular respondent did not know the answer, she may have selected whichever option was most psychologically comforting for her, given her ideological priors.

Or, respondents may have engaged in ‘motivated information seeking’: in the months leading up to the quiz, they may have preferentially consumed sources of information that flattered their ideological priors, leading them to acquire more knowledge about their own side than the opposing one.

One possible explanation for this discrepancy is that ideological bias (the tendency for partisans to give ‘ideologically convenient’ answers) overwhelmed the advantages that would otherwise have been conferred by older age, higher education etc.

It is important to make clear that our finding of no average difference between Leave and Remain voters does not imply that voters overall were well informed prior to making their decisions. Nor does it rule out the possibility that misinformation had a decisive impact on the result of the referendum, as some commentators have argued.

What it does do, however, is provide tentative evidence against the claim that Remain voters were substantially better informed than Leave voters.

By Dr Noah Carl, Toby Jackman Newton Trust research fellow at The University of Cambridge. This piece originally featured in the report  ‘Brexit and public opinion 2019‘.