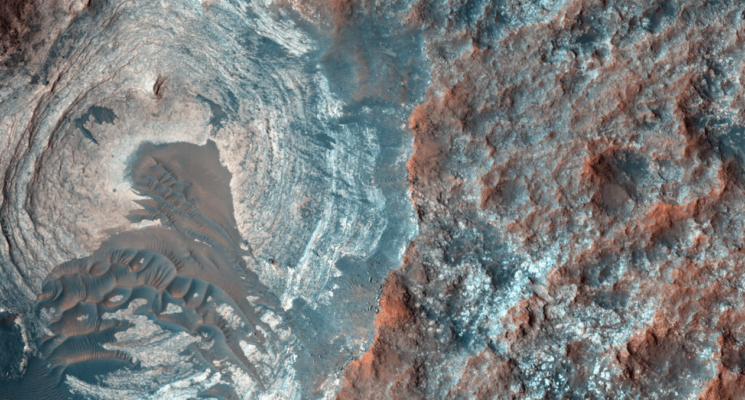 At the end of the two-year period of Article 50, all eyes have been on Westminster and the meaningful (and less meaningful) votes, amendments and delays to the process. As Patrick Diamond has written, the issue of Europe has divided our political parties over time, and perhaps this time sundered them beyond repair. But is the same true of the electorate? Can the divides revealed by the vote in June 2016 be healed?

Since the vote to leave the European Union, there has been a steady stream of publications considering new divides and new identities among the British electorate. What unites these divides is a set of value positions, variously referred to as the ‘second dimension’, the ‘other dimension’, ‘open vs closed’ and – as here – the label applied when it was first measured in the British context, the ‘liberal-authoritarian’ dimension.

This dimension is strongly related to education level and has repeatedly been shown to be one of the strongest predictors of whether an individual voted Leave or Remain in the referendum.

Data from the British Social Attitudes Survey allow us to look at the extent to which these value positions have changed over time. Generally, they are relatively stable, enduring reflections of the electorate’s orientation toward economic and social freedom, justice and equality. Where changes occur, we expect these to be relatively slow and reflect structural changes in the electorate (such as the increasing proportion of people going to university rather than short-term responses to political circumstances). Over the last thirty years, the British public have on average held positions on these scales that were a little to the ‘left’ on economic issues and to the ‘authoritarian’ end of the social dimension.

The value positions are derived from answers to a series of questions:

People are asked to express how much they agree or disagree with each statement on a five-point scale from strongly agree to strongly disagree. The average of the items is taken to form a scale (running from one to five) with low values representing the ‘left’ and ‘liberal’ ends respectively, with a value of three being a neutral point on the scale resulting from giving the ‘neither agree nor disagree’ response to all items. 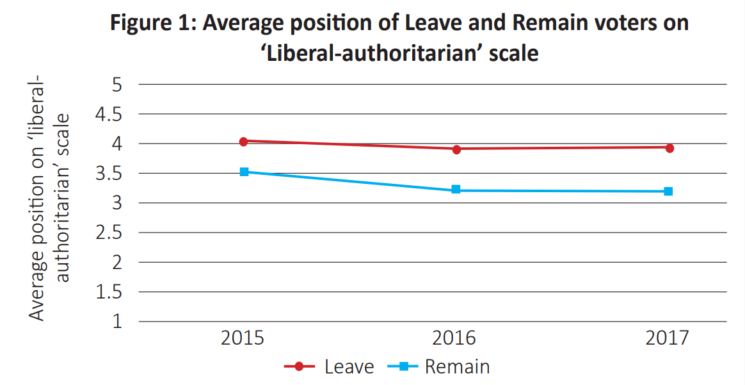 Differences between Leave and Remain voters on this value divide are clear. Those who voted Leave are significantly less liberal than those who voted Remain. This is not a new finding, but these data also reveal that this gap widened after the referendum.

After the referendum, those who voted Remain moved further toward the ‘liberal’ end of this scale, while those who voted Leave stayed in their more authoritarian positions, resulting in a larger gap between the groups in 2016 and 2017 than was the case in 2015. This suggests that the referendum, in throwing this divide into the spotlight and keeping it there, has exacerbated pre-existing divisions.

But not everything has changed. As figure 2 below shows, not only is there no difference between the values of Leave and Remain voters on economic issues, there is also no equivalent ‘shock’ to these values after the referendum. In this sense, there is substantial continuity and the electorate of 2017 looks much the same as that of 2015. 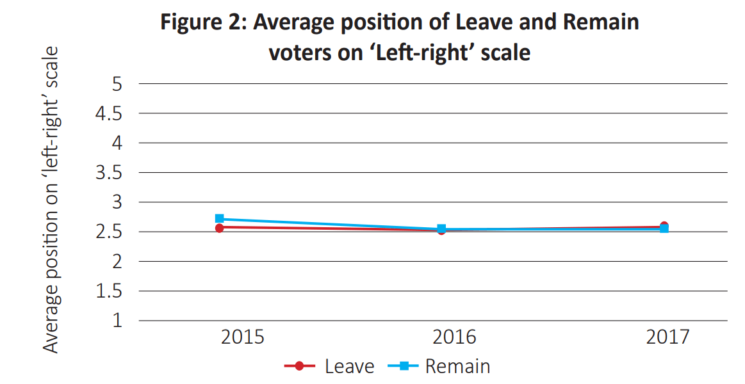 While these left-right values divide the electorate, they do not follow along the lines of the referendum vote. Instead they are most closely related to the divide between the two main Westminster parties. Labour voters are more left leaning while Conservative voters are further to the right. The referendum result cuts across party lines, and we find Leave and Remain voters among both Labour and Conservative voters. Similarly, economic values crosscut the referendum result; we cannot label either Leave or Remain as being the more ‘left-wing’ position on these issues.

Constantly portrayed as at loggerheads, it may be tempting to think ‘Remain voters are from Mars and Leave voters are from Venus’, but there are areas of commonality. Large majorities (four out of five) of both sides think the gap between those on high incomes and those on low incomes is too large. Around half of each side say that health should be the highest priority for extra government spending. However, neither side trusts the government to put the needs of the country over party interests (only around one in five of both sides trust the government ‘most of the time’ or ‘just about always’).

What might this mean in terms of the possibility of healing the Brexit divides almost three years after the votes were cast? It seems likely that while the focus is on Brexit itself, these divides will only deepen. The Brexit divides now awakened are unlikely to disappear.

The shuffle of Remain voters to (even) more liberal positions after the election may open space for parties based on these value divides. The Liberal Democrats have performed well in more liberal groups (most notably in 2010); and it is likely the newly formed ‘Independent Group’ will also align with these voters. But this is not the only divide, should a new election campaign be fought on a broader range of issues, there is a suggestion here that they might take a back seat.

Where focus is on the economy, inequality, big business and health, the old logic of the two-party system could reassert itself. There are signs here of some areas of agreement between Leave and Remain voters on these issues. It seems possible that these old divides of economics may be able to at least provide a sticking plaster, if not heal, the ‘new’ social divides, perhaps holding together electoral coalitions for Labour and the Conservatives as in the 2017 election.

By Paula Surridge, Senior Lecturer at the University of Bristol. This article is from our ‘Article 50 two years on’ report.