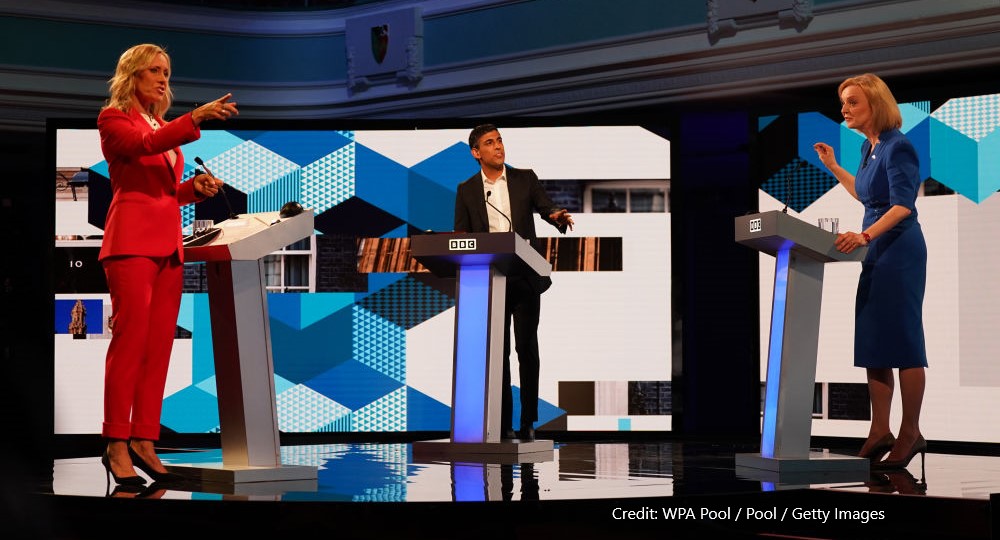 The Conservative leadership contest has crystallised around the issue of whether to lower taxes immediately. Liz Truss is proposing to cancel the planned increase in corporation tax from 19% to 25%, suspend the green energy levy and reverse the recent increase of 1.25% in national insurance payments. These changes are worth about £30 billion per annum. Is a fiscal loosening of this sort justifiable?

Sunak has argued that the need to get a ‘grip’ on inflation rules out cutting taxes. If taxes were cut now, it would indeed – absent any other policy change – cause demand and inflation to rise. However, the threat of that would prompt the Bank of England to set interest rates higher than otherwise, and shrink central bank balance sheets faster than otherwise. So, in all likelihood, cutting taxes would probably not have significant implications for inflation.

Another issue is whether this loosening would be consistent with the government’s fiscal rules. Sunak alluded to this by referring to Truss’ plans as ‘something for nothing economics’. The fiscal rules are to avoid financing current spending with borrowing, and to have debt falling as a share of GDP inside a rolling forward plan of 3 years.

The Office for Budget Responsibility estimated in March of this year that there was room for about £30 billion of loosening, either through tax cuts or increased spending, within these fiscal rules. Subsequently, increased costs of servicing the debt and likely increases in public sector pay have probably eaten away all that room. Yet, there is nothing particularly optimal about those fiscal rules. They have changed several times, and will no doubt change again.  Macroeconomics leaves a fair amount of ambiguity as to what is appropriate.

Lurking behind the issue of consistency with the fiscal rules is the more fundamental economic question of what tax cuts would imply for future revenues, and therefore the quantity and quality of public services. An enduring hope on the right is that cutting taxes incentivizes economic activity so much that its expansion more than compensates for the lower percentage tax take, avoiding a fall in revenues and even boosting them.

The idea is known as the ‘Laffer Curve’, after former economic advisor to President Reagan Art Laffer. The curve represents an assertion that, beyond some point, tax rate rises stop increasing revenues and start to distort and destroy activity so much that they begin to fall.  The difficulty with this assertion is that it does not – away from the extremes of very high taxes indeed – have support in the data. The curve was reputedly simply made up and first drawn on a restaurant napkin.

Indeed, if you look across countries there is no robust causal connection from the size of the state to income per head, or growth in income per head. While taxes at very high levels distort and discourage economic activity, at moderate levels the effect is probably weak.  And sound spending funded by those taxes provides public goods that facilitate economic activity rather than simply crowding it out. Also there may be causality the other way, as richer countries choose to enlarge their state with confounding and hard to measure influences on prosperity.

In the absence of a favourable Laffer effect, therefore, tax cuts either imply perpetually higher levels of borrowing, and debt rising faster relative to GDP than before, or lower provision of public services. But while there may well be ample fiscal space for substantially more borrowing in the short term, it’s hard to justify borrowing merely to plug a gap between the current tax take and government spending. That is, unless that spending was only temporarily higher and was investing in something which would provide a return for future generations to use to pay down the debt incurred. Over the longer term, debt to GDP cannot rise indefinitely.

This is in the first instance a political question. The Conservative Party’s introspection post Johnson is partly about re-examining its purpose; whether it wants a small or a large state, which means low or high taxes. But there is also a more immediate political question facing it: namely, will public service cuts that accompany permanently lower taxes be popular and help or hinder the Conservative Party at the next election?

Against that backdrop, it is worth thinking about where those cuts could fall.

The NHS is facing considerable hardship in the aftermath of the Covid pandemic. Shrinking local authority provision, already meagre after the early 2010s austerity, would aggravate already problematic social care provision. As the cost of living crisis worsens, it is going to be politically difficult to avoid increasing benefits, let alone cutting them.

The threat from Russia, and the cost of resupplying the army with supplies sent to Ukraine would make it a surprising time, especially for a Conservative government, to cut funding to the armed services.

Education funding could be cut but a gap has already opened between private and state education funding and widening this further could prove unpopular. Civil service employment has risen substantially since Brexit, but this is because of the demands of delivering it and its associated benefits. The ‘cost of living’ crisis is set to push up public sector pay. Attempting to deliver a real terms tax cut by forcing real terms pay cuts may prove politically divisive and risk potentially damaging disputes with public sector unions.

The Johnson government set much store by its promise to ‘level up’ the UK, an activity hard to define, but likely to cost money, and one that may be damaging to back away from entirely.

At the same time as there are a lot of demands on public services, Brexit and the pandemic – by dumping many out of the labour force through long Covid – look to have shrunk the tax base available to fund them. Cutting taxes and public services are choices a post-Johnson government is free to make, but it would be politically bold move right now and, therefore, I would judge one that would be unlikely to hold for long.