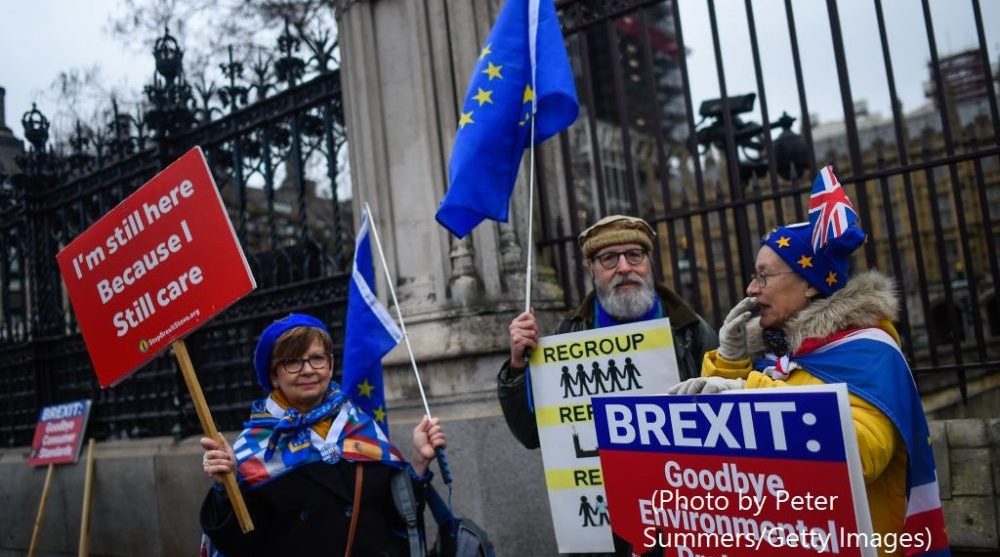 Brexit has been the dominant divide in British politics for the last five years. The mutual animosity of the Leavers and the Remainers shaped our increasingly fractious politics. But new research, published this week, finds that these Brexit tribes are slowly deflating.

There had been many swing voters during the referendum – four out of ten on both sides made their minds up in the last month, according to Lord Ashcroft’s survey on referendum day.

Brexit identities, however, got stronger after the result, so a key driver of the unprecedented political volatility of the last Parliament was that referendum identities mattered more than party politics.

Most voters in the 2019 European elections backed either the Brexit Party or the Liberal Democrats, with the big two parties left with a measly quarter of the vote between them.

It was a key feature, too, in Boris Johnson’s gains in a General Election later the same year, picking up unusual seats from a “Get Brexit Done” appeal to non-Conservative Leave voters.

Engaging nearly 160,000 people, the Talk/Together project is the widest ever public engagement exercise on social connection in Britain.

It spent the last nine months exploring what divides and unites our society, and what might help bring us together after Covid-19. Its new report, Our chance to reconnect, finds that referendum identities once again matter less than party politics.

This group is almost evenly split between Remainers (13%) and Leavers (12%). But half of the public said that they hold a primary political identity that is not about Brexit. That is most often a party political identity, or as supporters or opponents of independence or the Union across the UK’s four nations.

What is more, the fifth of people (21%) who do not identify with a political position or cause is a somewhat larger group than any of the specific political tribes. That means three quarters of the public no longer define their identity by their referendum vote. 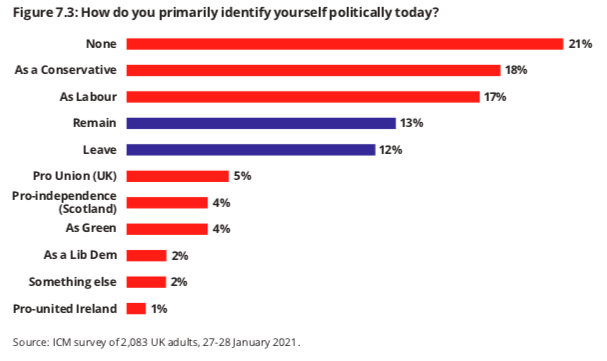 This is not a uniform pattern. Our deliberative discussions heard that Brexit remains especially salient in Northern Ireland.

It is the part of the UK most directly affected by how the new trade rules work, while new arguments about Brexit and what the deal means have reanimated the case for Irish unification and Unionist opposition to it. So the Remain identity remained higher in Northern Ireland (22%), as well as in London (20%).

But it was lower in Remain-voting Scotland (11%), where arguments about independence now take top priority, with the legacies of Brexit forming one flank of that debate. People in the East Midlands were more likely (17%) to identify primarily as Leavers.

The slow deflation of the Brexit tribes does not mean that Brexit will go away. The legacies of Brexit form part of party politics – and debates about the future of the UK too.

The quarter of the public who are still ‘Conviction Remainers’ and ‘Conviction Leavers’ remain vocal about their disdain for those on the other side.

In online responses to the Talk/Together survey, some cited “Islingtonian Remainers” or “Brexit voters of a certain IQ” as the primary cause of divisions in Britain today. If the Brexit tribes narrow towards a core group, their online clashes could become sharper than ever.

Debates over free speech or history and Empire may reactivate similar social cleavages. Differing responses to last year’s anti-racism protests – by geography, between graduates and non-graduates, and between generations – mirrored some of the demographics of Brexit, though a weak record of engaging ethnic minority citizens was one shared feature of both the Remain and Leave movements.

But three-quarters of the population do not feel so emotionally invested in the Brexit divide. Many have not changed their minds – but they want other issues to get more attention now.

Talk/Together found that the divide between rich and poor is now the social division that concerns people most beyond lockdown, an issue that cuts across the Brexit coalitions.

This existence of cross-cutting issues is one potential barrier to the UK emulating the starker binary polarisation of US politics.

In Talk/Together’s deliberative discussions, people talked about Brexit in the past tense, and could disagree more civilly about it now.

“I voted to remain. And I know a lot of friends did, a lot of people around me did. However, what’s done is done.

I think we now all understand that it’s not the result we would have wanted, but it’s obviously what has happened,” one Remain voter in the North-East of England said.

A Leave voter, taking part in an East of England discussion, saw reconciliation taking more time. “I think that a lot of people have been very angry in the UK for all sorts of different reasons, including Brexit.

We all experience different things, grief, anger, frustration, it’s always a process of working through the feelings you have, before you can come to acceptance and move on. And I think, as a nation, we need to go through this.”

Britain has a patchwork of political tribes. In terms of primary political identity, the ICM research suggests approximately 8.5 million Conservatives and 8 million Labour voters; around 6 million who identify primarily as Remain and 5.5 million as Leave; over 2 million who identity as pro-independence and a similarly-sized group who care most about the UK; about 2 million Greens and a million Liberal Democrat party identifiers.

The 10 million with no political identity are a mixed group of swing voters, the politically homeless and the disengaged.

Many may rarely see the point of voting in elections, though the 2016 turnout showed how they can change the outcomes when they do.

Each tribe plays a significant part in shaping the culture of our public conversation – yet all have insufficient support to achieve their primary goals without leadership that can mobilise within its political tribe and beyond it too.

Maybe the call to “disagree better” in politics need not be a futile call from no man’s land – but one way for the various political tribes to seek the broader support that it would need in order to prevail.

By Sunder Katwala, Director of British Future, which conducted the Talk/Together project for the Together Coalition, of which it is a founding member.