Are the new Conservative MPs really so different? Recent headlines have somewhat misleadingly claimed that it is Red Wall MPs who are behind the moves to oust Boris Johnson as leader of the Conservative Party. Misleading since the ‘Pork Pie’ plot is named after Alicia Kearns, MP for Rutland & Melton – a safe Conservative seat since its creation in 1983. Yet still a perception exists that the rebellious new generation of Conservative MPs are somewhat different from previous cohorts, that they have not been ‘socialised in Parliament’, are not really Conservatives, or that they ‘were running sandwich shops two years ago and have no bloody idea’.

But how different are the 2019 intake of Conservative MPs, or for that matter the MPs representing Red Wall seats?

Data from the 2019 candidates’ survey reveals that there is little difference between the backgrounds of Conservative MPs elected in 2019 and those elected previously, and that, rather than being wet behind the ears, the overwhelming majority of Conservative MPs elected to Red Wall seats have either experience in local government or have stood as parliamentary candidates previously.

The background of Conservative MPs over time

I initially compared the background of four groups of Conservative MPs elected at the 2019 general election: The 2019 cohort do differ significantly in terms of their secondary educational background. Over half of Conservative MPs elected in 2019 were educated at comprehensive schools, compared to little over one in five of pre-Cameron MPs. Fewer than a third were educated at fee-paying schools. 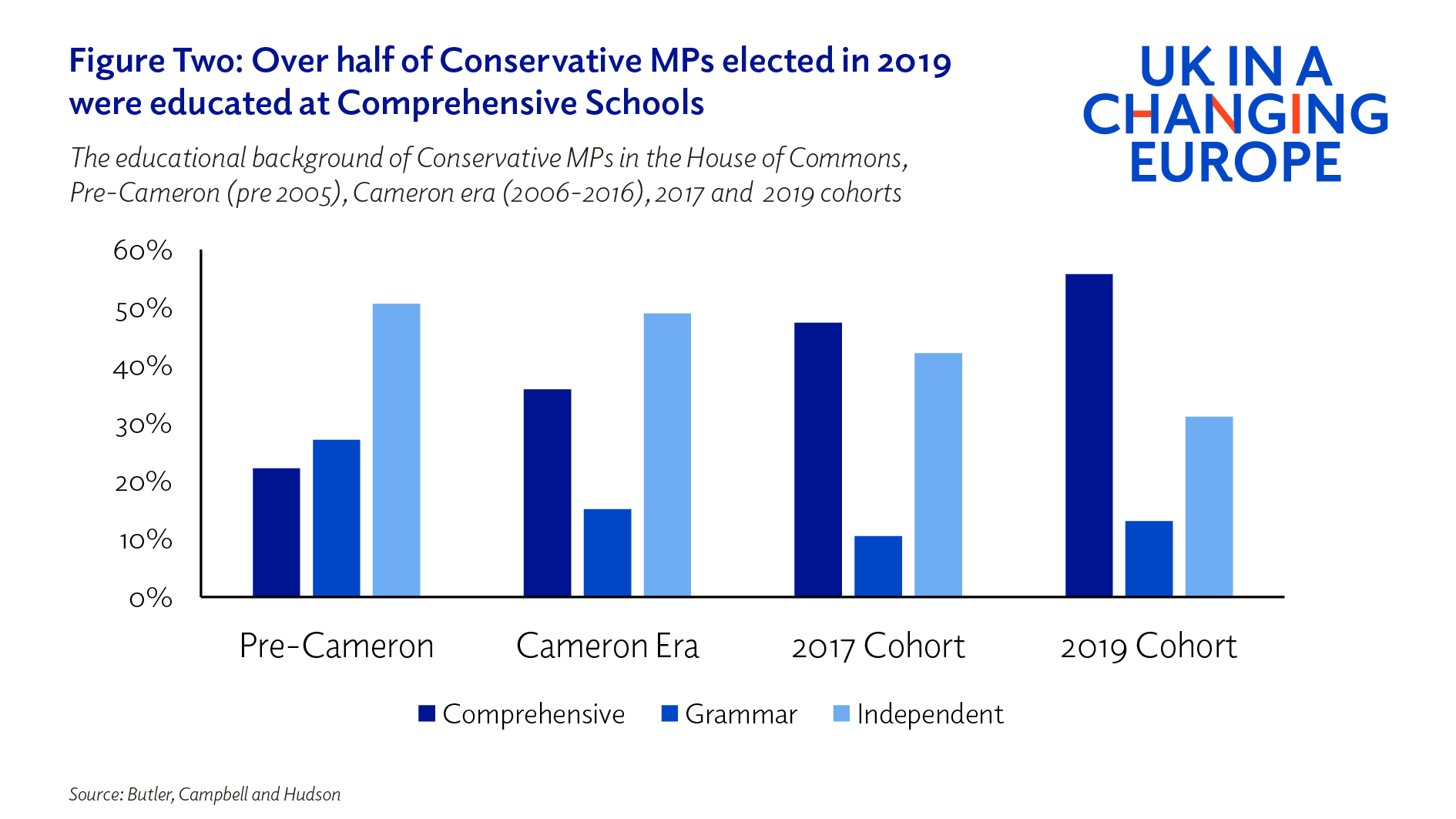 Around a third of the 2019 cohort are female, compared to just seven per cent of the pre-Cameron cohort remaining in the House of Commons. The 2019 cohort are also more likely to be LGBT than previous cohorts, but slightly less likely to be from an ethnic minority than Conservative MPs who were first elected in the 2010s. 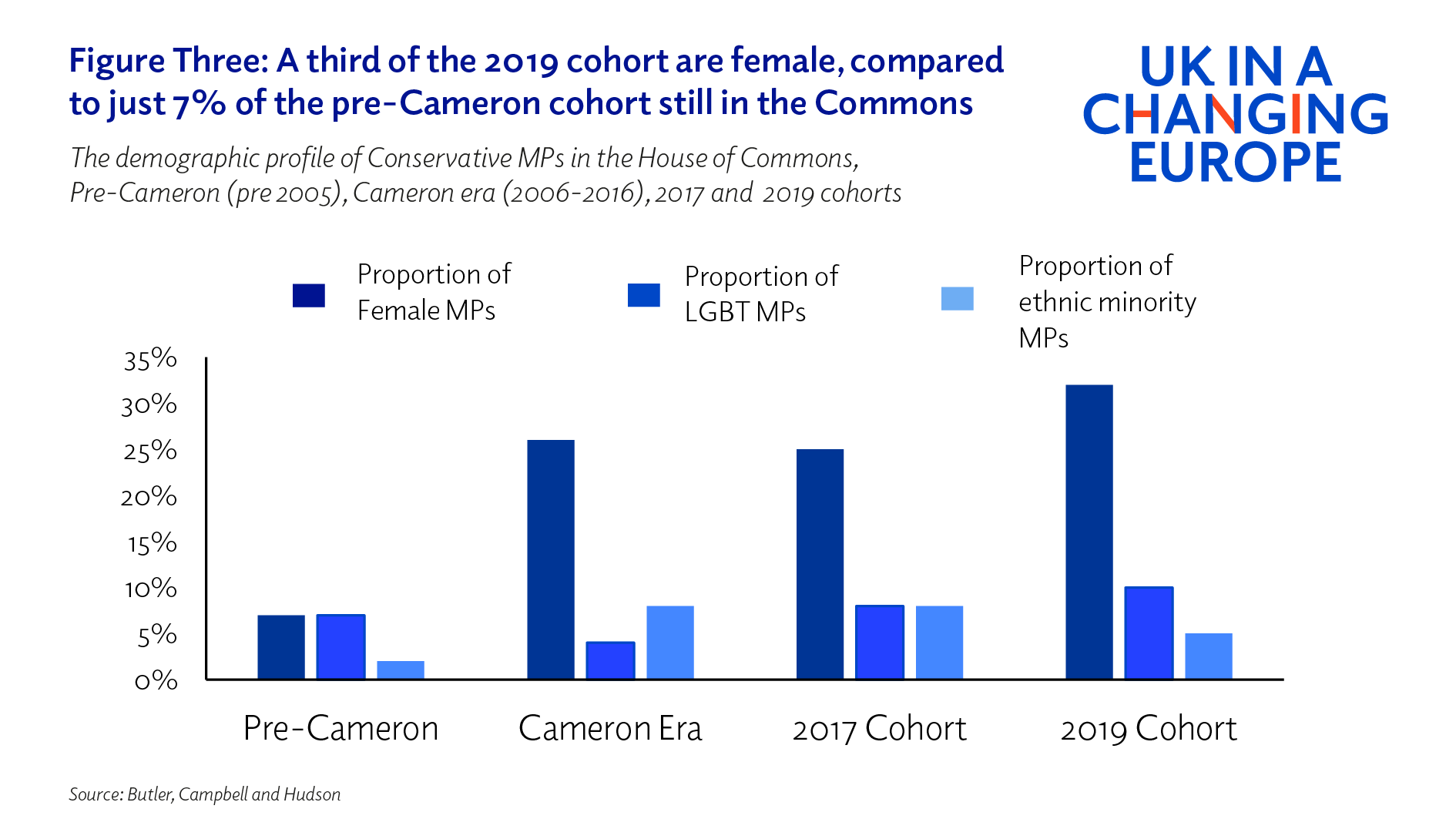 Only one of the Red Wall MPs is identified as being of an ethnic minority, but this may reflect a recent Conservative Party tactic to select ethnic minority candidates in safer seats to improve the diversity of its parliamentary party. Red Wall MPs are also more likely to be state educated, with 79% of those for whom we have data having attended non fee-paying schools, compared to 64% of new MPs outside the Red Wall.

There are no notable differences in the occupational backgrounds of new MPs within or outside the Red Wall, although the Red Wall cohort includes two MPs with a background in manual work: former coal miner Lee Anderson in Ashfield and former electrician Mark Jenkinson in Workington.

Finally, the suggestion that Red Wall MPs are more political naïve is not well supported by their backgrounds. Eighteen of the 30 have experience as local Councillors, one is a former special adviser, and 16 had stood previously at a general election. Indeed only four of the 30 had none of these experiences: Anthony Higginbotham (Burnley), Nick Fletcher (Don Valley), Imran Ahmad Khan (Wakefield; currently suspended from the Conservative Party) and Tom Randall (Gedling). Both Higginbotham and Randall have also stood unsuccessfully for election as local councillors for the Conservative Party.

There is nothing obvious about the make-up of the 2019 Conservative MPs that would explain why they would be more rebellious early in their parliamentary careers than previous cohorts of Conservative MPs. Perhaps if there is a cultural change in the behaviour of MPs it is the result of the huge churn in MPs in recent Parliaments rather than any change in their backgrounds.

Over 50% of Conservative MPs (and indeed, of all MPs) were first elected in 2015 or more recently. This rapid change in the composition of Parliamentary Parties may well lead to changes in institutional behaviour.

It is worth noting that it is two MPs from the 2015 cohort who have behaved in particularly unorthodox ways in the last week: firstly William Wragg called on his colleagues to report evidence of Conservative whips engaging in blackmail to the Metropolitan Police, and then Nus Ghani went to the media to accuse the government of dismissing her as a minister because of her Muslim faith. Perhaps it is the sheer volume of newer MPs that makes them so emboldened to challenge existing authorities and orthodoxies.

By Chris Butler, Lecturer in Politics at the University of Manchester.