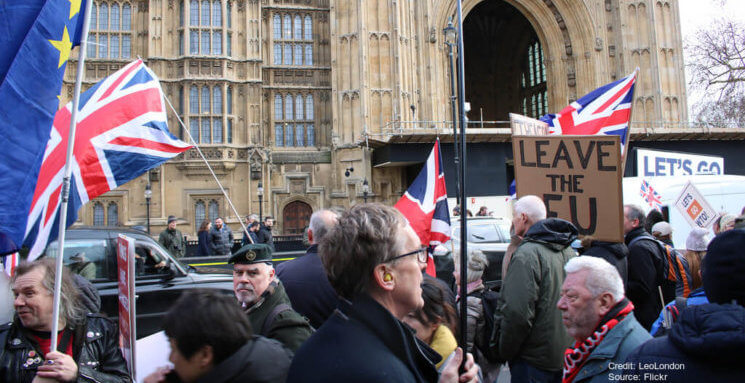 Another week, another (supposedly) round of votes in the Commons on Brexit. But with just three weeks to go until the UK’s scheduled day of departure, maybe not another week in which nothing changes. Perhaps by Friday the immediate future of Brexit at least will be a little clearer.

The Prime Minister has promised MPs up to three votes this week. On Tuesday, there should be another ‘meaningful vote’ on her deal, however amended in the wake of the negotiations that have been taking place ever since the deal was first voted down by MPs in January. The government has to win such a vote at some point before it can present the EU withdrawal treaty to Parliament for ratification.

But if, as is currently widely anticipated, the meaningful vote is lost, then MPs have been promised another vote on Wednesday on whether or not the UK should be prepared to leave the EU without a deal.

And if the Commons rejects the idea of leaving without a deal (as it has already done once before), then on Thursday the Commons has been promised it will get the chance to say whether or not it thinks that the UK should seek an extension of the Article 50 process, that is, to delay the scheduled departure date.

To complicate matters further, one or more of these days may also see votes on amendments that propose some of the widely-canvassed alternatives to the government’s current Brexit strategy, including forging a future relationship with the EU not dissimilar to that enjoyed by Norway and putting the issue to a second referendum in which voters are invited to choose between Mrs May’s deal and remaining in the EU.

We have written previously (see here, here and here) about the popularity of many of these options with voters – and for the most part there is little sign that attitudes have changed in the meantime. Mrs May’s deal still seems to be decidedly unpopular.

A Norway style Brexit has yet to capture the public imagination and is relatively unpopular among Leavers. Meanwhile, rather more people are opposed than are in favour of another ballot if it is described as a referendum in which Remain is one of the options on the ballot paper.

To date, however, we have paid less attention to public attitudes towards leaving without a deal. Given that this is one of the decisions potentially facing MPs this week, it is whether or not voters back such a step on which we will focus here.

Two principal strategies have been adopted by the polls in attempting to assess the popularity or otherwise of leaving without a deal. The first is to pit the idea against one or more alternatives, and ask voters which would be their first preference.

Inevitably, exactly how popular no deal appears to be depends in such polls on which other options are included. Even so, there is one conclusion at least that it would seem safe to draw – among Leave voters leaving without a deal is the single most popular course of action.

The relative popularity of leaving without a deal has been repeatedly demonstrated by Opinium. It has now asked its respondents on no less than nine occasions to choose between five different possible ways forward given the rejection of Mrs May’s deal by Parliament.

Each time leaving without a deal has been the single most popular option, on average securing the backing of 26%. That support comes almost entirely from those who voted Leave, as many as 47% of whom have on average identified it as their first choice.

Still, it might be objected that in practice the choice facing MPs is not so wide-raging as that canvassed by Opinium. Rather, as the Prime Minister would put it, it is in reality between deal, no deal or no Brexit.  When polls have presented voters with that choice, it is no Brexit that has emerged as the single most popular choice. However, at the same time, no deal has usually emerged as more popular than Mrs May’s deal (or indeed anything similar thereto).

The figures are remarkably similar to those obtained in response to Opinium’s more complex question. The half dozen most recent readings have put support for leaving without a deal among all voters at 28% on average. Again, most of it comes from those who voted Leave, 54% of whom on average state that it is their first choice.

Support for no deal proves to be a little higher if it is simply pitted against Mrs May’s deal. Now it stands at around a third (as it more or less does in this slightly different approach from Opinium), and is clearly the more popular option among those who voted Leave, nearly three-fifths of whom prefer it. But because most Remain voters prefer Mrs May’s deal to no deal, this still means it is the less popular option among voters as a whole.

However, it also confirms that there is a substantial minority of Leave voters are opposed to the idea, while there is little evidence that those who voted Remain might be willing to accept it. As a result, among voters as a whole opponents outnumber supporters.

YouGov, for example, have asked people on three occasions whether leaving without a deal would be a good outcome, a bad outcome or an acceptable compromise. The results have been similar each time.

This picture is largely confirmed by further polls from Sky Data and from BMG Research that simply asked voters whether they support or oppose leaving without a deal. They found 71% and 66% of Leave voters respectively in favour of no deal.

However, in both cases 18% of Leave voters were opposed, while just 15-17% of Remain supporters backed the idea. As a result, these polls also suggest that, among voters as a whole, opponents of no deal outnumber supporters.

True, rather more support for leaving without a deal is recorded if voters are asked what should happen if, as Survation have asked, ‘the EU does not change its position on the Brexit deal’, or, as ComRes have done in two slightly different ways (see here and here) ‘if the EU refuses to make any more concessions’. When the issue is addressed in this way around two in five voters or so express their support, and they may even outnumber opponents.

Trouble is, asking such a question invites respondents to express their views about how the EU have handled the negotiations (about which many voters are critical) rather than simply their view of the merits of no deal.

So, it looks as though leaving without a deal is the first preference around half or so of Leave voters and is certainly more popular among them than Mrs May’s deal. It might be acceptable to at least as many as two-thirds of Leave voters. That figure is, in fact, strikingly similar to the two-thirds of Remain voters who support holding a second referendum (while few of them are willing to consider leaving without a deal).

We thus, perhaps, should not be surprised that when voters are asked to choose between leaving without a deal and holding another ballot the two options prove to be more or less equally popular.

And it is the fact that the public are so evenly divided – and indeed polarised – between the two ‘extreme’ (and perhaps equally divisive) options in the Brexit debate that helps explain why the choice MPs are expected to have to make this week is likely to prove a difficult one.

By John Curtice, senior fellow at The UK in a Changing Europe and Professor of Politics at Strathclyde University. This piece was originally published by What UK Thinks EU.