Article 50: a fork in the road 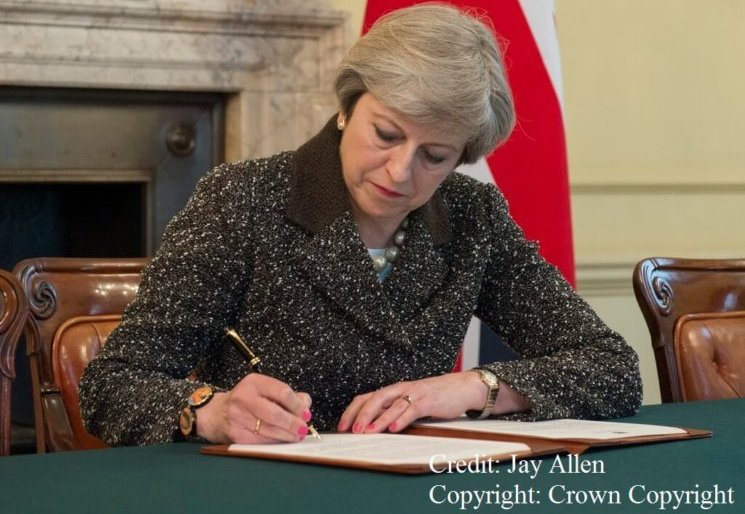 Article 50 may lead to a decisive fork in the road for the UK. The final Brexit agreement “must take account of the framework for its [the UK’s] future relationship with the EU.” Therefore, the government has two years, realistically eighteen months, to redefine our international relationships. These relationships have a direct correspondence on our economy, creating winners and losers. The government may have to choose between two very different paths.

First, let’s consider our default position at the end of Article 50. The UK is a member of the World Trade Organisation (WTO) which oversees trading arrangements and dispute settlements between its 164 member states. As a member of the EU, the UK has effectively delegated, together with other EU member states, its negotiating rights on trade and investment to the EU Commission. Whatever the EU agrees with non-EU nations, applies for all member states.

Once the UK has left the EU it needs to establish its own trade terms with its partners. The most likely event is that the UK copies (or ‘rectifies’) the EU’s current schedules of tariffs and quotas. The UK will continue to trade with the US and China, for example, on the same terms as it does currently. There may be political objections to this process from other nations, but the legal resolution process is so drawn out that these are unlikely to be an insurmountable hurdles.

In this scenario, EU imports from the UK will be treated just like those from any other non-EU country and subject to tariffs and quotas. The EU’s average effective tariff is only around 4%, but this masks considerable variation. In some sectors barriers are higher: for example, textiles, agriculture and some manufactured goods, notably cars. The impact would be unequally felt across the UK. The map below uses ONS data (unfortunately the NI data is unavailable) to show one cut of who the winners and losers might be if our exports to the EU face tariffs of 10% or more.

This is not even half the story. Services might account for less than half of the value of trade flows, but the amount of domestic profits and wages contained in our exports of services is greater than that in goods. Put bluntly, trade in services is more important than goods for the UK economy. The EU is far from a perfect market in services, but compared to all other trade relationships between independent countries, it is by far the closest to a single seamless market.

Many studies have estimated the overall impact of resorting to a WTO agreement. The National Institute of Economic and Social Research estimated in May 2016 that output will be around 3% lower over the long run compared to staying in the EU. This average costs hides the enormous and uneven distributional consequences.

To avoid this outcome, and to at least limit the costs, the obvious strategy is to strike a bespoke and comprehensive trade and investment agreement with the EU. This would preserve free trade in goods and as much regulatory equivalence with the EU as desirable. The issue is whether adequate coverage and depth can be agreed within the Article 50 time frame. The UK would not require an implementation phase, but even the Canadian deal took eight years to negotiate. Even a transitional arrangement would require agreeing the end-point.

The longer the negotiating process takes, the more likely it is that UK comes to face a fork in the road.

One path leads to accepting an amended version of the European Free Trade Agreement (EFTA). Since the UK was a founding member in 1960, this is outside of the EU. Membership would secure mostly free trade in goods, with trade arrangements for services to be negotiated on a sector-by-sector basis.

The UK would be free to strike its own trade deals around the world and choose when to adopt EU laws governing single market access. Some relaxation of the free movement of labour would be needed. But outside the EU and with our own currency there is no economic case why this is necessary (although perhaps desirable). There is already an EFTA framework and so transition arrangements would be more straight forward.

The second path is that the government opts to radically reshape the economy by choosing to set its own tariffs to zero. Campaigners say that this deliver a tax cut for consumers and a much-needed restructuring of the economy – even if to the cost of virtually eradicating our manufacturing sector. The UK would be free to set its own migration policy. The UK could even take control of its services trade, but the two biggest global standard setters are the EU and US. Even the net gains from trade are often smaller than economists like to admit (see table A.4 here).

Those who work in sectors that are currently protected would face the double-whammy of losing protection and higher tariffs with the EU. Our map shows that the areas of the UK most exposed would be northern English regions that voted for Brexit and Scotland which voted for Remain. If the geography of the Brexit vote revealed a divided society, this path may lead to deeper and perhaps even permanent divides. 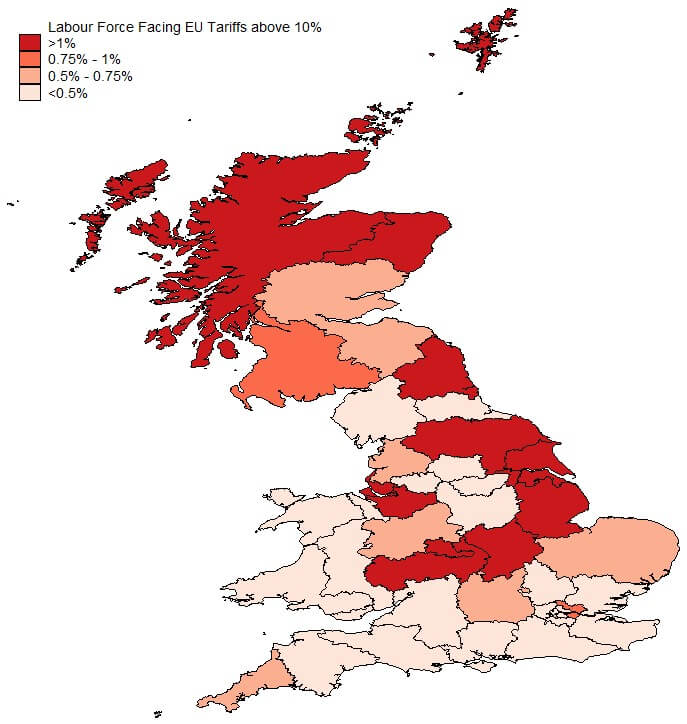 As we move through the Article 50 process the government may face two starkly different paths. This will come down to a choice that defines our foreseeable economic future. Both satisfy the will of the people by delivering Brexit. In an ideal world it would be for the electorate to decide for the outcome to have political legitimacy and social cohesion.

By Dr Angus Armstrong, senior fellow at The UK in a Changing Europe.