After a fairly tame set of questions to Brexit minister David Davis in the House of Commons, the European Union (Notification of Withdrawal) Bill has finally been published.

This follows a Supreme Court ruling that Prime Minister Theresa May cannot trigger Article 50 to begin Brexit negotiations without first seeking the consent of parliament.

Government generally has the upper hand in parliament when it comes to legislation. But it has found itself somewhat exposed with this bill, due to conflicting priorities.

On the one hand, May and her ministers have consistently taken the line that parliament should play only a minimal role in the Article 50 process: even the recent concession of a parliamentary vote on the final deal was less than it seemed, given that it will be a choice between a deal that parliament didn’t like and no deal at all.

On the other, May has also staked a good deal of her credibility on triggering Article 50 by the end of March. Her firmness on this is shaped strongly by the degree to which her party is willing to give her some room for manoeuvre in organising Brexit, without letting the schedule slip any further. These conflicting priorities mean that the government will have to tread a very fine line.

There will be two days allocated to the second reading debate – which will focus on the general principle of the bill (that of notification to withdraw from the EU). This is important for the House of Commons, which will sit until midnight on one of the debate days. But it won’t be of too much concern to the government. Although there will be a vote at the end of the debate, the government is unlikely to lose.

MPs will then have three days to try to amend the bill during its committee stage. Given the importance of this issue, it will take place on the floor of the house. As such, a large number of amendments are undoubtedly on the way – from Labour, the SNP, the Liberal Democrats and maybe even Tory rebels. The SNP has already said it has 50 amendments “ready to go”. These committee stages are usually hectic, with very large groups of amendments being debated at the same time.

The Commons may well give the government a tough time here. It could try to force either changes to the bill or concessions for the negotiation to come. It might, for example, demand that parliament should be both briefed and involved in the Article 50 process post-notification. But that all depends on whether or not MPs can carefully weave this into their amendments to the bill so that they are selected for debate.

The more daunting challenge is the House of Lords. The government can dominate the House of Commons but it doesn’t have a majority in the upper house. That means it has no control over the timetable for the consideration of the bill, so peers could make the debate last much longer than the government would like, potentially going well beyond the March deadline. It is here more than ever that the government may have to make a judgement on avoiding getting bogged down in debate versus making concessions to MPs or peers that might come back to haunt ministers further in the process of negotiation.

May has already nullified one line of attack by promising to produce a white paper on her Brexit plan. Apart from the immediate pleasure of discombobulating Jeremy Corbyn at prime minister’s questions and forcing the opposition parties to delete some of their draft amendments to the bill, this concession looks relatively low-cost. A white paper need not commit the government to any particular line in negotiations and it simultaneously makes it harder for rebels to portray May as completely unaccommodating.

The real fight on Brexit will not be on notification itself taking place, but scrutiny of the process of negotiation thereafter. The tight wording of the Article 50 bill is intended to stymie any efforts to add in amendments to the effect that parliament should have a full and continuing role in Brexit negotiations. 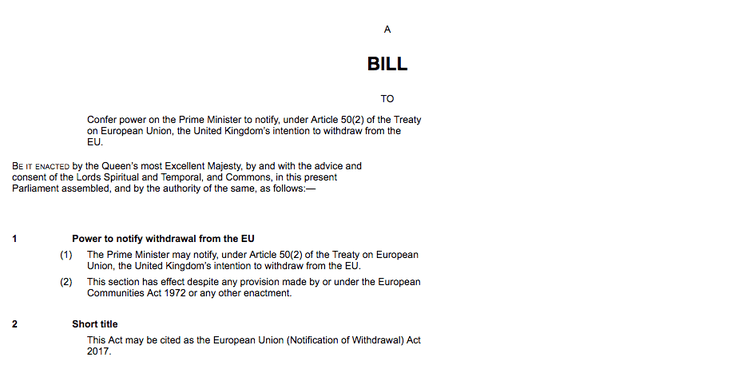 That bill in full.

There was much speculation about its length of the bill (one line or three?) and whether or not it would be “bomb proof” or unamendable. The published bill is only 133 words and has only two clauses. As expected, it is very tightly framed, focusing only on the notification of the intention to withdraw from the EU. This should limit the number of amendments that can be made, since each has to be within the scope of the bill.

Deputy Speaker Lindsay Hoyle, who will chair the bill’s committee stage, will have full discretion over which amendments make it through to debate. So it remains to be seen just how bomb-proof this bill actually is over the next couple of weeks, but much will hinge on whether there is a clear legal separation between notification and negotiation. If MPs can tag amendments relating to the future negotiations onto the bill, it could open the floodgates and put the government under enormous pressure to clarify its plans for Brexit and to give parliament a stronger role.