Article 50 one year on: the UK economy – initial evidence 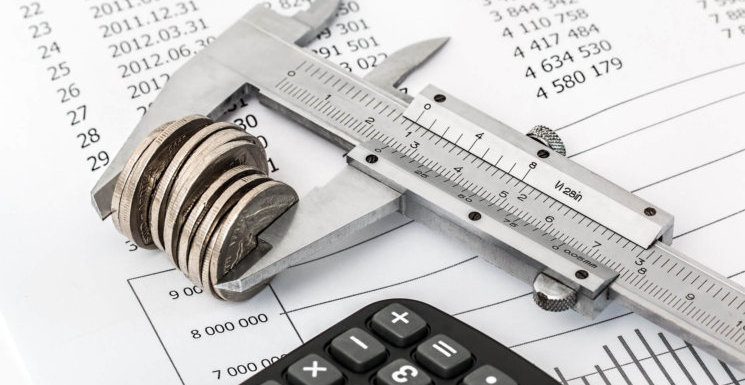 The full economic impacts of Brexit will not materialise for many years. But 21 months after the UK voted to leave the EU, we can assess how the Brexit vote has begun to affect the British economy.

Even though the UK remains in the EU, the vote has already had economic impacts. Economic behaviour depends not only on what is happening now, but what people and businesses expect to happen in the future. The referendum changed expectations about the future of the UK’s economic relations with the EU and the rest of the world.

There are two parts to this. First, uncertainty has increased. Even now, it remains unclear what exactly the UK’s relationship with the EU will look like after Brexit and how policymaking in the UK will change.

Second, Brexit is likely to make the UK less open to trade, investment and immigration with the EU. Even before Brexit happens, this could make the UK a less attractive destination for foreign investment and reduce the incentive for businesses to invest in expanding UK-EU trade.

The most immediate impact of the Brexit vote was on financial markets. The day after the referendum, the FTSE 100 stock index fell by 3.8% and the value of the pound fell sharply. Researchers at University College Dublin have studied stock price movements in the days following the referendum and found that companies with greater exposure to the UK and EU markets suffered larger share price falls than businesses with a more global focus. This finding suggests investors expected the consequences of the Leave vote to be particularly severe for firms whose operations straddled the UK-EU border.

But the stock market downturn was short-lived. The Bank of England responded to the vote in August 2016 by cutting interest rates by one-quarter of a percentage point and increasing the money supply through quantitative easing. However, the fall in the value of sterling was persistent.

Between 23 and 27 June 2016, sterling declined by 11% against the US dollar and 8% against the euro, and it has remained around 10% below its pre-referendum value ever since. This suggests that financial markets have lowered their expectations for future UK economic performance.

A fall in the pound increases the cost of imports into the UK but also makes UK exports to other countries cheaper. More expensive imports drive up the cost of living. Indeed, Consumer Price Index (CPI) inflation has risen dramatically since the referendum: from 0.4% in June 2016 to 3% in January 2018.

It would be a mistake to attribute this entire increase to Brexit though. Inflation has also increased in the US and the euro area over the same period, so we need to distinguish the impact of the Brexit vote from other factors that affect inflation, such as oil price movements and cost increases resulting from faster growth in the global economy.

Our team at the Centre for Economic Performance has studied how price increases since the referendum differ between products depending on how much of what we buy is imported. For tradeable goods, such as fruit, wine and clothing, we import much of what we consume, but that is much less the case for services like restaurants and hotels.

So if the Brexit-induced fall in the pound is responsible for higher inflation, we would expect products where imports are more important to experience bigger
price rises. And this is exactly what the data show. Figure 1 shows inflation before and after the referendum for two groups of products: the top half of products and the bottom half in terms of imports.

Following the referendum there was a rapid increase in inflation for the high import group, while the rise in inflation was much slower for the low import group. This demonstrates that the depreciation of sterling did indeed lead to higher inflation.

After disentangling the effect of higher import costs from other factors that affect prices, we estimate the Brexit vote increased inflation by 1.7 percentage points in the year following the referendum. It would be wise to view the precise size of this effect with some caution, but the increase is undoubtedly substantial.

A rise in inflation does not necessarily make consumers worse off if it is accompanied by higher incomes. But, as shown in Figure 2, nominal wage growth has not risen since the referendum.

Consequently, higher inflation has led to a decline in the real value of wages and a fall in living standards. Our estimates imply that, by June 2017, the vote to leave the EU was costing the average UK household £404 per year.

But has the depreciation of sterling had any positive economic effects? By making UK exports cheaper, the fall in the pound gives British firms a competitive advantage in foreign markets, which could, in theory, lead to higher exports.

However, at the same time, the likelihood of future increases in trade barriers between the UK and the EU may make firms reluctant to invest in increasing their export capacity. And for firms with global supply chains the fall in sterling also raises import costs, mitigating the competitive advantage of the depreciation.

When sterling declines, the value of Britain’s imports and exports measured in pounds automatically rises. But this does not mean the volume of trade has increased, and, so far, there is no evidence that it has. 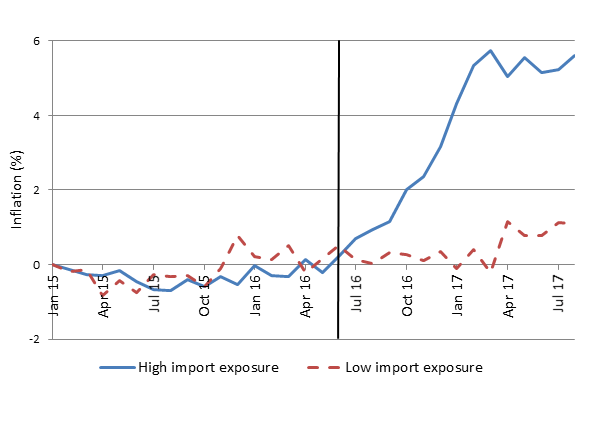 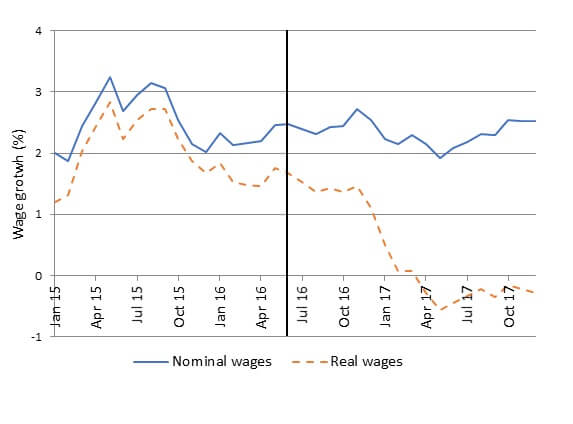 However, trade flows are usually slow to adjust to exchange-rate movements, so it will probably be another year or two before we know whether the fall in sterling has boosted exports.

We can also look at the overall impact of the referendum on economic growth. Figure 3 shows GDP growth in the UK compared to the six other members of the G7 group of advanced economies.

In the year prior to the vote, UK growth was 0.6 percentage points higher than the average for other G7 members, while in 2017 it was 0.9 percentage points lower. This is a crude comparison but does suggest that the referendum result reduced UK growth.

A more sophisticated version of this same approach has been conducted by academics from the universities of Bonn, Oxford and Tübingen. They construct a control group of countries whose average growth exactly matches UK growth prior to the Brexit vote and then compare GDP growth in the UK and the control group following the referendum. They conclude that by the third quarter of 2017 UK GDP was approximately 1.3 percentage points lower than it would have been if the UK had not voted for Brexit.

This implies a decrease in output of approximately £500 million per week during the quarter. Prior to the referendum, there was a broad consensus among economists that leaving the EU would, in the long run, reduce UK living standards.

It is too soon to evaluate the accuracy of these forecasts and as time passes we will learn much more about how the Brexit vote has affected the UK economy. But even before Brexit occurs, the evidence on inflation, wages and output already shows that Britain is paying an economic price for voting to leave the EU. 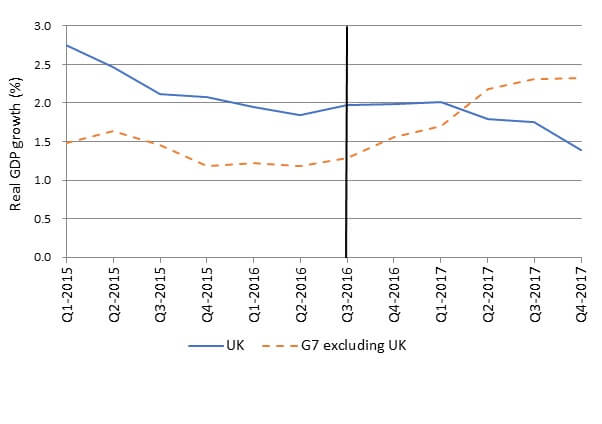 By Dr Thomas Sampson, Brexit research leader at The UK in a Changing Europe. This piece originally featured in the Article 50 one year on report.