Back in June 2020, I wrote a piece for this site looking at net migration figures as they then stood. It included this assessment:

“Immigration and emigration have undoubtedly fallen sharply, and, as the Covid-19 crisis plays out, it would be no surprise if net migration were to become negative, with long-term residents in the UK returning for family or health reasons to their countries of origin.

It is ironic that, not long after the government formally abandoned David Cameron’s ill-fated 2010 target to reduce migration to the “tens of thousands”, the target has almost certainly now been hit, albeit only as the by-product of a global pandemic.”

Today’s ONS figures, which estimate that net migration was indeed negative, by about 50,000, in the second quarter of 2020 – when the above passage was written – show this assessment was accurate.  We should not place too much weight on the exact numbers.

They come not from the International Passenger Survey, which has not been operating throughout the pandemic, but from a complex modelling exercise which incorporates some genuinely heroic assumptions about how people behaved as the pandemic took hold in the early months of last year.  It is, at best, an informed guess.

Full disclosure: I, along with other external experts, was consulted by ONS on the methodology they used and endorsed this approach, but everyone involved is fully aware of its limitations.

The ONS figures also show that this was entirely driven by EU nationals, with net migration by both non-EU nationals and UK nationals close to zero.

In qualitative terms, then, this is consistent with the recent ONS publication showing that the number of EU nationals in employment fell by about 70,000 in the year to 2020Q2, although not everyone who will have left employment will have left the country and vice versa.

What does this tell us about population change over the past year and in particular whether the UK has indeed seen a significant fall in its population?  The ONS has not yet made any attempt to estimate net migration for the rest of 2020.

Instead, its separate publication includes some scenarios, with net migration for the remainder of 2020 running between 200,000 and minus 200,000, but these are purely illustrative.

In my view, the continued fall in the number of EU nationals in employment – which fell by a further 130,000 in the second half of 2020 – is likely to be reflected in further net emigration during that period, so the negative numbers are much more plausible.

But today’s statistics don’t shed much further light on this. It does now seem likely that estimates based on the published Labour Force Survey data (such as ours here) overstated the fall, especially among non-EU nationals; but as I argued in February, “while the fall in the non-UK born population is clearly not a blip or a statistical artefact, its magnitude is highly uncertain.”

And it’s not just what has happened during the pandemic that is uncertain, but in the years leading up to it.  It is now more than five years since I (with Michael O’Connor) first noticed the very sharp divergence between the official immigration statistics and the number of National Insurance registrations by EU nationals, particularly those originating from Bulgaria and Romania, suggesting that the former were significant underestimates.

These doubts were confirmed by the government’s Settled Status scheme for EU citizens resident in the UK on or before January 1 of this year.

Separate statistics, published yesterday, suggest that about 4.5 million applications from EU citizens have already been approved and the scheme remains open; this compares to the LFS-based estimate that 3.4 million people would be eligible.

The discrepancies for individual countries are much larger; well over 700,000 Romanians have been granted status, although the ONS estimates that there are only about 400,000 in the country. While you wouldn’t necessarily expect an exact match, this is an astonishingly large divergence.

ONS’s publication today of estimates of migration based on administrative data – linked to the National Insurance number registration data I mentioned above – is very welcome, and goes some way towards solving this mystery.

It confirms that the migration statistics underestimated EU migration (and overestimated non-EU migration) for a considerable period, especially from Romania and Bulgaria.

Likewise, just at the migration statistics failed to register the full impact of the influx, the population statistics, based on the LFS, didn’t pick up the resulting changes to the resident population.  The chart below goes a long way to explaining the settled status statistics. 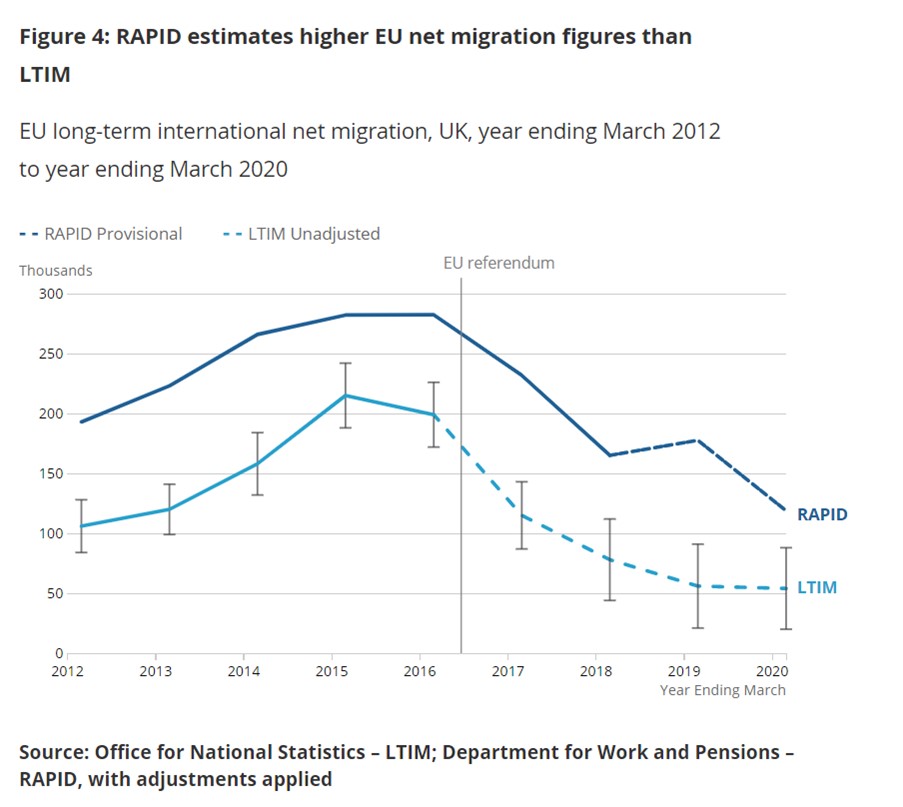 So where does this leave us?  We know that there were probably considerably more Europeans here than we thought a year ago, but also that a significant number have since left.

We know also that the migration and population statistics understated the growth, and perhaps overstated the fall.

Today’s analysis, while far from definitive, tells us more about the past: the Census will, we hope, shed some light on where we are now; but huge uncertainty remains about the future.

By Jonathan Portes, Senior Fellow at the UK in a Changing Europe.