Attitudes in Great Britain to Northern Ireland and Brexit 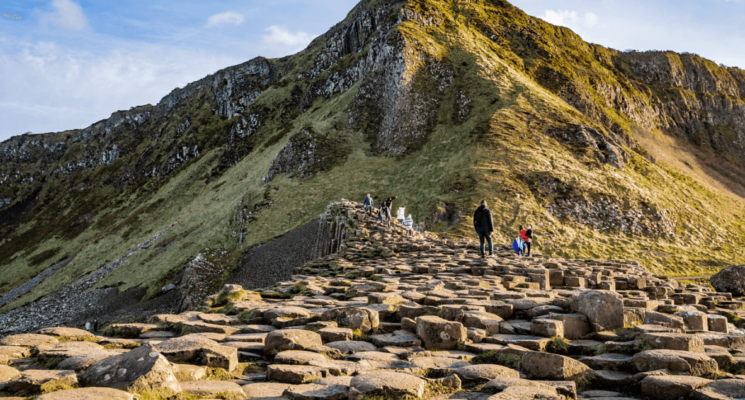 The position and future of Northern Ireland have been unusually prominent in UK politics over the last couple of years. The Democratic Unionist Party’s 10 MPs hold the balance of power in the House of Commons. Finding a way of preventing a hard border in Ireland without compromising Northern Ireland’s status as part of the UK has been one of the government’s main objectives in negotiating Brexit, and has led to the issue of the backstop, which is now arguably the biggest obstacle to further progress.

But if the future shape of the UK’s relationship with Europe is being driven by the needs of Northern Ireland, what do the public in the rest of the UK think? Do they value the Union? And do they think Brexit will be good or bad for their compatriots on the other side of the Irish Sea?

Every year, Ipsos MORI conducts a short opinion poll on current issues for the Polling Club at King’s College London. The members of the club are students, both undergraduate and postgraduate and studying a range of different subjects, and under my direction they get hands-on experience designing the survey and then analysing the results. They choose the topics to be researched, and this year they decided to include some questions exploring public attitudes to Northern Ireland and Brexit in England, Scotland and Wales.

Our survey found that the British public’s attachment to Northern Ireland is weaker than is perhaps sometimes supposed. Only just over a third of the public in Great Britain, 36%, hope that Northern Ireland would vote to remain in the United Kingdom if it were to hold a referendum on its future; half as many, 18%, would prefer it to leave and join the Republic of Ireland, but the rest say they do not mind either way, or don’t know. 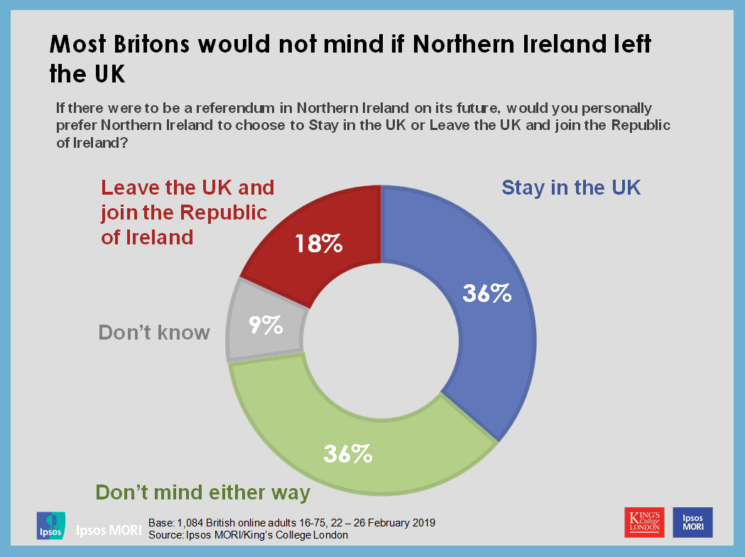 Those who would vote Conservative are more likely to hope that Northern Ireland would opt to stay in the UK than supporters of other parties: 51% of Conservatives choose this option, compared to 35% of Labour supporters and 31% of Liberal Democrats; but 31% of Tories don’t mind either way, and 13% would prefer a united Ireland. It is no surprise that a Conservative government is committed to maintaining the Union, but perhaps even the party’s leaders do not fully realise that only half of their supporters take the same view.

Meanwhile, only one in five Labour supporters, 19%, say they would like Northern Ireland to join the Republic even though that has long been a policy of the left and one that Jeremy Corbyn has personally supported. Attitudes to Ireland have importance in the history of the identities and policies of both major parties, but are not issues that define the political loyalties of most voters.

It is interesting to compare the public’s view of Northern Ireland to what they said about Scotland at the time of the independence referendum in 2014. When a 2014 Populus poll asked how they hoped Scotland would vote, nearly as many, 15% of people in England and Wales, preferred a vote to leave; but a clear majority, 55%, hoped Scots would choose to stay in the UK. More of them, it seems, think of Scotland as being an integral part of their country that they would be sorry to lose than take the same view of Northern Ireland, but it is not that many more of the rest would actively like to be rid of Ulster, just that rather fewer feel strongly about keeping it.

We also found that more people expect Brexit to have a damaging effect on both sides of the Irish border than expect a beneficial one, although many think it will make no difference or have no opinion at all on the issue. Two in five (39%) predict a negative effect on the Northern Irish economy over the next ten years or so, with 10% saying the effect will be positive.

Naturally enough, supporters of Brexit are more optimistic about its effects than are opponents. Those who voted for Britain to leave the EU in the 2016 referendum split 18% to 15% in favour of its improving Northern Ireland’s economy, with 44% believing it will make no difference either way. By contrast, three in five Remain voters (62%) say the effect will be negative and only one in five that it will make no difference (15%) or have a positive impact (4%).

One in five Leave voters (19%) and two in five Remain voters (41%) think that Brexit will make it more likely that Northern Ireland will quit the UK in the near future. Yet it is Remain supporters who are more likely to be happy if that were to happen: 23% of Remainers, but only 15% of Leavers, would prefer Northern Ireland to choose to be in a United Ireland if a referendum were held.

(Technical note: Ipsos MORI interviewed a representative quota sample of 1,084 adults aged 16-75 across Great Britain, online, on 22-26 February 2019. Data are weighted to the known profile of the British population in this age range. Full question wording and other details can be found here.)