What does the Northern Irish public think about the Protocol? 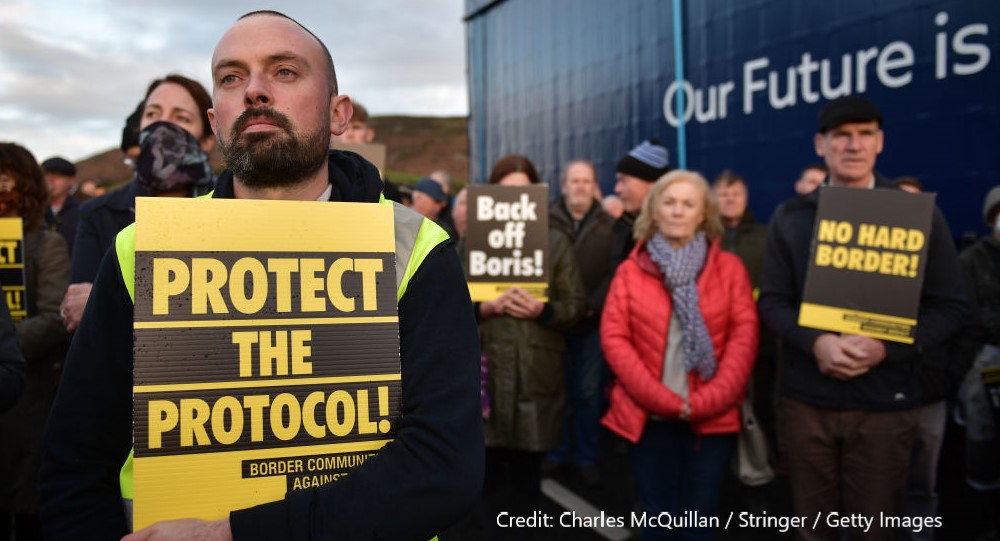 We found notable consistency from our representative sample on some of the most fundamental questions. Unsurprisingly, given the 56% vote to Remain in the 2016 referendum, a majority of our respondents continue to hold a negative view of Brexit and expressed concern about the real and potential impact of Brexit and the Protocol on Northern Ireland economically, politically, and constitutionally. Meanwhile, a consistent two-thirds of our respondents have held the view that Northern Ireland does need arrangements particular to it to manage the effects of Brexit.

On the nature of the impact of the Protocol itself, however, we have seen some change over the course of the year. Initially voters were evenly split on whether the Protocol and its dedicated arrangements for Northern Ireland are ‘a good thing’ (43% agreeing versus 44% disagreeing). By the third poll in October, opinion had shifted: with a narrow majority (52%) agreeing the Protocol was ‘a good thing’, with 41% disagreeing. 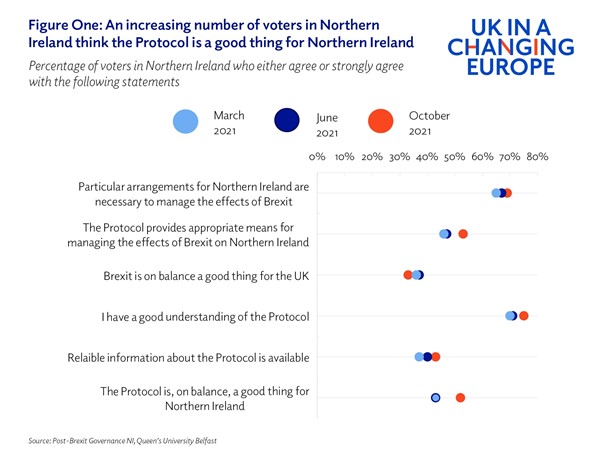 A similar shift occurred in how voters want members of the Northern Ireland Assembly (MLAs) to cast their ballot in the ‘democratic consent vote’ due to be held in late 2024 on the continued application of the Protocol’s core provisions, most specifically on the controls on goods moving from Great Britain into Northern Ireland. Polling in March and June 2021 saw initial support for the Protocol narrow to an even split (45%:46%) before widening in October to a narrow majority (51%) wanting MLAs to vote for the Protocol’s continued application, compared to 41% against.

In general, according to our polling data, voters’ views of the Protocol were broadly less negative at the end of 2021 compared to the start of it. The March poll found that more than two-thirds of respondents saw the Protocol as having a negative impact on Northern Ireland’s constitutional position in the UK and its place in the UK internal market. By October, the majorities had declined to 57% and 51% respectively.

As to the impact of the Protocol on the Northern Ireland economy, whereas initially only 33% viewed the impact as positive, by October the figure had risen to 51% — although this was against a backdrop of extended grace periods on the implementation of the Protocol and supply disruptions in Great Britain that were not being seen in Northern Ireland.

Positive assessments of the Protocol also outweighed negative ones in the October poll regarding its role in protecting the 1998 Belfast (Good Friday) Agreement and north–south cooperation on the island of Ireland. However, the proportion of our sample who hold negative views on the impact of the Protocol in these areas remains considerable — a reminder that this is a topic over which people in Northern Ireland are politically divided.

What are the political implications of attitudes to the Northern Ireland Protocol?

When we look more closely at the poll responses, we see an interesting pattern that helps explain why the divisions over the Protocol are so acute. By and large, if people opposed Brexit, they support the Protocol. The most significant variable in determining people’s views on the Protocol is whether they were a Leave or a Remain voter.

This is reflected in political affiliation too (see also the chapter by Jon Tonge in this volume). In the 2016 referendum, a majority of unionists supported Leave, with those who consider themselves to be ‘strongly’ unionist particularly supportive. A large majority of nationalists and those who are non-aligned (i.e., neither unionist nor nationalist) supported Remain. Our polling on the Protocol broadly mirrors this pattern. 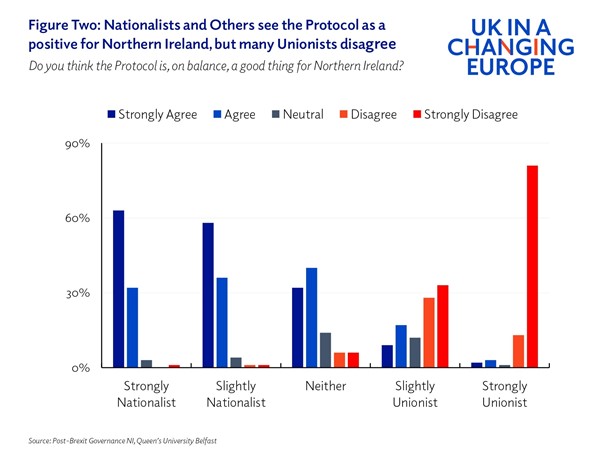 These polls were conducted in a social context in which the Protocol as a topic has gathered a great deal of political and popular attention. However, the consequences of the Protocol — or, indeed, Brexit — have not yet been fully felt because of the grace periods that were in place over the course of 2021. The matter of how to minimise the negative impact of the full gamut of rules and requirements applying to goods moving from Great Britain into Northern Ireland is the focus of the current talks (presently suspended in the run-up to the Assembly elections) between the UK and EU officials, under the leadership of Vice-President Maroš Šefčovič and the current Foreign Secretary, Liz Truss.

Our polling shows that the issues of most concern to people in Northern Ireland are the supply of medicines, customs controls, and Northern Ireland having a ‘voice’ in the governance of the Protocol. These are tricky issues to address and any solution is likely to involve compromise and complexity.

Whether 2022 sees public opinion continue to warm towards the Protocol or move sharply in the opposite direction depends a great deal on the outcome of these talks. However, there seems to be increasing doubt over the prospects for the talks themselves. How the British government reacts to the results of the Assembly elections being held today (5 May) could well make or break the chance for a negotiated and agreed outcome.