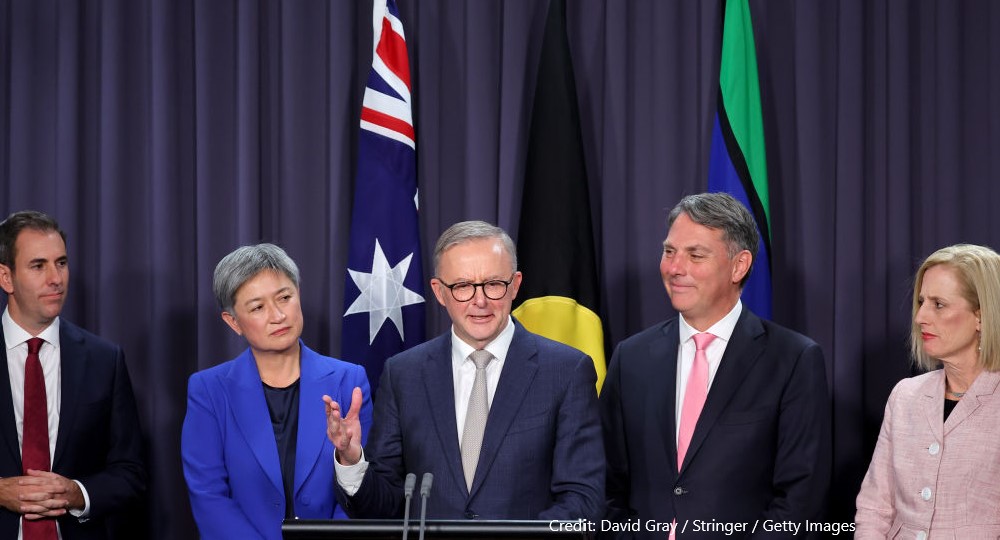 Initial results of the Australian federal election have prompted widespread claims of the decline and demise of the ‘two-party system’. This shift has been ostensibly caused by the success of the Australian Greens and a large cohort of local independent candidates.

Certainly, the election of what is likely to be three or four Greens to the House of Representatives, and another six (adding to an existing six elected in 2019) to the Senate marks an unparalleled level of representation at the federal level. Likewise, the election of teal independents backed by the crowdfunded ‘Climate 200’ initiative, alongside independents from ethnically-diverse metropolitan and regional electoral divisions, make for a lower house crossbench of greater than double the size previously seen.

Yet to speak of the demise of the two-party system mischaracterises the nature of politics in Australia prior to Saturday’s Australian federal election. The label ‘two-party system’ has not accurately encapsulated the dynamics of Australian party competition for some time. Yes, the share of ‘first preference’ votes for the major parties, Labor and the Liberal-National coalition, is at an historic low. But this election merely reflects a breakthrough into the House of Representatives of well-established multiparty dynamics present elsewhere in the electoral and legislative arenas of federal politics. Fragmentation may have increased, but it is not new.

And this fragmentation is yet to alter the core of the party system – government formation. At the time of writing, Labor appears likely to command a (slim) majority in the House.

Of course, there is more to a party system than government formation and the number of parties. Important, too, are the nature of parties and their interactions, and the extent to which the rising number of minor and independent representatives might constrain the behaviour of the parties of government.

Labor now occupies the executive benches on the back of a 33% national primary vote, buoyed to majority ‘two-party preferred’ support in large part from the subsequent ballot preferences of Greens voters. This will constrain its policy positioning. Indeed, the Greens’ greatest electoral success has emerged predominantly, though not exclusively, in seats historically held by Labor in capital cities.

The Liberals now, too, have lost several of its ‘blue ribbon’ seats in affluent areas of Melbourne and Sydney. These are seats of strategic and symbolic value, sources of prior prime ministers, senior ministers and other prominent party figures, as well as sites of significant fundraising. What’s more, the Liberals have lost these seats to high-achieving women campaigning on climate action, gender equality, and greater integrity in politics – all areas where the Morrison-led Coalition government deliberately failed to act.

In past years, these women may well have been leading, valued members of the Liberals, rather than the clearest reflection of the party’s careening toward a reactionary style of conservatism at odds with the views of the ‘moral middle class’ that was once its core constituency.

Both major parties face an ideological, electoral, and identity crisis. But again, this is not new, just more plainly evident. Both Labor and Liberals can take some reassurance from the comparatively unusual, albeit weakening, loyalties of Australian voters to their parties over the long-term. It will likely take more than one election to break these psychological and emotional affinities and fully upend past voting tendencies.

Second, Labor and Liberal have a common interest in reasserting two-party dominance, in rhetoric as well as in electoral and parliamentary strategy. These major parties are not just bystanders to shifts in party competition, but have considerable capacity to shape the party system. Australia’s multipartism, after all, is an especially contingent one. The influence of crossbench Senators over legislative outcomes, for instance, relies on the Government and Opposition at odds; in any given parliament, however, the two regularly vote in unison.

Third, the electoral volatility that delivered seats to minor parties and independents could feasibly return these seats to the major parties in subsequent elections. See, for instance, the seat of Wentworth in Sydney, which has vacillated between independent and Liberal MPs in recent years.

However, regaining what’s been lost in this election will require both major parties to reckon with their respective strategic challenges. The likely elevation of arch-conservative Peter Dutton as the new Liberal leader, and Labor’s refusal to negotiate with the Greens on climate targets, suggests such reflection is unlikely. That Labor might resist greater ambition on climate targets seems particularly ill-advised following what appears as Australia’s long-overdue ‘climate election’.

Yet for the Greens, while increased public concern over climate change undoubtedly contributed to the party’s record increase in representation, it is not the full explanation. In Queensland, where the Greens made their greatest gains, the party has engaged in a years-long process of community organising and establishing mutual aid networks.

The Greens’ campaign in the Australian federal election for the seat of Griffith in Brisbane involved doorknocking 90,000 homes, and providing community assistance and aid packages to residents struggling through floods. This is a field campaign of unprecedented scale.

The success of such a platform, occupying issue space arguably abandoned by the Australian Labor Party, shows that Australians’ interest in social democracy – one that incorporates significant climate action – wasn’t dead, but maybe just resting. How Labor responds will be a key determinant in how party system change continues to unfold in Australia.

By Josh Holloway, Research Associate in the College of Business, Government and Law at Flinders University, Australia.