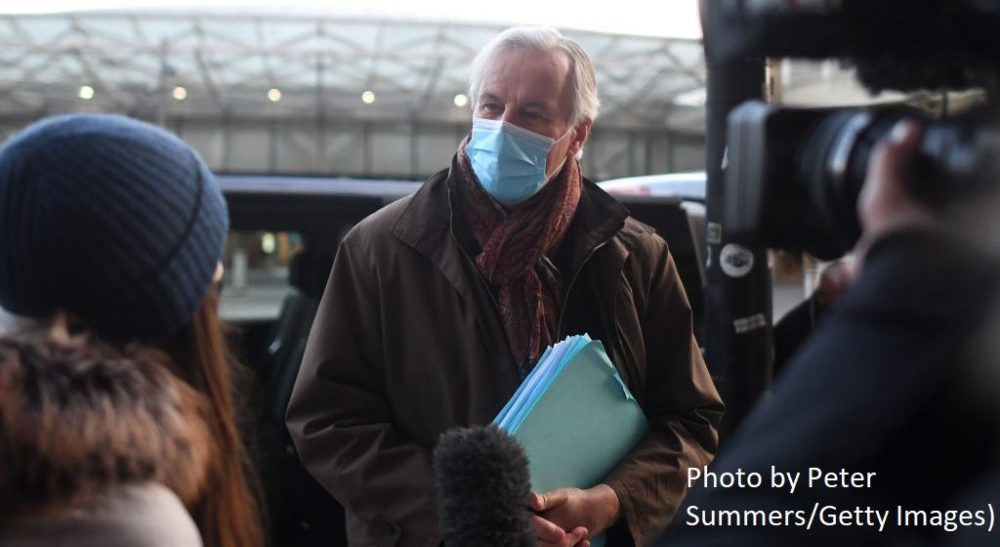 Like many of the arguments around Brexit, those about the EU’s negotiating mandate never seem to go away.

On December 8, Paul Goodman reported on this site that the idea was still floating around among Conservative MPs that the EU mandate needed to change to advance negotiations. If only Michel Barnier wasn’t so hamstrung by an unrealistic set of negotiating instructions, the argument goes, real progress could be made.

It is true that the EU mandate makes some demanding asks of the UK. On government subsidies, for instance, it says “The envisaged partnership should ensure the application of Union State aid rules to and in the United Kingdom.”

In other words, EU rules on subsidies should apply in the UK in future and, by extension, the European Court of Justice would need to adjudicate those rules.

On fisheries, too, the EU mandate is uncompromising. It says, “the provisions on fisheries should uphold existing reciprocal access conditions, quota shares and the traditional activity of the Union fleet”.

It argues that, basically, nothing should change when it comes to fish. EU boats should get the same access and quota as now.

On so-called level playing field issues, the EU mandate, again, demands EU rules be followed in future. It says, “the envisaged agreement should uphold common high standards, and corresponding high standards over time with Union standards as a reference point”.

This would apply to a swathe of areas, including labour and environmental standards. The UK and EU would keep in lockstep on these issues over time according to how EU rules developed.

Looking at all this, you might reasonably conclude that such a mandate was incompatible with anything the UK could agree to.

It could never agree to follow EU subsidy rules, accept the status quo for fish or promise to keep in lockstep with EU rules on level-playing field standards.

With negotiations now entering their tenth month, and seemingly little prospect of a solution on these issues, surely Barnier should go back to EU governments and ask for a more flexible mandate. Shouldn’t he?

Put simply, no. The fixation on the EU’s negotiating mandate is a red herring.

There are at least four reasons why. First, because it’s not necessary. EU negotiators have already moved away from the EU mandate in crucial areas.

They are no longer demanding the UK follow EU state aid rules and they accept that the status quo on fish will not continue.

That doesn’t mean these issues have been solved, but it shows that the mandate is far from gospel and plenty flexible already.

Second, because it’s not necessary. EU governments are the ones that gave Barnier his negotiating instructions and it is they who would sign off on any deal.

They can decide to make compromises not foreseen in the mandate and even contradict it if they wish because they wrote it.

EU governments are not about to sanction themselves for having accepted a deal on different terms to the original mandate.

Third, even if the EU were to try and draw up a new negotiating mandate now, it is such a complex process – involving 27 different governments, each with their own competing interests – there is simply no time to do so.

These things take months of internal debate and discussion. Trying to do so mid-negotiation is a recipe for undoing lots of what has already been agreed and going backwards.

EU negotiators and member states are in constant contact at this stage in the talks anyway. If Barnier is not moving, it is because he is being told not to, not simply because of his interpretation of the mandate.

Equally, if he is given the green light to move, he will, even if that goes against parts of his original mandate.

It is not completely unheard of for EU negotiating mandates to be changed. For instance, in the EU’s talks with the US, it adopted a new, more limited mandate in 2019 following the failure of the TTIP negotiations.

This was because of “difficulties in negotiating mutually acceptable commitments in areas identified as priorities by the Union”, necessitating “a more limited agreement”.

Note, though, that the EU did not change its mandate mid-negotiation with the US. It did so once those talks had failed to advance a much more limited agenda.

Fourth, given all that, the EU has no reason to want to change its mandate. Such a move would be tantamount recognition that the initial mandate was a mistake. That would weaken its position in negotiations.

Part of the EU’s posture in these talks has been that it is monotonously consistent in its principles and demands. Changing this now would undermine that completely.

The UK itself would not dream of changing its formal negotiating objectives at such a crucial point in the talks. Why would the EU?

One of the reasons politicians in the UK may be so keen to focus on the EU mandate is partly the blame game.

If talks fail, it can be pinned on the EU for not being flexible enough in its negotiating instructions. That would be the wrong conclusion.

Ultimately, the EU mandate does not prevent a deal being reached and does not need to be changed to do so. The same goes for the UK’s negotiating objectives.

They are a guide for negotiations – and very important – but not a script. Indeed, the EU mandate has already been diverged from in fundamental ways, on state aid and fisheries.

There would be many explanations for no deal if it happened – either side’s negotiating objectives is not one of them.

By Matt Bevington, public policy researcher at the UK in a Changing Europe. This piece originally featured in ConservativeHome.