Battle for the third seat: Northern Ireland and the European elections

If one thing’s for certain in the European elections on 23 May, the Brexit Party won’t be making any inroads in Northern Ireland. It’s the only constituency of the UK where it isn’t fielding any candidates, and not without reason. Northern Ireland has its own distinct party system, where ethno-national ideology has historically been the main dimension of electoral competition. But even in Northern Ireland, the salience of Brexit has the potential to shake up the current configuration of the region’s representation in the European Parliament.

For context, this configuration has been remarkably stable since the first election to the European Parliament in 1979. The Democratic Unionist Party (DUP) and Ulster Unionist Party (UUP) have each held one of Northern Ireland’s three seats throughout this period. The Social Democratic and Labour Party (SDLP) held a seat until 2004, until Sinn Féin displaced it as the main nationalist party.

Sinn Féin and the DUP are well placed to hold their respective seats, but the UUP is in a vulnerable position. Its incumbent MEP, Jim Nicholson, is retiring after serving in the European Parliament for three decades. After a disappointing set of local election results earlier in the month, its candidate, Danny Kennedy, faces an uphill struggle.

Part of UUP’s difficulty lies in the similarity of its Brexit position to that of the DUP. Having campaigned to leave the EU in 2016, the DUP’s message is to ‘defend the Union and deliver Brexit’. It insists that the UK must leave the EU and, crucially, that Northern Ireland exits on the same terms as Great Britain. For the DUP – and many unionist voters – the backstop continues to be an unpalatable aspect of the Withdrawal Agreement.

While the UUP campaigned to remain in the EU in the 2016 referendum (albeit half-heartedly), it swiftly called for the result to be implemented and, like the DUP, it sees the backstop as a long-term threat to Northern Ireland’s position in the UK. And, also like the DUP, it has not advocated a softer kind of Brexit on a UK-wide basis, such as continued membership of the single market and/or customs union, and it is opposed to a second referendum.

Considering that a majority of voters in Northern Ireland supported Remain in 2016, and with recent survey evidence finding that an even larger majority support the main features of the backstop, it would be more surprising than not if a majority of Northern Ireland’s three MEPs were to be elected on a pro-Leave, anti-backstop platform – especially under a proportional electoral system.

However, not only is Northern Ireland’s electoral system for European Parliament elections proportional; it is also preferential. Under the Single Transferable Vote (STV) system, voters rank candidates in their order of preference (1, 2, 3 etc.). If a candidate reaches the quota based on first preferences alone (in this case 25% + 1 of the total number of valid votes cast), he or she is elected after the first stage of counting.

Candidates who fail to reach the quota on the first count will depend on transfers to get elected – either from the surplus votes of a candidate who exceeds the quota, or from the votes of the least popular candidates who are eliminated. In both cases, voters’ second (and third, and fourth, and so on) preferences are transferred until all three seats are filled. 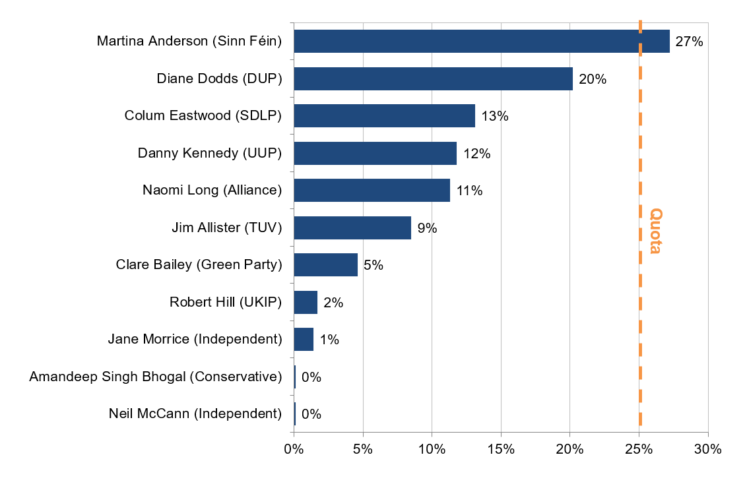 In a recent poll conducted by LucidTalk, 27% of respondents said they would vote for Sinn Féin as their first preference (as shown in Figure 1 above). If this were to be replicated on 23rd May, it would be the only party to win a seat on the first count. With 20% of first preferences, the DUP wouldn’t be too far behind – and would still be comfortably ahead of its nearest competitors.

Meanwhile, the poll (with a margin of error of 2.6 percentage points) finds that the SDLP, UUP and cross-community Alliance Party are in a statistical dead heat. Two factors will be crucial. First, the initial order of the parties based on first preferences will help shape the order in which candidates will be eliminated.

Second, the winner of the third seat will depend heavily on transfers from voters who give other parties their first preference. In other words, the most ‘transfer-friendly’ candidate will be at an advantage – and Brexit positions will likely play a role in the ordering of voters’ preferences.

The UUP’s best chance of retaining its seat will be to secure a high rate of transfers from smaller Brexit-supporting unionist parties like UKIP and, in particular, the Traditional Unionist Voice (TUV). However, the LucidTalk poll suggests that the majority of TUV transfers would go to the DUP, helping its candidate pass the quota. Only about one in five would go to the UUP.

Meanwhile, the strongly pro-European SDLP will be looking for a healthy rate of transfers from Sinn Féin and the Green Party. However, the LucidTalk poll finds that only one in ten Green Party second preferences would go to the SDLP; 71% would go to Alliance, another pro-European party that supported Remain and advocates a second referendum.

If replicated, the poll also suggests that more Sinn Féin transfers would go to Alliance than its nationalist rival. In other words, for the SDLP to win the seat, it needs to be far enough ahead of Alliance on first preferences to avoid Alliance overtaking it on transfers.

The Alliance Party has never held a seat in the European Parliament before. For most of its 49-year history it has found itself in fifth place or lower, behind the main unionist and nationalist parties. However, with newfound momentum from local elections on 2 May, combined with a position on Brexit with cross-community appeal, it has a real chance of making a breakthrough. Not only would this be symbolic in a region where a majority voted to Remain in the EU; it would also mark a small shift in a party system traditionally dominated by unionism and nationalism.

But it’s not there yet. With such slim margins separating the SDLP, UUP and Alliance, and with 7% of voters undecided, the race for Northern Ireland’s third seat in the European Parliament looks set to go down to the wire.