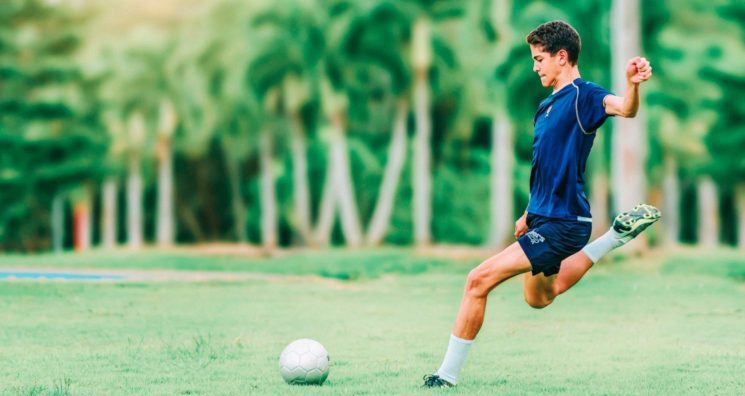 It’s often said that football – the ‘beautiful game’ – brings us together.

As Reinhard Grindel, the former president of the German Football Association, put it: “… in the globalized and digitalized world, sport, especially football, is the last great campfire around which all layers of society gather – poor and rich, men and women, people with and without a history of migration”.

In Europe, millions follow competitions such as the Champions League and the Europa League, which in turn create dynamic – and very lucrative – player markets.

But at the same time, across the continent we can see numerous examples of rumbling discontent, and pushing back against the notion of ‘European’ identity.

In our research we tackle this tension, examining how everyday life activities – like football fandom and spectatorship – impact on the process of European identity formation.

Broadly speaking the formation of identity can be described in two different dimensions:  communities of belonging and frames of references.

The first dimension centres on the process of self-definition and dynamics of inclusion and exclusion – and thus draws our attention to the distinction between ‘us’ and ‘them’, and how groups are constructed and what constitutes ‘the other’.

The second dimension includes the perspective on national competitions, European competitions, and the relationships between them.

Thinking about identity in these terms allows us to study the links between fandom and political attitudes, and leads to our main research question: “To what extent are identities of football fans across Europe ‘Europeanised’?”

These cover three of the five major European football leagues – the German Bundesliga, the English Premier League, and the French Ligue 1 – and also the less represented Austrian Bundesliga.

Every selected case differs in key factors, covering three contexts of football spectatorship – the country, the league, and the club – and looking across these three levels gives us a view of the possible interrelationships between fandom and European identity.

At the country level, we can assume that the attitude towards the EU in the wider public discourse is potentially influencing the identities of fans; the football leagues vary in the ratio of foreign to domestic players; and the clubs differ in their presence in European competitions.

Preliminary results show that ‘Europe’ has generally a major impact on online fan discussions, both related to the way they include and exclude others, and even more importantly as a reference for their self-understanding.

For example, a Manchester United fan wrote “I don’t know how people can have any confidence in us kicking out Bayern, Juve or Real. We will either park the bus for 180 minutes and still go out close or they will wipe the floor with us in one game and decide the tie.”

Our findings also confirm the assumption that what we call the process of Europeanisation of football shapes fans’ perceptions and identities relating a national perspective with ‘Europe’.

Look at how, in this quote, the European and national footballing contexts are explicitly linked together:

“I think that qualifying for a European competition is very important for the future, especially if we want to return to the forefront of Europe, as Atletico Madrid, Sevilla and Liverpool have done. I think we have to qualify for the Europa League, and since I don´t believe in winning the League Cup or the French Cup in 2016, I want us to be able to get a 5th place in Ligue 1.” (Olympique de Marseille fan, 2016).

However, our analysis also highlights how different factors might influence the extent to which an arena such as football can shape fans’ identities with regards to Europe.

The comparative analysis of the discussions contradicts our assumption that the distinction between Eurosceptic and Eurofriendly public discourse determines fans’ perspective on ‘Europe’.

While for English fans – embedded in a somewhat Eurosceptic political discourse – it’s natural to see their top clubs playing in, or even winning, European competitions, the picture is more complex in France and Germany.

Moreover, Austrian football fans primarily focus on their national league, mainly due to a lack competitiveness: one Sturm Graz fan wrote that “[p]articipating in the Champions League is utopia, too many clubs are simply playing out of our league!”

The stronger driver of expressions relating to in/out-groups seems to be the level of Europeanisation of the player market.

While in our data English fans mostly use explicit arguments based on performance or ability, only a few – in line with Sol Campbell – emphasise non-sporting criteria, and especially the origin of a player. For example:

“Are people honestly happy with not having a single British player, never mind English, never mind homegrown (disregarding Pogba, who we brought in from france), in our starting XI?” (Manchester United fan 2018)

The frequency of European appearances matters for the perspective of fans on Europe. Unsurprisingly, there is a stark difference between top and lower teams.

While the fans of the top teams are much more oriented towards rivals on the European level, relegation battlers are focusing foremost on national Championships.

“… the day the % of successful passes will be at least 75% or even 80%, on a regular basis, then we can aspire for a place in the Europa League and a place in the final of one of the cups. At the moment, we’re light years away.” (Toulouse FC fan 2017)

However, an additional aspect can be found in the Austrian and French cases where the Sturm Graz and Olympique de Marseille fans consider their clubs’ presence in European competitions as an opportunity to represent the country and league on the European level:

In a nutshell, these insights indicate that the assumed aspects – Europeanisation of the player market and appearance in European club competitions – could influence the mindsets of football fans.

Their identities, in terms of their community of belonging and their frames of references, show traces of ‘Europeanisation’, albeit in various ways and degrees.