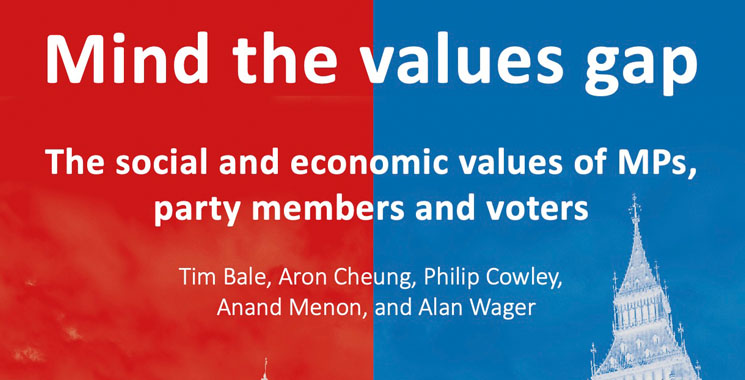 Seventy-three per cent of voters think ‘there is one law for the rich and one law for the poor’ whereas only 5% of Tory MPs agree, which is one of several big differences between Conservative and Labour MPs and their voters, a new academic report uncovering the social and economic values of MPs, party members and voters finds.

Drawing on original data – a representative survey of MPs conducted by Ipsos Mori – and new analysis of data from the ESRC’s Party Member’s Project and British Election Study, the report Mind the values gap: The social and economic values of MPs, party members and voters provides a deep dive into the social and economic values of the Labour and Conservative parties from top to bottom: MPs, party members and voters.

It shows the Labour Party is fairly well-aligned with voters on economic issues but a long way away from them on social values. For the Conservatives, the opposite is the case.

The views of Labour MPs and members on fundamental questions about the economy are significantly more in tune with the instincts of their voters and the general public than are those of the Conservative Party.

Perhaps surprisingly, the voters who made the journey from Labour in 2017 to Conservative in 2019 are more left wing on economic issues than the average member of the public.

Yet when it comes to social values these switchers are significantly more authoritarian/socially conservative even than the average Conservative voter.

Philip Cowley, Professor of Politics, Queen Mary University of London said: “The fact Conservative MPs so strongly reject widespread perceptions of structural unfairness hints at the challenge the Johnson government will face if the shock of Covid-19 triggers public demand for economic redistribution and reform.”

“If a sense ‘there is one law for the rich and one for the poor’ begins to take hold, then the gap between Conservative Party people and voters could prove deeply problematic for the Johnson government.”

Professor Tim Bale, deputy director of the UK in a Changing Europe, said: “If the economic downturn that many are forecasting can be persuasively blamed on Covid-19 and social and cultural values therefore remain at the forefront of political debate, then only one party – the Conservative Party – looks likely to benefit. No wonder some top Tories are said to be pressing the PM to launch a so-called ‘war on woke’.”

Professor Anand Menon, director of the UK in a Changing Europe, said: “The Labour and Conservative Parties clearly have an interest in focussing political debates on very different issues.”

“For the former, values are a way of holding their coalition together, while continuing to appeal to 2019 Labour-Tory switchers. For Labour, the focus must be on economic policy, not least given intra-party divisions on values issues.”