BMW slams the brakes on electric MINI production at Oxford 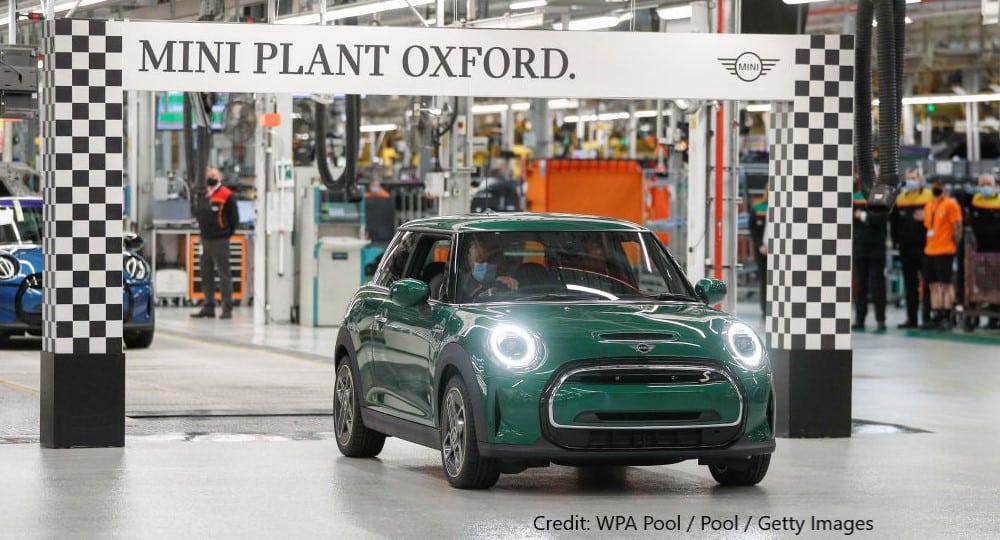 David Bailey looks at the implications of BMW’s decision to stop producing the electric MINI at its Oxford plant and sets out what the decisions tells us about the UK automotive industry post-Brexit.

At a time when the auto industry is shifting towards electric vehicles (EVs), news that BMW will stop building the MINI EV (based on the 3rd generation MINI) in Oxford comes as a blow to hopes that the UK auto industry could charge up EV production.

Around 40,000 MINI EVs are currently made every year at the Oxford MINI plant. The model has been popular with drivers and has picked up numerous awards.

BMW denies that it is ‘shifting’ production to China. It announced back in 2019 that it would make an electrified 4th generation MINI with its Chinese Joint-Venture (JV) partner Great Wall from 2024 (which will be exported, including to Britain). That distinction may be rather lost on those who see MINI EV production ending in the UK and starting in China.

As a result, remaining MINI production at Oxford will be entirely based on petrol internal combustion engines (ICEs). These have a time limited life in European markets. In the UK a ban on ICEs comes into place in 2030. The situation at the Oxford plant reflects the bumpy road faced so far for EV production in the UK.

Recent investment announcements by Nissan and by Stellantis raised hopes that UK auto is finally pivoting to EV production after several years of investment stymied by Brexit uncertainty. Those lean years saw Honda pull out of the UK to focus EV production back in Japan and Tesla bypass the UK and head to Germany to build batteries and cars.

Jaguar Land Rover (JLR) pulled out all the stops in getting its first EV – the Jaguar i-Pace – to market, but that model is assembled in Austria. A new Jaguar XJ EV was almost ready to go into production before being abruptly binned by the new JLR Chief Executive Thierry Bolloré last year. New Jaguar EVs are not now expected until 2025 and the firm is lagging behind rivals. Meanwhile Lotus, owned by Chinese firm Geely, is set to produce its new Electre EV SUV in China.

Back to BMW, what’s going on? The MINI EV assembled at Oxford was essentially a 3rd generation model which had been retrofitted as an EV given tightening EU emissions rules, and built in a factory equipped to make ICE cars. The plant was part-adapted in 2019 to make the EV version. However, the assembly line needs extra labour for each EV model with the battery imported from Germany, and is ‘not geared for mass production’ of EVs.

With a new 4th gen MINI EV ready to be produced in China (no doubt at much lower cost), the decision was made to switch Oxford production back to ICE cars (with engines made at Hams Hall near Birmingham).

That might make some sense from a corporate point of view but raises two big questions about the future of UK auto in general and the Oxford plant in particular.

The first question is over what needs to done to encourage more investment in EV production in the UK given the patchy start so far. Large scale battery production is key to that – something on which the UK is lagging behind (see BritishVolt apparently stalling in its efforts to set up a battery gigafactory).

This is critical as the post-Brexit Trade and Cooperation Agreement (TCA) requires that by the end of 2026 there has to be 55% local content for EVs and that batteries have to be assembled in the UK or the EU for the vehicle to qualify for tariff-free trade. This will pose a particular challenge for UK auto and industrial policy.

The second is over the future of the Oxford plant itself. Transforming Oxford into an EV assembly plant will require significant investment. BMW has hinted that this may still happen, but has yet to set a date and the investment case hasn’t as yet been made. MINI’s CEO Stefanie Wurst says that Oxford is in an ‘intermediate phase’.  But to what, exactly?

With car makers operating on a 7-8 year life cycle, that leaves the Oxford plant looking for a MINI EV at the end of this decade, unless a mid-life upgrade to the model could open up earlier investment.

But whether Oxford gets this far under BMW ownership isn’t clear. Despite BMW pledging that Oxford would ‘remain the heart and home of Mini manufacturing’ the firm has been forced to deny speculation that it may seek to sell the plant to Great Wall.

The idea has in part been stoked by the recent chip shortage; this has seen automakers like BMW prioritising models with the highest margins, rather than smaller cars like the MINI.

Asked whether Oxford could at some point build both Minis and Great Wall, Wurst replied ‘maybe.’ Meanwhile Great Wall is reported as saying that the possibility of producing its own models in Oxford had been the subject of ‘internal discussion.’

Great Wall taking over the running of the Oxford plant could on the one hand open up the possibility of investment and new brands being made there, such as the Ora brand (its ‘Funky Cat’ model will go on sale in the UK in 2023). But such a move could risk continued MINI production there, as the latter would depend on the BMW-Great Wall partnership continuing.

MINI’s CEO said that ending MINI EV assembly in the UK wasn’t linked to post-Brexit supply constraints and cross-border friction with the EU, or by the lack of a nearby battery gigafactory. That may be accurate in that the Oxford plant wasn’t running optimally by assembling both ICE and EV models on the same line.

But what’s also clear is that Brexit hasn’t helped the competitiveness of UK plants like Oxford, and the lack of local battery gigafactories is likely to be major issue down the line if EV assembly is to be anchored in the UK. And on that, the UK government needs to do much more to back the industry’s transformation to an EV future.