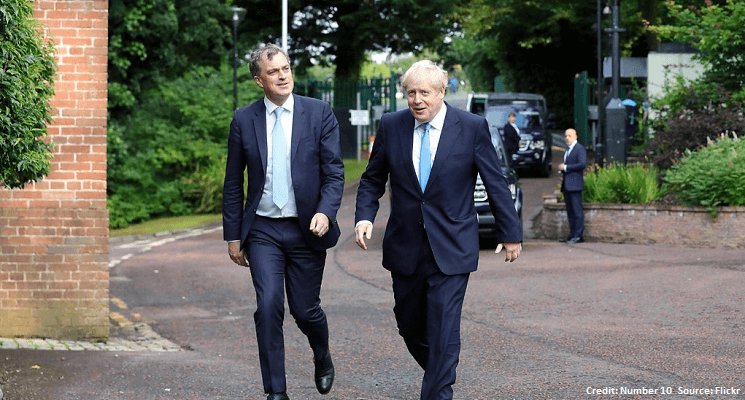 Boris Johnson made his first venture across the Irish Sea since becoming Prime Minister last week. Unsurprisingly, there was much discussion of Brexit, backstops and border polls in a day that featured protests, statements and counter-statements. Here are a few takeaways…

In meetings with the five main Northern Irish parties, Johnson nodded to the commitment made by both the British and Irish governments in the Belfast / Good Friday Agreement to exercise any sovereign powers possessed in respect of Northern Ireland with “rigorous impartiality on behalf of all the people”.

However, the UK government’s capacity and willingness to act without partiality has been repeatedly called into question since the Tory-DUP agreement was signed in March 2017. Yesterday, DUP leader Arlene Foster strongly defended that alliance, stating it to be “good for the people of Northern Ireland”. Meanwhile, the SDLP’s Nicola Mallon, who described her meeting with Prime Minister Johnson as “blunt”, suggested that he must “stop pandering to the DUP”, and Sinn Féin leader Mary Lou McDonald reported telling the Prime Minister that “nobody believes” his claim to absolute impartiality.

The ability, or otherwise, of the UK government to act impartially is not the most relevant question here.

Sadly, on this issue, trust is in short supply.

Among the protesters waiting to greet the Prime Minister at Stormont was a group of Harland and Wolff workers calling for the re-nationalisation of the iconic and crisis-hit shipyard that is at risk of closure.

Harland and Wolff has a long and proud history in Northern Ireland. Traditionally, employees have come from the Protestant/Unionist working-class of inner-city Belfast. At one point yesterday, the shipyard protestors joined with protestors from An Dream Dearg, an Irish Language advocacy group, to chant Sábháil ar gclós –‘save our shipyard’ in Irish.

This was a small indication of how Northern Ireland is changing.

According to the most recent Northern Ireland Life and Times Survey, 50% of people in Northern Ireland now identify as neither Unionist of Nationalist. This figure has been steadily growing since 1998, when just 33% identified as ‘neither’.

Since the 2016 referendum, the number of Northern Irish people applying for Irish passports has sky-rocketed – a trend the previous Secretary of State Karen Bradley acknowledged as a potential indicator of the “public mood on the whole issue of self-determination [i.e. a border poll]”.

Such signs of change raise fundamental questions for the future of Northern Ireland. The structure of devolution here was designed on the understanding of the place as divided between two relatively cohesive ethno-nationalist blocs: Nationalist/Republican/Catholic and Unionist/Loyalist/Protestant.

Political representation and voting behaviour still, broadly, reflects the ‘two community thesis’ but it does so in decreasing measure. Northern Ireland, it seems, on an inexorable trajectory toward political pluralisation.

One can expect ‘bread-and-butter’ political issues about the economy, jobs and social welfare, represented by Harland and Wolff workers at Stormont, to be of paramount importance to Northern Irish voters as Brexit continues to unfold.

Commenting yesterday Arlene Foster reiterated her party’s position that they “don’t want a no deal”. Yet, the DUP are now supporting a Conservative government that has made it abundantly clear the UK will be leaving the EU in October “come what may”.

While the DUP advocate amending the backstop to introduce a time-limit, Johnson says it has to go.

In Northern Ireland, who voted 56% in favour of Remain, successive polls have revealed majority support for soft Brexit options, such as that provided for in the backstop, regardless of what post-Brexit arrangements are agreed for Great Britain.

Northern Irish business, civil society, trade unions, industry representatives and even the civil service have spoken openly and consistently against a no deal Brexit and in favour of the backstop arrangement.

The thin isthmus of political ground connecting the DUP to Westminster, on which the party has stood for the last two years, appears to be narrowing.

Viewed from Northern Ireland, the most recent epithet attached to the backstop rings hollow. Northern Ireland has been without government for 927 days and counting. Under the Northern Ireland Executive Formation and Execution of Functions Act, new legislation can be introduced on a rushed time schedule with very little scrutiny; a House of Lords Constitution Committee report said this arrangement, “would not be acceptable…in any other circumstances”; stating further that “no part of this Bill [later Act]…should be taken as a precedent for future legislation”.

Use of unconventional legislative means to make law on behalf of Northern Ireland was further evidenced some weeks ago when amendments on controversial issues tabled to the primarily technical Northern Ireland (Executive Formation) Bill passed. As a result, if devolved government is not restored between now and 21 October, there will be a radical change in abortion law, the introduction of equal marriage and the implementation of compensation and pensions for victims of the Troubles and historical institutional abuse.

Regardless of one’s position on the substance of these legal provisions, the means by which they came onto the Northern Irish statute book are not impressive by any standard of democracy.

As the prospect of Brexit looms, this could have set a concerning precedent for Northern Ireland. Passing last minute additions to technical bills for Northern Ireland, and fast-tracking these through the House of Commons under emergency procedures, has been proved possible.

By comparison, “the undemocratic backstop” might not seem so bad.

Lingering on without a functioning government while enjoying, and enduring, a starring role in national politics; Northern Ireland is quietly progressing through the perfect political storm.

I doubt any level of “can do spirit” will be enough to get through.