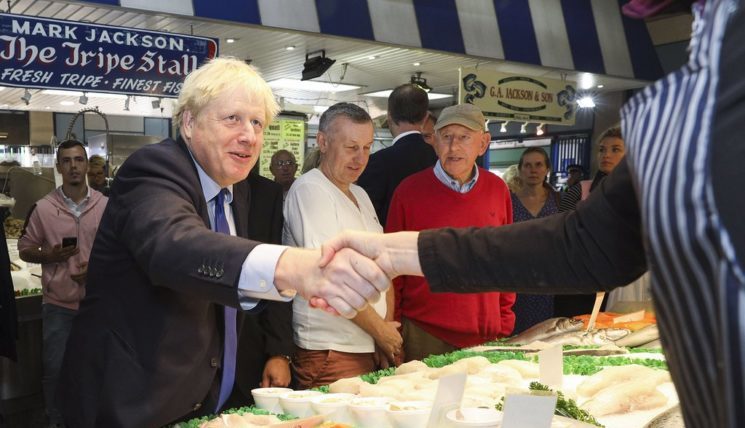 “Get Brexit done.” The phrase certainly has a powerful ring to it. More than that, it fulfils two obvious electoral purposes. It avoids political discussion of what “doing Brexit” might actually involve.

And, more practically, it provides a phrase that can be memorised and repeated ad nauseum on rainy doorsteps and in online advertisements. After three years of Brexit debate, as the UK has tried and failed to leave the European Union, why wouldn’t it strike a chord?

What, then, is the problem? The simple answer is that it’s profoundly misleading. Let’s assume – and it’s quite an assumption – that things go smoothly for the government. Boris Johnson’s electoral gamble pays off.

He comes back on 13 December at the head of a majority government. At that point, he may still struggle to “bang Brexit through” by Christmas because parliament resumes sitting only on 17 December, and then there is the small matter of swearing in 650 MPs, and a Queen’s speech and subsequent debate. However, with a majority, he should be able to pass his withdrawal agreement bill in order that the UK finally leaves the European Union on 31 January.

So far, so simple. Yet Brexit will at this point be far from “done”. Exit will represent the end of stage one, the point at which the United Kingdom ceases to be a member state of the European Union. It then goes into an 11-month holding pattern known as transition, which expires on 31 December 2020.

And now for some semantics. This government and its predecessor have insisted on using the phrase “implementation period” to describe transition and that is the wording which appears in the bill. The reference to implementation is, to say the least, profoundly misleading. Why? Because we have absolutely nothing to implement. Instead, this period will be used for trying to sort out the future relationship between the UK and the EU.

Researchers at the Institute for Government have provided a good guide as to how long these negotiations typically take (about four years). To summarise, when you look at recent free-trade agreements signed by the European Union, it becomes clear that an 11-month transition period is simply too short to allow for negotiation.

It is true that the time it takes to negotiate a deal will hinge on what kind of deal the parties want. Michel Barnier, the EU’s chief negotiator, has accepted that a “basic free-trade deal” could possibly be negotiated by the end of next year.

Yet this raises numerous questions. For one thing, a basic deal on tariffs would risk falling foul of EU member states worried about the danger of Britain having tariff-free access to the EU market but able to cut standards, including workers’ rights. For another, the government has repeatedly claimed it is seeking a “best-in-class” trade deal. One can only wonder what kind of class it has in mind.

And the UK has a major interest in a much broader trade deal, covering services and internal security matters, such as access to EU databases, which have proved essential for combatting international crime. All of this points to the UK wanting a much more substantial and wider-ranging trade deal than the basic model. And this will take time – maybe years.

This brings us back to the reality that 11 months of transition will simply not be enough. Which means asking for an extension. The withdrawal agreement allows for this: it provides that the joint committee of UK and EU representatives “may, before 1 July 2020, adopt a single decision extending the transition period for up to one or two years”.

Johnson has said that he will not ask for an extension to the transition period, and so many fear a new cliff edge or no-deal Brexit on 1 January 2021, as the UK leaves the transition period without a (comprehensive) trade deal. The prime minister laughs this off. The UK, he argues, is in a unique situation: it starts from a position of alignment with EU rules.

But this is a red herring. Never before has a state negotiated a (less than) free-trade deal distancing itself from a major trading partner. And the EU will wish to scrutinise very carefully what dealignment actually means in practice. Clause by clause, chapter by chapter, the negotiations will be painstaking and time consuming. The divorce will be achieved, but the new relationship will be in limbo.

And let’s think about that new deal. Unlike during the article 50 period, each of the EU’s member states will be intimately involved, and, assuming the deal sought is an ambitious one, it is conceivable each will enjoy a veto.

Expect, then, each national capital to come up with its own list of desiderata that it wants included in any future deal. And add to the fact that, because this is a deal intended to make trade harder rather than easier, we will be dealing solely with losses. In a normal trade negotiation, there are “wins” with which to offset concessions. Not so here. So ratification might be expected to be particularly tough.

So the choice is relatively clear. Either a lengthy, and potentially rancourous, process that will belie the idea of “getting Brexit done”. Or a short, sharp negotiation ending with a short, thin agreement that raises the prospect of years of adjustment as the UK economy adapts to a far looser relationship with its largest and nearest trading partner. No one should think it’s going to be all over anytime soon.