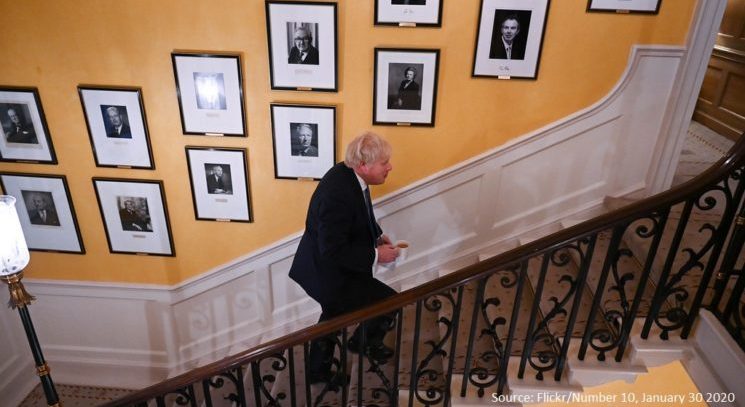 On 12 December 2019, Boris Johnson emerged from the general election counts having achieved the biggest majority of any Prime Minister since 2001, and the biggest Conservative majority since 1987.

This gave him a commanding authority in the country, and within his own party, the first consequence of which was the successful passing of the Withdrawal Agreement. The UK subsequently left the EU on 31 January 2020.

The second major consequence could be seen in the reshuffle of 13 February – most significantly in the departure of the then Chancellor of the Exchequer, Sajid Javid.

The Chancellor’s departure is notable primarily for how it illustrates Boris Johnson’s total control over his party and government. Javid himself commented that he resigned because the conditions for him continuing were such that ‘I do not believe any self-respecting minister would accept [them].’

These conditions in the main consisted of two elements: first, that Javid sack all his existing Special Advisers; and second, that a joint No10/No11 ‘Spad Unit’ be set up to pool the political staff between the two most powerful addresses in Whitehall.

He felt that ‘pool’ in this case basically meant the loss of Special Advisers directly answerable to him, as Chancellor. The fact that Boris Johnson was able to even attempt to force such conditions on his Chancellor, and accept Javid’s resignation without much in the way of political damage, shows the PM’s level of control.

In addition, Javid’s successor, Rishi Sunak, is one of the least politically experienced politicians to ever hold one of the four Great Offices of State. As such, and with his acceptance of the Joint Spad Unit he is already seen as having very little in the way of independence from No10.

This is significant because of the way the relationship between Numbers 10 and 11 Downing Street has often worked. Chancellors of the Exchequer have usually been heavyweights in their party, and as such their relationship with their neighbour has been an important element in how the government of the day worked.

The nature of this relationship has usually sat somewhere on a scale from collegial (e.g. Cameron/Osborne); via strained, but no more so than is usual for top level politics (e.g. May/Hammond); and bitter rivals (e.g. Blair/Brown).

What is relatively unusual, simply because of the seniority of the person usually holding the post as Chancellor, is subservience. Javid was relatively weak, and did not last long, partly because he tried to maintain some level of independence. Sunak, in contrast to almost every recent predecessor, is arguably not just weak, but a quintessential Chancellor-in-name-only.

This does not mean that the Treasury is powerless – it has a significant level of institutional resilience – but it does mean that unlike in most recent governments, Sunak is much less likely to be a significant player, as rival or partner (or somewhere in-between), to Johnson.

This also has consequences for the next Labour leader. Whilst Johnson is – for the moment – in total control of his party and Cabinet whoever wins at the end of the seemingly endless leadership contest will face a very different (Shadow) Cabinet environment compared to the PM.

Jeremy Corbyn eventually presided over a fairly united Shadow Cabinet, and his relationship with John McDonnell was clearly very much at the ‘collegial’ end of the spectrum. However, this relative cabinet unity was achieved largely by ‘exporting’ disunity to the rest of the parliamentary party.

Each of the three main contenders for the leadership will face a different ‘unity’ problem, both in relation to the parliamentary party and the wider membership. Arguably, Lisa Nandy and Rebecca Long-Bailey have opposite problems.

As a relative moderate Lisa Nandy would probably find support amongst a majority of the parliamentary party. However, having resigned from the Shadow Cabinet in protest at Corbyn’s leadership and supported his opponent in the 2016 leadership contest, she is likely to get a lukewarm reception from Corbyn supporters in the parliamentary party and the membership (35% of whom rated Corbyn as the ‘best Labour leader in recent times’).

Long-Bailey, on the other hand, will face deep scepticism from the same elements of the parliamentary party who opposed Corbyn, to the point of some of them possibly resigning in various forms.

Keir Starmer, being also a relative moderate – albeit one who stayed in the Shadow Cabinet – is probably the one hopeful who has the highest potential for achieving some level of unity.

However, regardless of who wins the Labour Party leadership contest, this reshuffle illustrated with total clarity he or she will be faced with a Conservative Party which is united behind their leader in a way that has not been the case for a very long time.

How Labour manages to provide opposition in the face of such unity will have wide reaching consequences for where the UK goes from here.

By Dr Robin Pettitt, department of politics at the Kingston university.