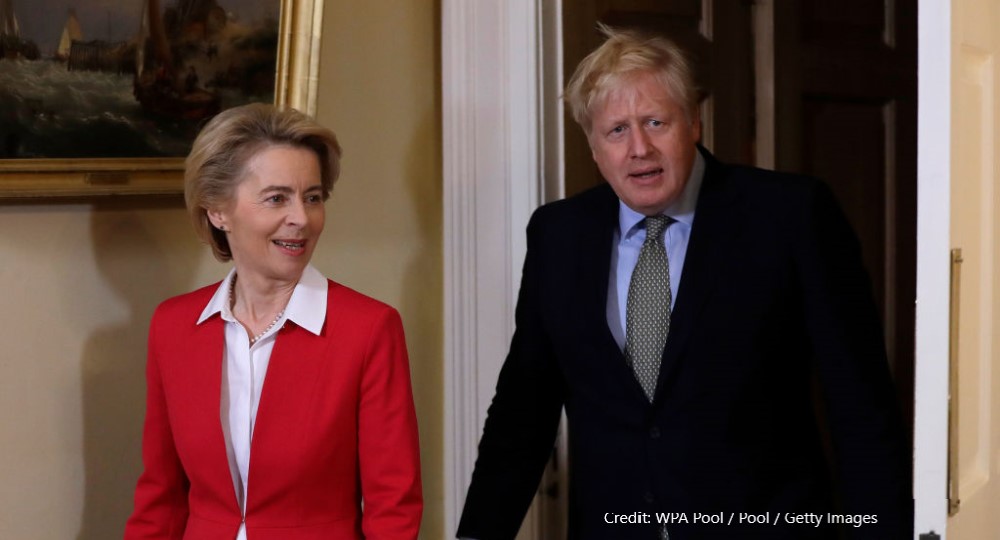 Boris Johnson’s dinner in Brussels this evening with European Commission President Ursula von der Leyen is being billed as an event that will either make or break a UK-EU trade deal.

However, a more likely outcome is the messy middle—neither a breakthrough, nor a breakdown.

The two recent calls between the two figures have failed to end the impasse, but ended with a commitment to keep trying. Tonight might see a similar pledge as both Johnson and von der Leyen acknowledge the need to give the stalled technical negotiations some political impetus.

Despite the pessimism in Downing Street about the prospects of a deal, cabinet ministers believe Johnson would not have agreed to go to Brussels without having some hope of pulling one off.

And yet, even at this very late hour, Johnson might not play his final cards. Despite denials by senior UK officials, Johnson is trying to draw EU leaders into the negotiations, and wants tomorrow’s European Council to address the issue (not formally, but in the margins) in the hope this might produce some concessions and flexibility within the EU’s mandate.

Indeed, part of the reason the government dropped the controversial clauses in its Internal Market Bill and Taxation Bill is to promote a more difficult discussion among the EU’s 27 member states. Rejecting concessions out of hand would have been easier were the government still signalling its willingness to break international law.

However, the attempt to win more flexibility from Europe, by hoping to expose differences between Germany’s Angela Merkel and France’s Emmanuel Macron, is not going to work. Johnson wanted Merkel and Macron to join his phone call with von der Leyen on Monday night, but she rebuffed the idea.

The UK has consistently overestimated its ability to play ‘divide and rule’ among the EU27. Indeed, the simplistic ‘Germany versus France’ picture is dismissed as wishful thinking in Brussels.

However, the difference this time is that the Downing Street is hoping to maximise time pressure to try to provoke cracks in the EU’s almost-united front.

It is true that Chancellor Merkel wants to safeguard the EU’s strategic relationship with the UK, and also wants to crown her EU presidency—and legacy—with a success.

However, she will not do anything to split the EU, and will be sensitive to Macron’s tougher stance, not least because the French President did not break with her on the rule of law budget stand-off with Poland and Hungary.

Paris was keener to forge ahead with a ‘coalition of the willing’ to implement the landmark Covid-19 Recovery Fund that EU leaders agreed in July.

For this reason, French officials were relaxed about the idea of Johnson attending the summit, arguing it would not change the EU’s “fundamental” approach.

If Johnson wants, for presentational reasons, to come to Brussels to see von der Leyen in the margins of the summit and claim that he has achieved “miracles and wonders”, then fine.

However, “the miracles will have to come from him”, they argue, suggesting Johnson will still have to move significantly more on the level playing field and fish if a deal is to be struck.

Some Johnson allies do suspect the Commission President is more sympathetic to making compromises and more prepared to stand up to Macron than Michel Barnier, the EU’s chief negotiator. That is one reason why Johnson wants to meet von der Leyen.

Although their calls are described as polite rather than occasions which forged a close working relationship, UK officials recall that Johnson did not “bond” with Leo Varadkar, his Irish counterpart, until they went for a walk without their aides in the garden of a hotel in Wirral, Merseyside, to personally broker a Withdrawal Agreement last year. Again, that was a time when the UK appeared to be heading for no deal.

When he goes to Brussels, Johnson will also become his own chief negotiator. He will have the freedom to make concessions that David Frost, his chief negotiator, did not.

A crunch issue is whether the EU will move enough for Johnson to be able to feel he can accept their final offer.

Some ministers believe a trade-off is still possible, with the EU giving ground on fisheries to give Johnson enough to claim a headline-grabbing victory at home, while he makes concessions on the less politically visible and more technical level playing field issue. There are signs that some Brexiteer Tory MPs would buy into that strategy.

In the event tonight’s dinner is constructive, that will create more positivity at tomorrow’s European Council. A continuation of negotiations in Brussels on Friday is then being considered by Downing Street, to enable more technical progress.

Another interpretation of Johnson’s visit to Brussels is that he expects talks to fail and wants an insurance policy against no deal–that he tried his best to avoid it.

Indeed, if this evening goes badly, more hostile noises can then be expected from tomorrow’s EU summit—pointing to differences rather than points of convergence, and stressing the need to focus on no deal planning—probably at doorstep press conferences, as there will be no Council conclusions on Brexit.

The next few weeks are therefore critical. Johnson is prepared to negotiate “up to the wire.” His allies define that as 31 December, when the transition period ends.

If necessary, senior government officials say the legislation approving a deal could be rushed through Parliament in a day, even between Christmas and New Year, when it is not scheduled to sit.

But Johnson is adamant he will not allow negotiations to run into 2021, as some on the EU side have suggested could happen. The moment of truth for both sides is therefore fast approaching.