Both EU campaigns need to reach beyond their core supporters

The June 23 referendum on Britain’s continued membership of the European Union looks set to be a close race.

According to the current Poll of Polls this week both camps are on 50 per cent.

This is why the grassroots campaign – how effective the Remain and Leave camps are at targeting and mobilising their support – could make all the difference.

But which areas of the country are they targeting?

This is the question I have set out to answer with my colleague, Caitlin Milazzo, at the University of Nottingham.

We are compiling a database of all events held by the Remain and Leave camps, as listed on their websites.

The dataset might not be completely accurate, because it depends on the campaigns sharing this information but to ourknowledge it is the most comprehensive. So if you are about to write in and complain that we have not included that Saturday you spent leafleting in your local village, then do us a favour – make sure it is listed on one of the official websites! Where possible, we have searched national and local media to check information about the events.

So what did we find?

After matching all events held so far to individual constituencies we have produced the map below.

This is what the battleground looks like in England and Wales, as at the beginning of April. 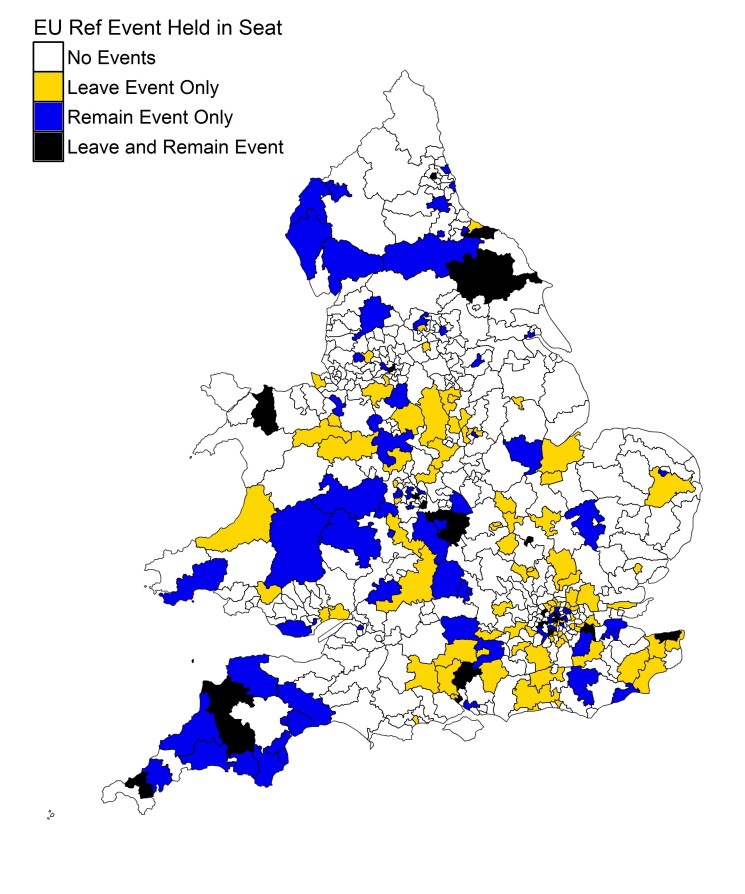 We then wanted to examine whether the campaigns have been holding events only in their heartlands, or trying to extend the fight to their opponents by targeting less friendly areas.

Has the Remain camp been aiming at areas with lots of pro-EU voters? Or has it been targeting more evenly divided territory … or perhaps even seats that are more heavily Brexit-minded?

To do this we matched our data with other data collected by our academic colleague Chris Hanretty, who has examined likely levels of public support for Brexit in each constituency.

By doing this we found that both campaigns are currently tending to hold events in areas where there are large concentrations of their own supporters – something that might seem rather obvious.

For example, some 37 per cent of all events organised by Remain have been held in “hard Europhile”areas where public support for Brexit is predicted to drop below 45 per cent.

And of all the events organised by Leave, about the same percentage, 35, have been held in “hard Eurosceptic” areas where public support for Brexit is predicted to top 55 per cent.

If we adopt a slightly broader view, we find that just over 50 per cent of Remain events have been held in hard or soft Europhile territory and 62 per cent of Leave events in hard or soft Eurosceptic territory. This might suggest that the Brexiteers are slightly more preoccupied with their heartland areas – which, given evidence that Outers are more committed to voting on June 23, is something the Remain camp might want to watch closely.

This focus on mobilising core voters rather than trying to campaign in more difficult territory can be seen in how Leave has been specially active along the eastern half of England, in places like Kettering, South Holland and The Deepings, Epping Forest, Norfolk, Thurrock, North Thanet, and Folkestone & Hythe.

It appears that, so far at least, the Leave camp is trying to ensure that its older, white and more economically disadvantaged voters who identify strongly with Englishness turn out to vote.

Remain campaigners have been notably active on the ground in very pro-EU seats in London, like Hornsey & Wood Green, Kensington, Islington South and Finsbury, as well as in a notable cluster of seats in southwest England, like Bristol West, Exeter, Torbay, and Torridge & West Devon, and diverse cities like Birmingham, Oxford, Manchester and Nottingham.

In statistical terms, seats in which half of all voters favour Brexit have less than a 20 per cent chance of witnessing a Remain event. But where only one voter in five favours Brexit the likelihood of seeing a Remain event increases to 50 per cent.

Both camps, at least at this early stage, appear to be hunkering down in their heartlands, focusing on mobilising their current supporters rather than dwelling heavily on more divided territory.

Only a fifth of Leave events have been held in hard Europhile seats. Remain seems to have made a little more effort, but even so only one in four of its events have come in solid Eurosceptic territory.

All of this, of course, might make good strategic sense. Is Remain really going to convince a diehard Ukipper to change his or her vote? Or is Leave really going to persuade a passionate Liberal Democrat about the perceived glory of Brexit? Probably not.

But where all of this does matter is that it is likely to contribute to what is already a highly polarised campaign. Given the geographic focus of the two groups, it seems unlikely that this is going to be a great example of deliberative democracy at the grassroots.

Lastly, our mapping project also reveals how the campaigns could be missing some fairly big opportunities to mobilise support.

According to our data some of the most Brexit-minded areas of the country have so far escaped serious attention – places like Christchurch, Blackpool, Boston & Skegness, Louth & Horncastle, Norfolk, Dudley & Waveney.

Meanwhile, those fighting to keep Britain in the EU might want to explore why they are not as active as they could be in more diverse, young and urban areas like Manchester, Edinburgh, Hackney, Cambridge or Brighton.

Still, both sides have 70 or so days left to work on their campaigns …

This piece was written by Professor Matthew Goodwin, senior fellow at The UK in a Changing Europe. It originally featured in The Times.